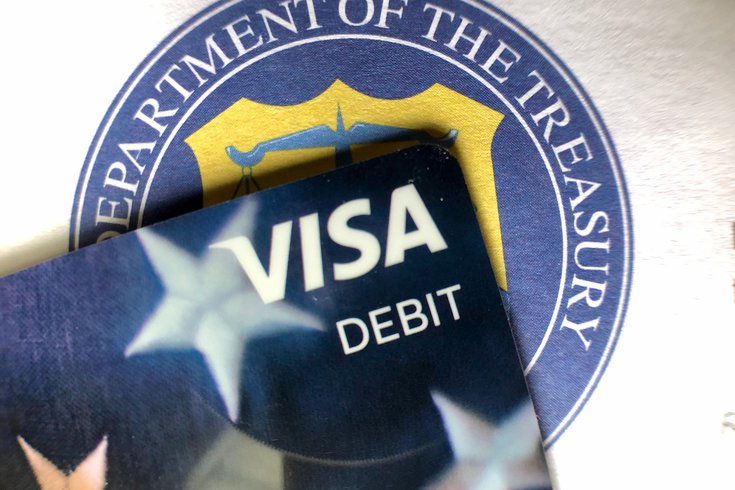 About 4 million U.S. citizens received their coronavirus stimulus checks via a pre-paid debit card, like the one shown above. This has caused confusion, and some recipients have mistaken the nondescript envelope the in which card arrives for junk mail.

Four million people in the United States will receive their economic stimulus in the form of a prepaid Visa debit card instead of a check, the IRS announced in a memo this week.

Already, the alternative coronavirus stimulus rollout is causing some costly confusion across the country.

Most Americans who qualified for the federal stimulus money have either received their money via direct deposit into their bank accounts or have begun to get paper checks in the mail.

In a memo Tuesday, the IRS said four million people were selected by the Bureau of Fiscal Service — a part of the U.S. Treasury Department — to receive the stimulus on an Economic Impact Payment debit card.

These determinations appear to have been made based on whether a person did not submit bank account information to the IRS before May 13 and if their most recent tax returns were processed by IRS Service Centers in Andover, Massachusetts, or Austin, Texas.

Arriving in an unassuming paper envelope from Money Network Cardholder Services, the coronavirus stimulus check debit cards have been mistaken by some as a scam or a junk-mail credit card offer. The packet comes with an explanation and instructions on how to activate the card for use.

A Chapel Hill, North Carolina, woman told ABC11 that she thought the card was fake. To be safe, she cut it up and threw it away.

"Why would anyone send me this card?" the woman wondered. "It must be a scam."

Days later, the woman saw a news report about the EIP debit cards and recognized she'd made a big mistake.

In Arlington, Texas, another woman said she received a plain white envelope from Omaha, Nebraska. She didn't realized what it was and had to place several calls to have the card activated, also fearing the whole time that she was being scammed.

When the Texas woman didn't receive answers from the FBI or the Federal Trade Commission about the safety of the cards, she and her husband decided to put it to the test by buying dinner. It worked.

"I was becoming increasingly concerned that this was identity theft of some sorts. I really was," the woman told CBS11.

The IRS said the EIP debit cards can be used in the following way without any fees:

• Make purchases online and at any retail location where Visa is accepted
• Get cash from in-network ATMs
• Transfer funds to their personal bank account
• Check their card balance online, by mobile app, or by phone

Since the debit cards first started arriving, some state attorneys general have notified residents to be on the lookout for their stimulus payments and assure them the cards are not a scam.

Fortunately for the woman in Chapel Hill — and anyone else who throws away their EIP stimulus — the cards can be replaced. You can call (800) 240-8100 or find replacement information online.

Congress continues to deliberate the possibility of a second round of stimulus payments that could be contained in the Heroes Act, another massive recovery bill under consideration to address the economic fallout of the coronavirus pandemic.