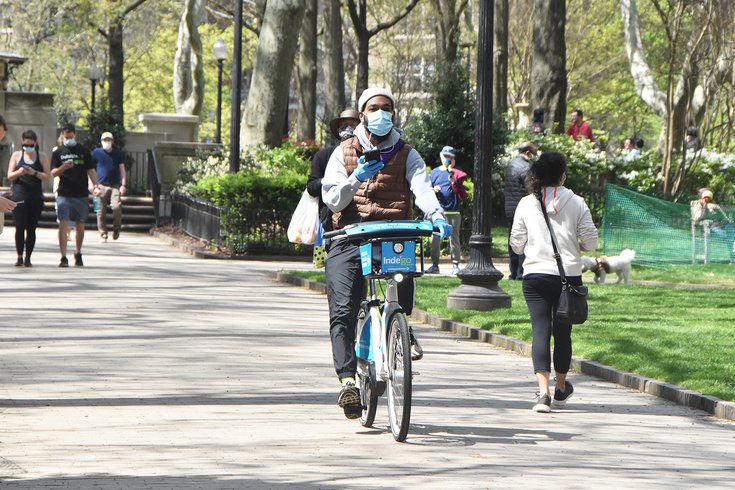 A May survey of Philadelphia residents found a majority believe strong public health response and guidelines are very important during the COVID-19 crisis.

Three-quarters of Philadelphia residents believe all city residents should be wearing face masks whenever they leave home during the COVID-19 crisis, according to the results of a public health survey city officials released Wednesday.

The online survey was conducted by the city in partnership with the University of Pennsylvania and included responses from 626 adult Philadelphians from May 5-8.

Below is a summary of some key findings from the survey:

• 71% disagree that it's now OK for people to gather in groups outdoors, for example to play basketball or use the playground

• 68% agree that unless you work at an essential job, it is your responsibility to stay home

• 75% agree that staying at home, minimizing social contact with others, and keeping at least six feet apart from others are important steps to take

Some notable insights in Philadelphia's survey include a divide between men and women on the issue of masks. While 85% of women agreed that everyone needs to wear a mask outside the house, only 65% of men agreed with the same statement.

Despite the majority responses in favor of strong public health precautions, just 42% of those who took the survey said they think their neighbors believe strongly in the importance of steps like staying home, minimizing social contact, and keeping six feet away from others.

Among black residents included in the survey, 86% percent said they believe in the importance of the public health measures noted above — which is higher than the city average as a whole.

"With the results of this survey, it is clear that the vast majority of Philadelphians get it. They understand the need to follow guidelines for social distancing—including wearing a mask when leaving the house," Mayor Jim Kenney said. "For the one out of four Philadelphians who still doesn't get it, it's time to get on board with your neighbors in acting to keep everyone safe. If we are to emerge from this shutdown as quickly as possible, we need as many people as possible to do what is right and follow these common-sense precautions."

Philadelphia reported 237 additional confirmed cases of COVID-19 on Wednesday, bringing the city's total to 21,975. Another five fatalities raised the death toll to 1,248, include 662 nursing home residents. Philadelphia hospitals are treating 432 COVID-19 patients, while hospitals across Southeastern Pennsylvania are treating 886 people.

"That 237 number for a single day is not a number I'm quite as happy about," city Health Commissioner Dr. Thomas Farley said. "I'd like to see it lower, but overall the trend is still down."

Philadelphia is preparing to enter the yellow phase of Pennsylvania's COVID-19 reopening plan on June 5, but Farley noted that this still remains dependent on improving numbers. The city is unlikely to hit the state's previous benchmark of about 50 new cases per day before June 5.

"I don't think we're going to get down to 50 cases a day by June 5 even if the numbers continue to look good, even if we start to decrease," Farley said. "I think that would be OK if we're continuing to see some decrease each week now and then. I don't think we need to have everything in place for this first stage of yellow, which is really a very careful restarting of some activities, which are relatively low-risk."

If the city's numbers get worse over the next week, Philadelphia may rethink lifting restrictions at this stage.

"We do need to follow the numbers between now and then," Farley said. "If they get worse, we could reconsider that. It's not a guarantee we'll be ready to go to yellow on June 5. It's just if the numbers continue to look good."