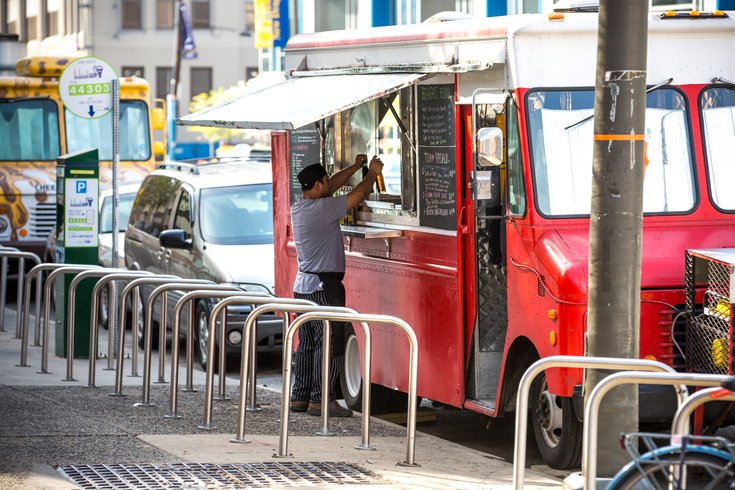 Food trucks in Philadelphia are now permitted to reopen and serve customers as long as they follow guidelines to prevent the spread of COVID-19, officials said. The city is expected to move to the yellow phase of Pennsylvania's reopening plan on June 5, 2020.

Philadelphia has lifted restrictions on food trucks and will allow restaurants to serve customers for walk-up service as the city prepares to enter the yellow phase of Pennsylvania's COVID-19 recovery plan early next month.

The immediate changes reflect the city's ongoing progress in reducing the spread of the virus, though officials remain cautious as they develop yellow phase guidelines for residents and businesses. Those announcements are expected to come later this week.

Dine-in service will remain prohibited at restaurants and all walk-up customers will be required to wear face coverings and practice social distancing. Lines outside restaurants must not exceed 10 customers, officials said.

The city is still exploring whether some form of outdoor dining may be permitted in the near future. Multiple city departments are examining whether such service can be done safely and practically.

"We're looking to see whether we can provide additional curb space, additional sidewalk space or lanes, or closing streets to provide that help," said managing director Brian Abernathy. "We want to make sure we're thoughtful about whatever we do."

Gov. Tom Wolf's announcement last week that the Philadelphia region will enter the yellow phase on June 5 came as a surprise to many who thought the city might be several weeks away from previously established benchmarks.

Health commissioner Dr. Thomas Farley said some of the change in position comes from observing what happens elsewhere.

"We certainly track the epidemiology of this virus, where it's going, what populations it's in, what's happening in other jurisdictions," Farley said. "We try to base our policies on that as much as possible. If other jurisdictions are succeeding in allowing certain activities, for example, and the virus is not showing increased activity, that's a sign that we can probably safely go there ourselves."

Farley added that the city is conscious of the balance between public health metrics and the economy.

"If there's no economic activity, there is a real health consequence to that," Farley said. "Every place is going to be doing the same sort of balancing act, and the key to it is barriers, so that the droplets that have this virus don't spread from one person to another. That involves masks, it involves physical barriers and it involves spacing."

Despite trends moving the right direction, city officials remain concerned about residents gathering in large groups. Mayor Jim Kenney reacted to a Memorial Day incident in which up to a few hundred people were dispersed from the Brewerytown section of the city.

"We have to continue talking and communicating to people that this is their responsibility to keep this going in the yellow-to-green direction, as opposed to staying in the red," Kenney said. "It's difficult with a large group of 200-plus people to make a mass arrest, and that's not something we're interested in doing because of severe strain on our police department to do something like that. We will continue to hope to be able to reason with people."

Hospitalizations also continue to fall throughout the region. Philadelphia hospitals currently are treating 439 COVID-19 patients, while 891 people are being treated in hospitals across Southeastern Pennsylvania.

Farley said the city's upcoming plan for the yellow phase will involve many differences from normal operations for businesses and residents before the crisis.

"It will involve reducing the number of people in any one setting, barriers to block the droplets that might carry the infection from one person to another, spacing of people and masks," Farley said. "Businesses are going to have a number of different restrictions that they're going to have to adopt in order to protect people. The main thing that residents need to do is think about masks. That's the one thing that's clearly under the control of every individual person in Philadelphia."