Could fewer Wingettes and an Eagles Super Bowl win bring Wing Bowl to a close?

Things felt a little different in South Philly, and not just because the football team might win a championship 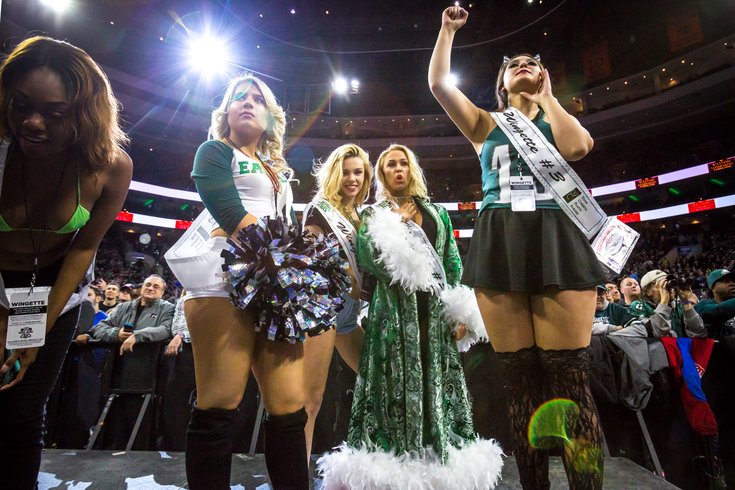 The Wells Fargo Center parking lots were scheduled to open at 4 a.m. Friday.

That's why the line of cars stretched up 11th Street and around Xfinity Live at the stroke of the wee hour.

Somehow, ornery Birds fans had already encamped in the lots between that arena and Lincoln Financial Field.

Eight minutes later, I heard the first raucous E-A-G-L-E-S chant bellow through the rain-filled air. It would be the first of hundreds of such cheers at the annual rekindling of politically incorrect debauchery.

This year, the 26th of its kind, doubled as one of the biggest pep rallies in Philadelphia Eagles history. It was different for that reason, and many more.

The last time Wing and Eagles Super Bowls met, the team lost with a puddle of quarterback vomit at their feet.

This time, the hopes and dreams of a confident fanbase maintained that things would end differently. And who knows, maybe they're right. But before Philadelphia got to that, there was a little matter of chicken eating, beer drinking and skin baring to which to attend. 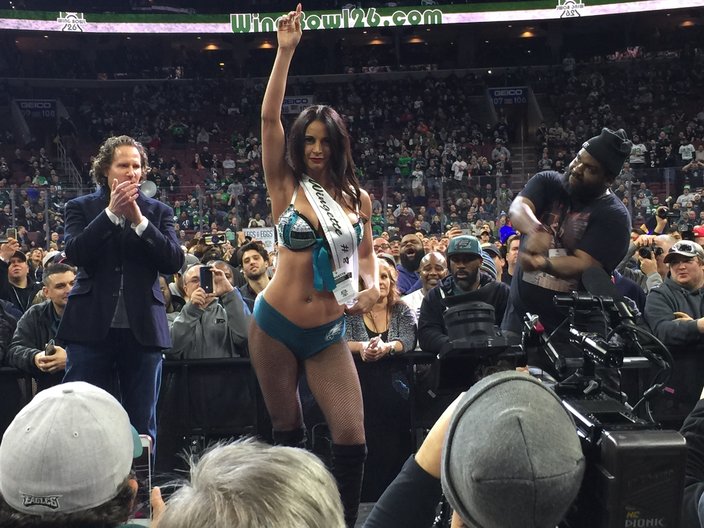 Dawn, 36, of South Jersey was voted one of the top three Wingettes at Friday's Wing Bowl in South Philadelphia, but she did not take home top honors.

As those hungry for the sights and smells of the event waited in the rain outside, a Philadelphia police officer chatted up a trio of event-security staff, two of whom were retired New Jersey police officers.

They commiserated about how this event is the worst from their perspective, courtesy of younger attendees who can't handle their liquor and think it's probably a good idea to start throwing punches.

"I've worked events in Camden," one said, "and this is way worse."

Moe Train takes in the scenery

Inside the arena – as WIP staff and talent geared up for the 5 a.m. broadcast start – eater Moe Train, one of about 30, ambled around. He was marinating in the vibe of the yet-open arena.

He talked about being up since 11:30 p.m. Thursday getting his makeup applied, and arriving at 3:30 a.m. to a scene that was even more than he expected.

This year's edition – the one with an Eagles game yet to come – had a different feel, he said.

"You can feel the energy. It was a party atmosphere outside. In. The. Rain!" he said, noting that he got about 15 minutes of sleep. "I'm not nervous. I'm just hungry."

When you're about to participate in an eating contest, a healthy (well, unhealthy) appetite is key.

"I fasted yesterday. Protein shakes and tomato soup the day before," he shared. "I started seeing lights. My blood sugar was so low that I just ripped open a pack of sugar and ate it.

"I can't wait to see this place when I come out with my entourage. One of the guys spent $200 on a George Washington costume. That's more than I spent! I can't wait till this is over though. I'm gonna have a shot of Jager(meister)."

Then, he was off to get ready for what he came to accomplish.

It would take a little while for the arena to fill up, if it ever fully did. Some chalked that up to the fact that people might've shied away since they took Monday off from work.

Others mentioned that maybe some fans were on their way to Minneapolis to watch Super Bowl LII.

A muted shift in debauchery

When it came to the fewer number of Wingettes on hand to accompany eaters out onto the Wells Fargo Center stage, others – myself included – wondered whether the #MeToo movement had reached a point of impacting women's decisions to participate in a degrading event. (That isn't the easiest of premises to prove, but it's one worth considering.)

In any event, by the time the eaters and Wingettes started making their entrances, the seats were filling up, the noise level rising and the anticipation building.

If the traditional "Boob Cam" was still a thing, it didn't draw the standard screams of approval. (Two women kissing on screen did, but it felt like an aberration).

In lieu of last year's simulated sex scene between Donald Trump and Hillary Clinton imposters, there was a float where a man in a Tom Brady jersey lay on the ground with strategically placed deflated footballs. Next to him was a man dressed like a Philadelphia Police Officer holding a can of Crisco. It didn't need to be said what they were trying to say.

When WIP overnight host Big Daddy Graham emerged for his traditional start-of-show duties, he engaged in a "voodoo ceremony" in which he placed a rubber chicken into a coffin.

After the two scantily clad ladies with whom he entered rubbed their butts on the coffin, a live chicken emerged. 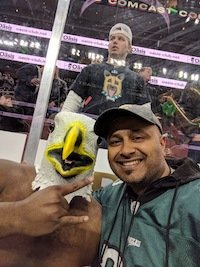 Jigar Desai ran into a pillar on a SEPTA platform. Nyseem Porter sported an Eagles mask on Broad Street. Wing Bowl 26 brought them together.

Yes, dancers at local strip clubs (and others) still accompanied the men onto the floor, placing plates of wings before them as they did in previous years as well, so let's not go overboard with the taming of the Wing Bowl analogies.

Also, there was a goat in The Toothless Barracuda's entourage, and I hope it made it out of the building in decent enough shape.

You've already probably read about the results of the chicken-eating contest, that being Molly Schuyler winning a third title in five attempts, downing an astronomical 501 wings.

And how Ric Flair – who almost died in the year since his last Wing Bowl appearance – emerged from a makeshift Lombardi Trophy float and delivered a pep talk, predicting an Eagles victory on Sunday.

What may have flown under the radar is how first-time competitor Nadia White qualified for the Top Ten second round. She struggled to keep the wings down later in the contest. 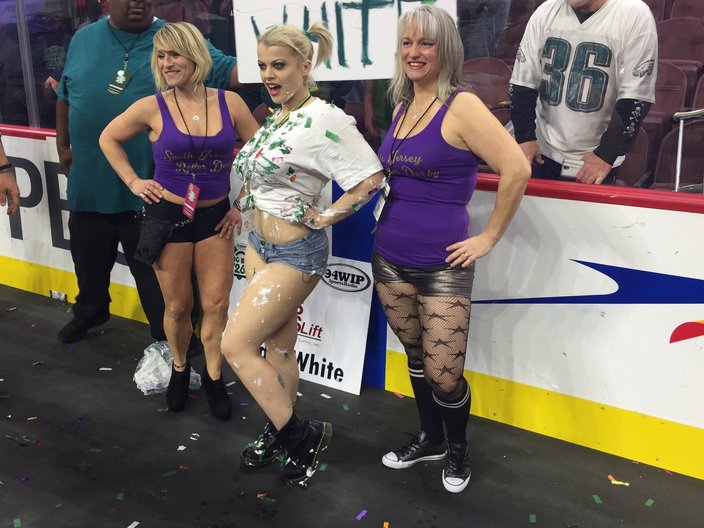 In her first-ever Wing Bowl competition, Nadia White (middle) qualified for the second round by finishing in the top ten.

When I asked her what it felt to fight off vomiting in front of thousands of strangers, she just shrugged.

"I wasn't really thinking about that," said White, whose boyfriend's friend urged her to give the contest a chance. "It was awesome. I'm glad I made the second round. That's what I wanted to do."

Moe Train – he of the walking around the arena before the contest started – would finish in fifth place. He was very happy about this, as was his Washington tribute-artist friend Brian Kracyla.

"Man, I feel like crap," he said as the cameras flocked toward the champion, Schuyler.

Asked if he was still going to have that shot of Jager, he did not hesitate.

What's next for Wing Bowl?

And with that, the Wing Bowl wrapped up its 26th edition. Over the loudspeakers, the next set of hosts took over for an on-air post-eating show. Drunks, lechers and assorted fans made their way out of the building to the point that it was eerily silent inside around 10 a.m.

Only one question lingered in the air, though: Would this event continue should the Eagles win on Sunday? Nobody offered a formal comment about that, other than a station executive telling me "that's an interesting question."

But even moreso - and I'm no white knight here, so don't even - should it continue amid a #MeToo era which beckoned societal shifts away from Wingette-ifying women?

That's not for me to decide.

But I'll tell you what: The stars are lining up to give WIP a perfect opportunity to take an easy out that even its most unrefined fans could stomach.