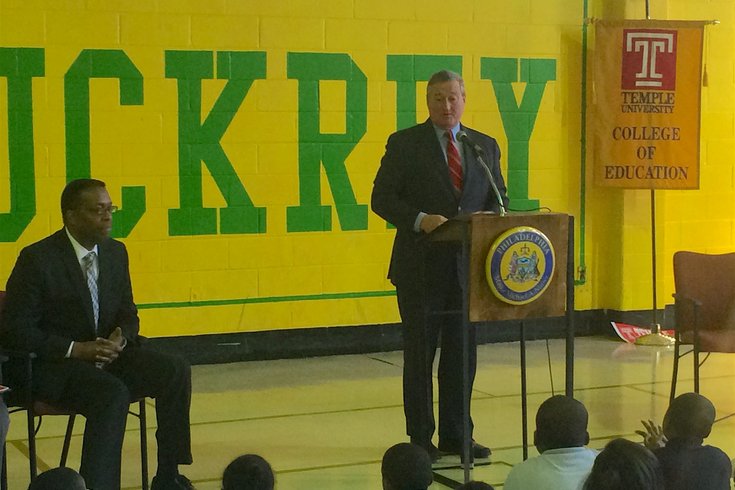 City Council grilled members of the city's office of education on Tuesday, as council members sought answers on plans for community schools and a universal pre-kindergarten program for children throughout the city.

The barrage of questioning came during the latest hearing on the city's budget plan for 2017. Similar hearings are set to be held through May.

While it doesn't always happen, City Council is typically expected to approve the budget at least 30 days before the fiscal year ends on June 30.

In presenting testimony on the city's school system and its plans for the future, Otis Hackney, the city's chief education officer, said that "providing a quality education impacts a child's quality of life."

"This will require an investment from our city," he said.

In his proposed budget, Mayor Jim Kenney plans to make an investment to the tune of $256 million in local and state funding to fund a universal pre-K program over the next five years. For fiscal year 2017, $29.7 million would be spent on these initiatives, with the majority of that – $26 million – earmarked for creation and operation of an entity to govern the planned pre-K program.

"Why do you need to create a new entity to do that?" asked the councilman.

"There's a limit to what they can do," replied Anne Gemmell, the city's pre-K director.

Existing programs, especially those offered by the Philadelphia School District, are "facing serious limitations" due to the state of school facilities, children's ability to access the programs and other issues, she said.

"There are limits on facilities and also capacity," she said.

Gemmell said thousands of children meet criteria to participate in pre-K programs, but are unable to access these programs. During the hearing, the office of education said that only about 15,000 of the city's 32,000 three- and four-year-olds who live in eligible households are able to be accommodated by existing pre-K programs.

That leaves about 17,000 eligible children in the cold.

The budget plan hopes to expand those slots to 25,000 over the next five years.

With such a need for open slots, Clarke asked, then, why is there no financial cap on the pre-K program. As proposed, the pre-K program would be truly universal, allowing families at any income levels to access these slots. An income cap would ensure that families who couldn't afford alternative pre-K programs would be able to utilize the new pre-K slots, he said.

"I don't know why we are subsidizing slots for people that, frankly speaking, could afford to pay for those slots," said Clarke. "Why is there no income threshold?"

Other council members seemed to agree, with Maria Quinones-Sanchez (D-7th) calling a financial cap for the pre-K program a "necessity."

Hackney replied that the hope is for the program to truly be "universal" and open to all Philadelphia families.

He said he was willing to "seriously consider" adding a financial cap to the proposal.

Gemmell said nothing in the plan was "set in stone," and that even the proposal to create an entity to manage the pre-K program could be changed.

Next year, the city expects to set aside $3.5 million to build a community schools program.

The community schools plan would offer a variety of city services to area schools, helping to bolster the services already available at these schools. The additional services could vary greatly from school to school, noted Gobreski.

Which schools would be selected to become community schools – or how that will be determined – isn't yet finalized, she said.

Councilman Curtis Jones Jr. (D-4th) and others stressed the importance of an open and transparent selection process.

"We are very committed to having a transparent process," replied Gobreski.

Tuesday's discussion was seemingly just the beginning of discussions on community schools and the pre-K program, as Clarke noted there will be additional hearings during the ongoing budget process.

Council requested more information about the programs as the process to create them moves forward.