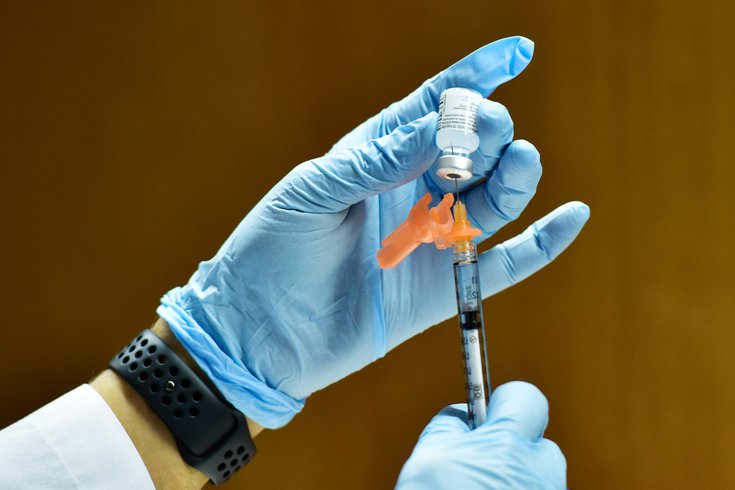 About 100 Philadelphia firefighters have declined the COVID-19 vaccine since the department began inoculations in late December.

The Philadelphia Fire Department started vaccinating its firefighters against the coronavirus in late December, but not everyone has been eager to roll up their sleeves.

About 100 firefighters declined to receive it, 6ABC reported.

Their hesitations mirror those held by other front-line workers eligible to receive one of the newly-authorized COVID-19 vaccines. Some health care workers reportedly have chosen to delay their shots, because they feel uneasy about the potential side effects. Additionally, many people of color have a mistrust that stems from the country's history of racial injustice.

A mid-December poll from the Kaiser Family Foundation found 29% of health care workers were unwilling or reluctant to receive the vaccine, a couple ticks above the 27% of the general population that expressed similar views.

However, the overall willingness to get the vaccine rose eight percentage points from a poll taken in September — before the U.S. Food and Drug Administration deemed the Pfizer and Moderna vaccines safe and highly effective.

Nearly 178,000 Pennsylvania residents — mostly health care workers — have received their first dose of a COVID-19 vaccine, according to the state's vaccine dashboard.

Some health care workers have declined to sign up for a vaccine, Health Secretary Dr. Rachel Levine said this week, though she did not provide specific figures, PennLive reported.

It can be difficult for health systems to determine whether workers are declining vaccines, because they don't directly accept or decline a shot. Rather, they are given opportunities to sign up for vaccine appointments.

Many people of color have a deeply-rooted mistrust of medicine, having been the subject of unethical medical experimentations in the past.

Those racial disparities may be the result of various factors, including access, but they suggest mistrust is prompting some people of color to pass up the vaccine.

"This is a fear and mistrust (that) is built in because of health care systems and governments being systematically racist," Jim Garrow, spokesperson for the city's health department, told 6ABC. "And I think it's important to put it as bluntly as that."

The fire department and city health department are conducting outreach efforts to reduce skepticism. Some firefighters have indicated they may consider get the vaccine at a later time.

"I think folks have a lot of different concerns about the vaccine and we're doing our best to educate them and address those concerns," Fire Commissioner Adam Thiel told 6ABC.

The city's fire department began vaccinating its members at walk-in clinics held last week at its headquarters. As of Wednesday, 100 firefighters and emergency personnel had received their first shot of the vaccine.

Paramedic Steven Carr chose to get his first shot Wednesday after initially being hesitant. He said he wanted to protect himself and his family and was worried about contracting the coronavirus and spreading it to his parents and fiancee.

"Hopefully, it will eventually allow us all to return to a more normal way of life," Carr said in a news release.

Earlier this week, Philadelphia Health Commissioner Dr. Thomas Farley said vaccinations could take a year if they continue at the current pace. The city has been told it will receive 9,500 Moderna vaccines and 9,750 Pfizer vaccines each week through the end of January.

"To be clear, in a city of 1.6 million people, this is not enough," Farley said Tuesday. "At this rate, it'll take more than 12 months to vaccinate the entire population of the city of Philadelphia. We certainly hope that the delivery of vaccines to us increases."

The next phase to receive the vaccine will include front-line, essential workers.

New Jersey firefighters and police officers have been cleared to begin getting inoculated this week, following health care workers and nursing home residents.