About 90,000 deaths can be avoided if 80% of fully vaccinated people get the updated shot, a new analysis finds. But surveys suggest interest is waning 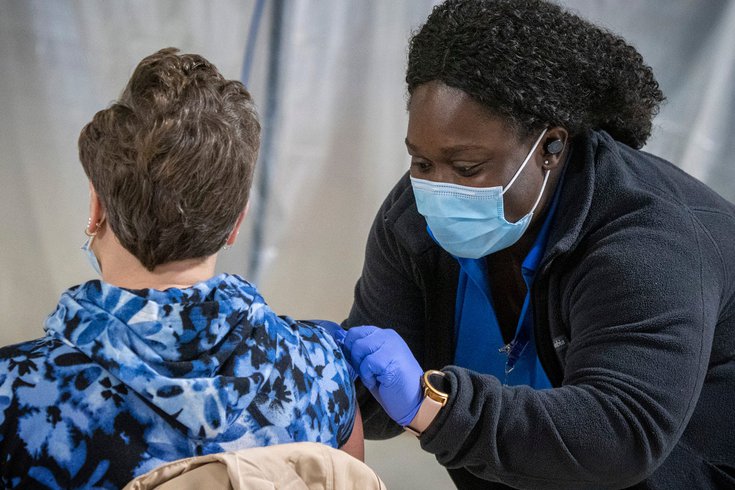 U.S. adults and children 5 years old and older now can receive COVID-19 booster shots that protect against the original form of the coronavirus and two omicron subvariants. Above, Magdalene Asare-Larbi administers a booster shot at a UMass Memorial Health Care clinic in March.

Scientists say a strong COVID-19 booster campaign is necessary to ward off a potential surge of infections this fall and winter, but Americans have been less enthusiastic about getting them.

As of Monday, 68% of the U.S. population has completed a primary vaccine series, but less than half of them also have been boosted, according to researchers at Yale University and the Commonwealth Fund. And only 36% of people age 50 and older have received their second booster doses.

The rates of vaccination, including boosters, dropped below less than 100,000 doses administered daily by Sept. 12, the researchers noted. But they have ticked upward as more people seek updated booster shots.

In early September, the U.S. Food and Drug Administration authorized bivalent boosters from Pifzer and Moderna that protect against the original version of the coronavirus and a pair of omicron subvariants, BA.4 and BA.5.

But interest in booster shots has waned, according to a Pew Research survey released Wednesday. The percentage of U.S. adults who say they are fully vaccinated and have had a booster shot within the last 6 months is down to 38%. In May, it was at 49%. About 23% of people surveyed said they would probably not get an updated booster shot.

This means that a large portion of U.S. adults do not have the highest level of protection against COVID-19, Pew researchers said.

The Yale and Commonwealth Fund researchers argue that an aggressive fall vaccination campaign is needed. But the federal government's decision to pull back funds for vaccinations may make it harder to achieve high rates of updated booster shots.

The consequences could be significant.

The bivalent booster shots are available to anyone age 5 and older who has completed a primary vaccine series and not had a booster in the last two months. In Philadelphia, booster doses are available at city health centers and some pharmacies.