Most American adults have been vaccinated against the coronavirus. But their kids? That's another story 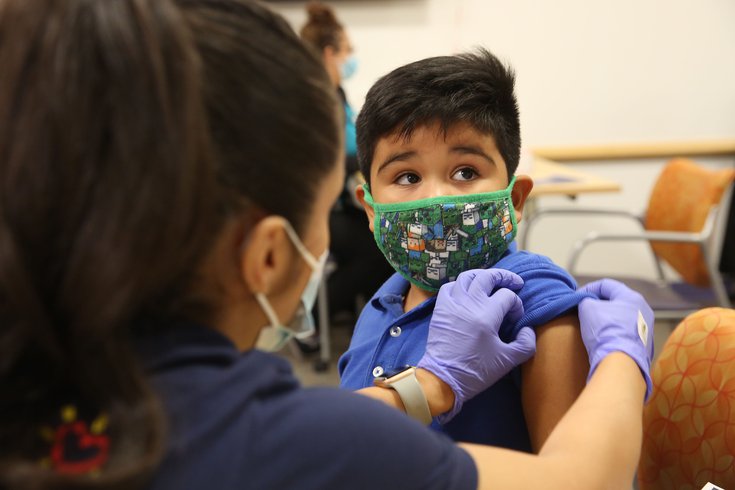 The percentage of U.S. adults who have been vaccinated against COVID-19 far outweighs the percentage of children who have been inoculated. That disparity is driven by misinformation about vaccine safety, new research suggests. Above, Pablo Peralta, 5, received his COVID-19 vaccine at the El Paso Children's Hospital in November.

Nearly all Americans have been eligible to receive COVID-19 vaccines since June, with the vast majority having gained access at least seven months earlier. Yet, large disparities exist between the percentage of adults and children who have been inoculated.

Nearly 78% of U.S. adults had completed the primary COVID-19 vaccine series through Sept. 28, according to the U.S. Centers for Disease Control and Prevention. But only 38% of children ages 5-11, who became eligible in November, had received at least one dose. That equates to 10.8 million children.

And only 8% of children ages 6 months to 4 years have had at least one shot, equating to 1.4 million children.

The lower vaccination rates among children can be attributed to misinformation about the safety of vaccines in general, but particularly the COVID-19 vaccines, according to a study by the Annenberg Public Policy Center of the University of Pennsylvania.

The researchers found many U.S. adults incorrectly believe that vaccines contain toxins, like antifreeze, or that certain inoculations can cause series health issues. For example, in 1998 Dr. Andrew Wakefield suggested that the measles, mumps and rubella vaccine may cause autism – a claim has been proven false but continues to spread widely. There also is no evidence that the flu vaccine increases the risk of getting COVID-19.

"All of the misconceptions we studied focused in one way or another on the safety of vaccination, and that explains why people's misbeliefs about vaccinating kids are so highly related to their concerns about vaccines in general," said Dan Romer, research director of the Annenberg Public Policy Center. "Unfortunately, those concerns weigh even more heavily when adults consider vaccinating children."

Specific concerns about COVID-19 vaccines included false claims that they can cause infertility or change the recipient's DNA. Some people believed the vaccines frequently cause allergic reactions, are riskier than getting COVID-19 and are responsible for thousands of deaths. None of these claims are true.

Public health experts have blamed the disappointing vaccine rates on misinformation about the safety of vaccines and mistrust in public health guidance. They fear vaccine hesitancy will not only make COVID-19 hard to contain, but that it also will lead to a resurgence of other preventable illnesses.

The emphasis on COVID-19 vaccines from governmental leaders has waned since they first became available for adults in December 2020, some public health officials say. Back then, politicians from both political parties stressed the importance of vaccinations by getting their shots on camera.

"The messaging has been insufficient," Dr. Kimberlee Wyche-Etheridge, senior vice president of health equity and diversity initiatives at the Association of State and Territorial Health officials, told the Washington Post last month. "Once the country got into COVID overload, there was a step back in the importance of vaccinations once our youngest children were eligible for the vaccines."

The Annenberg study found that misbeliefs about vaccine safety were a strong predictor of vaccination status. Only 40% of adults who had the strongest beliefs in misinformation had been fully vaccinated by September 2021. But 96% of people with the lowest level of misbelief had been inoculated.

Similarly, people who had high levels of misbelief were less likely to advocate that children get vaccinated. In January, only 55% of respondents said they were "very likely" to recommend vaccinating children ages 5-11. Among parents of a child under age 18, that percentage was even lower – 44%.

The hesitancy to vaccinate children was highest among Black and Hispanic respondents, evangelical Christians, Republicans, women and parents of children under 18.

"It is easy to understand why adults would be particularly concerned about adverse reactions, impacts on the DNA, the potential fertility of children, and the possibility that a vaccine might contain toxins or cause autism," said Kathleen Hall Jamieson, director of the Annenberg Public Policy Center. "Allaying these unwarranted concerns should be a public health priority."

Similar rates of vaccine hesitancy have been reported in other surveys. Last fall, the Kaiser Family Foundation found that one of the major concerns among parents with children ages 5-11 was the COVIOD-19 vaccines' lack of a track record.

The American Academy of Pediatrics recommends all children ages 6 months and older get vaccinated against COVID-19 unless they have medical condition that prevents it use. Parents who are hesitant about getting their children vaccinated are encouraged to discuss the benefits and risks with a trusted health care provider.