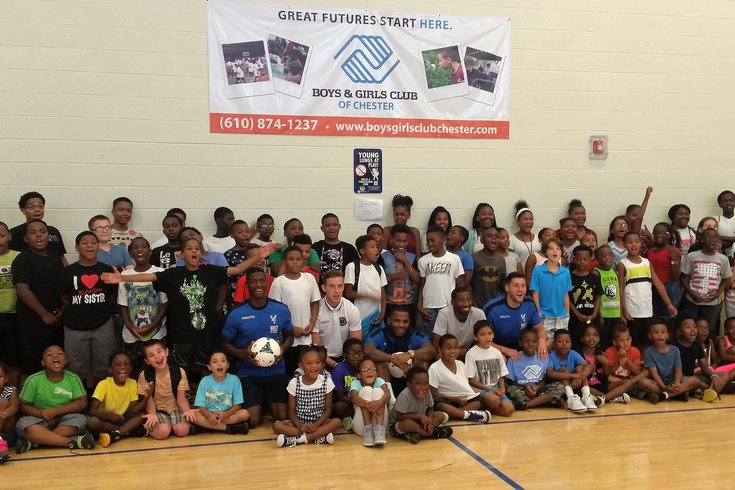 Crystal Palace players Sullay Kaikai, Jason Puncheon, and Joel Ward stopped by the Boys and Girls Club of Chester ahead of their exhibition game against the Philadelphia Union.

Two of the players that featured for Crystal Palace in the 2016 FA Cup final will play against the Philadelphia Union on Wednesday night.

Winger Jason Puncheon came off the bench to open the scoring for Palace in the 78th minute. Right back Joel Ward played 120 minutes in the 2 to 1, extra time loss.

After Tuesday's training session at Talen Energy Stadium, the pair stopped by the Boys and Girls club of Chester to spend some time with local youth, answering questions and sharing their experience as professional soccer players before joining the kids in a kick-around with miniature goals.

They stopped to speak with PhillyVoice and the Delco Times after the event.

How is Philadelphia treating you so far?

Jason Puncheon: It’s been good. It’s been nice so far. Obviously, it’s good to play against Philadelphia again and we’ve got a bit more of the trip to go.

Joel Ward: Really good. Obviously, we’ve only been here a couple days so far, but training has been good. We're adjusting to the heat, which is obviously a big thing. But everyone’s been really welcoming and we’ve enjoyed training so far.

You were here two years ago for preseason. What's changed since the last time you came over?

Puncheon: Last time we trained on the stadium pitch. I think, for us, I think we’ve been in the Premier League a lot longer than the first time we came. It was our first season (in the top flight), and you can see the difference now in the way people react when they see us, to what it was then. So there’s a change for sure.

Ward: I think there’s been much improvement. Last time, we were only here for a few days again, but I think we trained on the stadium pitch last time, but it was nice to be able to go out and train on the training ground. They’re in really good condition, which is good, and it’s a great setup now.

Thoughts on the preseason? Where are you right now and what do you need to accomplish over here?

Puncheon: I think a lot of preseasons when you’re an experienced pro is sort of a team bonding and obviously to improve the team, improve yourself and give yourself a chance from the start of the season. And I think that’s done well for us. I think we’re in quite good shape for the first week for our preseason, and obviously, we’ll know a bit more about that when we play Wednesday.

Ward: Obviously, (the Union) are in their season now and midway through, so they’re kind of firing on all cylinders, and we’re only back into it, we’ve only been back a week, and we’re trying to get fit. We use this as a great platform for us coming up against guys who are very athletic, very quick, very fit as well, so it’s a huge challenge for us and technically we’ve got to be on it because we see the improvement over the last few years has been massive in the States.

Do you enjoy coming to America on these preseason trips?

Puncheon: I enjoy it. You’ve got good weather. You’ve got nice people. You play at a good standard, so it’s good. I enjoy it personally.

Do you like American sports and culture? Do you pay attention to what's going on over here?

Puncheon: The thing with (American sports) is that I pay attention when I’m here. Coming over here, you go home, you pay attention a little, but it’s obviously hard to keep up because we're ahead in time. So when they play, it’s quite late at night and you’ll be normally going to bed at that time.

Do you try to watch an NFL game or MLS if it's on?

Puncheon: If I was to watch anything, it would probably be NBA. I like NFL, don’t get me wrong, but it’s a bit long-winded for me. It takes a bit long. I prefer the basketball side of it.

Who's your basketball team?

Puncheon: I'd probably say, well I used to go to Miami a lot, so I followed LeBron James and Dwyane Wade.. and who's the guy that played for the Spurs?

Puncheon: No, the other guy.

Puncheon: Yea, I followed him obviously. So yea, I like NBA. Credit to LeBron for what he’s done. He’s a great player and obviously going to Cleveland and winning there (was an accomplishment).

How about Kevin Durant leaving the Thunder?

Puncheon: I'm not even that up to date (laughs). You guys know it obviously, I just watch and see it when I see it. 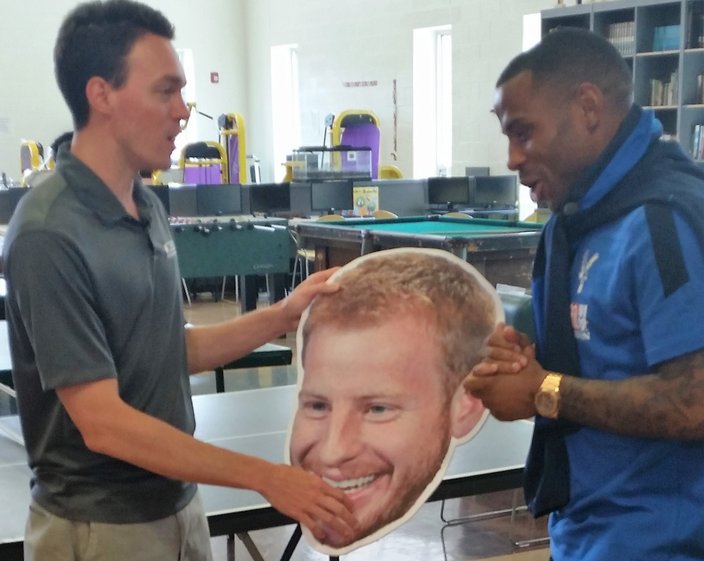 CBS 3's Pat Gallen asked Jason Puncheon if he could identify a cutout of Eagles quarterback Carson Wentz. Puncheon did not recognize Wentz, but noted that he looked like the United Kingdom's Prince Harry.

Frank Lampard is playing in MLS at age 38. Steven Gerrard is 36. Sometimes we get this stigma that MLS is a "retirement league" for aging players who want to collect one final paycheck. Do you hear that in England and do you agree with that idea?

Puncheon: No. I just think, naturally, it’s not a bad thing. I think you’ve got to look at the Premiere League and how long it’s been going on and how ahead of time it is. No disrespect to the football out here, but it’s still got some time to grow. And I think more and more as you see it grow, more and more you’ll see players coming here in their prime. That’s a good thing for here, and I think they’ve done the right thing growing it in the right space of time instead of trying to grow it too quick and long may it continue. In four, five, six, seven years’ time, you will see players playing here in their prime.

Ward: I don’t think so. I think people probably underestimate the physicality of the league and the speed at which it’s played at and the athleticism of the league as well. I think those players like Steven Gerrard and Frank Lampard and those guys there, they’re at the top of their game and they’ve been at the top of the game all their lives. So they’re able to mix it no matter how old they are, no matter what circumstances because they’ve got that quality on the pitch. I think that’s what the States is trying to bring in. The league is trying to bring in the quality of global superstars around the world. It attracts a lot of media, it attracts all kinds of endorsements and it makes the league what it is, and hopefully it will continue to build and continue to increase.

Could you see yourself playing in the United States sometime?

Puncheon: Yeah, I would. I think it’s nice. It’s probably easy for me having a family to adapt to the language, the heat, the weather if I can find a good part in it.

Ward: You never say never. Obviously at the moment at this point in my career, I am where I am and playing in what is deemed the best league in the world. And I’m very blessed to be doing that. But you can never say never. It would be an experience and something I would never rule out.