Dear haters: Diss them all you want, but I love my Transitions® lenses 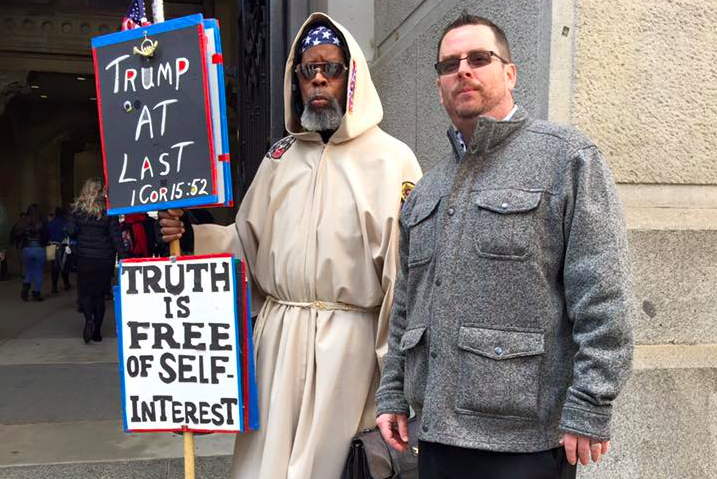 One person is wearing Transitions Adaptive Lenses in this photograph, and it sure isn't the one holding pro-Donald Trump signs.

It’s a rainy, dreary day, and I’m sitting around waiting for a couple people to get back to me on a pair of stories I’ll write later this week. That means is it’s the perfect time for me to offer up a little pushback against the haters.

The topic which I'm about to address is something that’s been bothering me for years now. Specifically, I’m done sitting idly by while people defame my choice in eyewear.

Before we go any further, here is a description of the lenses from their manufacturer:

Transitions® lenses are equipped with patented, photochromic dyes that enable the lenses to rapidly activate, or darken, when they are exposed to the sun’s ultraviolet light.

The greater the intensity of UV rays, the darker the lenses become. When UV light is no longer present, including indoors or at night, the lenses fade back to their original state.

When a wise and considerate ophthalmologist told me, years ago, that instead of purchasing two pair of glasses – one of the sun variety – I could just get one pair that served dual purposes for an extra 60 bucks or so, I was instantly sold.

Essentially, window-tinting for one's eyes, they have proven to be a godsend.

Instead of squinting or fumbling for a second pair of specs, the work is done for me without a lick of personal effort. This is beyond helpful when you ply your trade in a business dependent upon your observational skills.

Well, the haters don’t understand that by a long shot, and they’re more than willing to broadcast it far and wide. To wit:

Transition lenses are a great way to transition into looking like a sex offender.

Why do they call them Transition lenses when you've already reached peak creepiness by putting them on?

Am I the only person who doesn't trust people wearing transition lenses? Like actually gets nervous around them? Just me? Ok... pic.twitter.com/yPYI0600wi

i just swiped left on tinder because he had transition lenses, where do these people come from??????!

Never ever have i ever trusted anyone with transition lenses

Is "guy who wears transition lenses" a future serial killer or going to be a great dad?

Just say no to transition lenses

I am here to say that all of the above haters are wrong, as are the ones whose use of profanity rendered me unable to embed their tweets herein.

Though it's sometimes problematic walking from outside into a darker home, the minor delay is a small price to pay for me and my fellow Transition Lensers.

And, Transition Lenses make life easier for those who choose to wear them.

I am proud to be part of that demographic, and I always will be. In fact, I'm calling upon the Transition Lensers of the world to join with me in declaring that we aren't creepy sorcerers unworthy of love and trust.

We are human beings who just happen to recognize that convenience and vision comfort are worth dealing with folks who just don't understand high-end eye-fashion when they see it.

All of which is to say – deal with it, haters.