Rachel Zeldin was unprepared for what came next.

When her great-uncle died in 2011 without an immediate family to address his funeral needs, Zeldin was stunned that she and her family had been left to both foot the bill and shop for caskets. But what struck her most about the occasion? That she was surprised at all.

"Everyone in my family was like, 'He'll be fine!' And afterwards I stepped back and looked at the situation and thought, 'Well duh, how did I not pick up on that?'" Zeldin told PhillyVoice. "It taught me a lesson to not sugarcoat death and instead ask, 'Should I be prepared? What's actually happening?'"

Born from this realization was Zeldin's do-it-yourself funeral planning service I'm Sorry to Hear, as well as a local version of a concept "cafe" that's taken Europe and parts of the U.S. by storm: the death cafe.

"I’d heard of these cafes that encourage people to come and have coffee and cake and talk about life and death, and I thought it was the greatest atmosphere to disarm people and give people a place to talk about it," she said. "Because talking about it in your family, you can feel trapped."

The first death cafe -- which is not a literal cafe, but a meeting of minds -- was hosted in an East London home by Jon Underwood in 2011, inspired by the work of Swiss sociologist Bernard Crettaz. Since then, 2,195 death cafes have registered as part of the not-for-profit social franchise, at least three of which are in the Philadelphia region.

Zeldin, intrigued by the concept when she first discovered it, first went to a meeting in Manhattan to better understand how the cafe actually functioned and then used that knowledge to bring her own salon-like gathering to Philadelphia in September 2013. Not long after, the region's first death cafe sprung up that July in a Glenside library. Zeldin's inaugural cafe, meanwhile, was held inside a Saxbys in University City and attracted about 45 people. 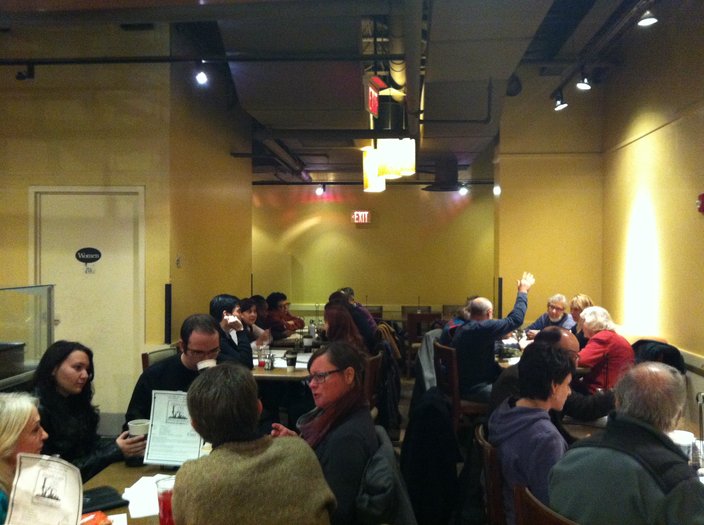 "Philosophy majors, retirees, doctors -- it was really cool to see these personalities and backgrounds come together," she said. "And they were all doing what the goal is: Talking about death and being prepared in advance rather than waiting until the last minute and not getting what we want out of our goodbye.”

Here are the basics of how a death cafe operates: Facilitators -- like Zeldin -- host a group of people in a cafe or living room with snacks and coffee, break up into small discussion groups of four or five and proceed to talk about the birds and bees of death. There's no set agenda, no money to be made, just an honest and open line of dialogue about everything from end-of-life care, to personal experiences with death and, of course, what happens after we die.

For Pat Bubb, who lives in Fairmount and has been to about 14 Philadelphia death cafe meetups in the past three years, she goes for sheer comfort and fulfillment of curiosities. The allure of the gatherings, she said, is that she's able to tackle subject matter she might otherwise feel uncomfortable delving into in casual settings.

"Growing up, I was the youngest of six, so most of my family was older, and it seemed as I grew up, many people would die and we’d go to funerals, and yet we were an Irish family and we didn’t talk about it. But I always had questions," she told PhillyVoice. "This has given me an opportunity to explore my curiosity. And more than anything, I think it's shown me that other people have the same questions I have."

Though many do find comfort in the welcoming nature of the group, Zeldin is quick to clarify that the meetup does not function as a support group.

"We stress in our meetup directive that we're not providing grief support," she said. "This is about self-exploration."

And, frankly, a loftier goal of taking the morbidity out of death.

"This is about bringing death out of the closet," Samantha Shutter, who spun off from the Philadelphia meetup with her own Delco Death Cafe, told PhillyVoice. "One of our tag lines is that you won’t die by talking about death. And people knowing what their wishes are is incredibly important right now -- you don’t want to leave people hooked up and prolong physical life when there’s no hope for quality of life, but people are afraid to talk about what happens at that point."

Conn: "We do not have a deep-rooted culture that accepts death as a natural part of the lifecycle."

Marie Conn, a thanatologist and longtime professor at Chestnut Hill College who teaches the course "The Meaning of Death and Dying," told PhillyVoice that a lot of the stigma surrounding "the talk" about death in the United States has to do with how our culture approaches life.

"Our society is so fascinated by or obsessed with the whole ‘celebrity, fame, power, money’ thing, and there’s an adoration of 'young, beautiful, wealthy, rich,' and to acknowledge that we do grow old, change and die, just flies in the face of all that," Conn said. "In other cultures ... they have a heritage of being much closer to the reality of the cycles of life."

It might also be a result of our history, she added.

"When the settlers came, they did their best to wipe out all the people who already lived here -- people who were so close to cycles of life and death that we could have learned so much from them, but we didn’t allow them to share their experience," she said. "We do not have a deep-rooted culture that accepts death as a natural part of the lifecycle."

Fortunately, she said, people are talking about death more than she's ever witnessed. For starters, her 25-person class immediately fills up every semester -- to the point where the college has started to offer it in the summer. But also, she said, public debates about physician-assisted suicide and so-called "death panels" have helped to bring death to the forefront of the public narrative.

For now, Zeldin, who hosts her death cafe on the last Wednesday of every month at P.S. & Co., just hopes to increase meetup attendance and inspire more people to start their own death cafe.

“I love death café, and I wish everyone would attend at least one in their life and get over their fear of talking about death," she said. "And I think for as long as we have new people coming through and provoking interest, then we’re doing a good job. We're bringing death out of the shadows."