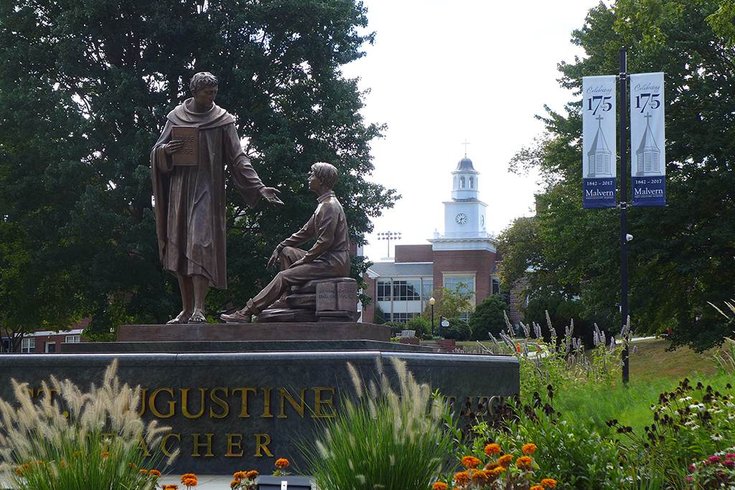 A swimming coach is the fourth – and last – individual defendant in a civil lawsuit who has left or will leave Malvern Prep in the wake of a counselor's inappropriate relationship with a student.

Pete Lee, the former head coach of the Malvern Swimming Association (MSA), which operated on campus, was no longer employed by MSA or Malvern Prep, as of Aug. 3, according to Neha Morrison, director of human resources at the Chester County school.

Lee's departure means three of the individuals named in the lawsuit filed by star swimmer William Beard are no longer associated with the school. The fourth will leave after the current school year.

The lawsuit, which Beard filed on the day after his graduation, accuses the school and the privately-run MSA of failing to intervene when Emily Feeney, a guidance counselor and swimming coach, sexually harassed him  – as a minor – over a 15-month period.

Feeney, 41, was fired in May 2015 and arrested in August 2015 after exchanging 9,000 e-mails and text messages with Beard between March 2014 and May 2015, allegedly culminating in a kiss on Dec. 7, 2014. Feeney promised Beard a swimming scholarship at her alma mater, Harvard University. In March of this year, she admitted trying to seduce Beard and is serving five years of probation. She also had to register as a sex offender.

The school denied the allegations in court documents and Morrison said Lee’s employment status is unrelated to the civil suit. Morrison declined to comment further on why Lee was no longer employed by the school, saying it was school policy not to discuss personnel matters.

Lee, a Delaware County native, served as a coach at MSA since 2002, according to his biography on the swimming association's website, which has since been removed. He was also coach of Malvern Prep's middle school water polo team.

Sources close to MSA, who spoke on the condition of anonymity as they were not authorized to speak on the matter, said Lee's departure was a result of showing up late for practices. Voter did not respond to a request for comment about that claim.

Former assistant coach Bruce Bronson is now the MSA director and head coach, according to the organization's website. Bronson is in his sixth year at MSA, but his extensive coaching career is highlighted by 18 years as head swim coach at Drexel University.

The defendants in the civil suit include, from top to bottom: Emily Feeney, Christian Talbot and Steven Valyo.

On Jan. 28, 2016, nearly six weeks before Feeney pleaded guilty to charges of corruption of minors and indecent assault without consent, Valyo announced to the Malvern Prep community that he would retire after the school year.

“Recently we learned that our nanny, who has worked for us for seven years, became pregnant and will soon be starting her own family,” Talbot said. “We’re thrilled for her, but it also means that we no longer have the only other person, besides [my wife] Lisa and me, who have ever taken care of Julia, and Julia does have significant needs.”

Talbot said his family would be moving to the New York-New Jersey area where their friends and family live so that they will have more of a support network.

According to the suit filed in Chester County, Lee allegedly told Beard in early July 2014 that Feeney told him that Beard wanted to kiss her. Beard claimed he denied that assertion and informed Lee that he did not like Feeney and told him that she acted “weird” with him.

The lawsuit claims that directly following that conversation, Feeney sent an email to Beard on July 9, 2014 saying, “Now that [Pete’s] involved I cannot let that go. Really? I try to help you and you talk smack to other people about me?”

According to court documents, Beard’s father called Valyo on Jan. 5, 2015 to inform him of the improper relationship between Feeney and his son. Beard’s father claims he told Valyo that Feeney was “nuts” and “constantly texting and emailing” his son.

At that time, Beard’s father asked that his son be given a new counselor, court papers indicated.

The suit alleges that, the next day, Valyo sent an email to Feeney referring to the complaint by Beard's father as “one negative experience,” then adding that he “believe[d] in [her] and trust[ed] [her].”

According to the suit, Talbot called Beard out of class to interview him after Malvern Prep and law enforcement officials received a Childline report on May 13, 2015. Childline is a state hotline to report child abuse and neglect. Professionals who come into contact with children are required to report when they have "reasonable cause to suspect that a child under the care, supervision, guidance or training of that person or of their agency, institution or organization is an abused child." Reports can be made anonymously.

When the Childline report on an "unnamed student" was received by the school, the suit alleges, “there were approx. 645 students at Malvern Prep at the time, nevertheless [Beard] was a student that the school quickly identified as the victim, evidencing Malvern Prep’s knowledge that there was an on-going inappropriate relationship between Feeney and [Beard]."

The suit also claims Talbot allegedly told Beard that “I’m sitting in for your parents and I’m your legal representation.” Only after the two-hour interview were Beard's parents made aware of the Childline report and questioning, the suit claims.

Malvern Prep has denied the allegations in its court filings.

Talbot said he and Valyo began conversing about the possibility of leaving in January and February of this year, prior to March 7, 2016, when Feeney admitted fault. At that time, Talbot denied there were any settlement discussions between the school and Feeney, according to the school newspaper, The Friar’s Lantern.

Beard filed the civil suit on June 2, the day after he graduated from Malvern Prep, where he was an All America swimmer. He is continuing his education and swimming career at Penn State University on a full scholarship.

The lawsuit, which requests a jury trial, seeks a total judgment in excess of $250,000, plus interest, cost and punitive damages, specifically:

• $50,000 from Feeney for intentional infliction of emotional distress

• $50,000 from Malvern Prep, Talbot, Valyo and Lee for negligent supervision

• $50,000 from Malvern Prep for negligent retention

• $50,000 from the Malvern Swimming Association for negligent supervision

A trial date has yet to be set.