A school bus occupied by students was struck by bullets during the pursuit; the suspect also carjacked two motorists, state police say 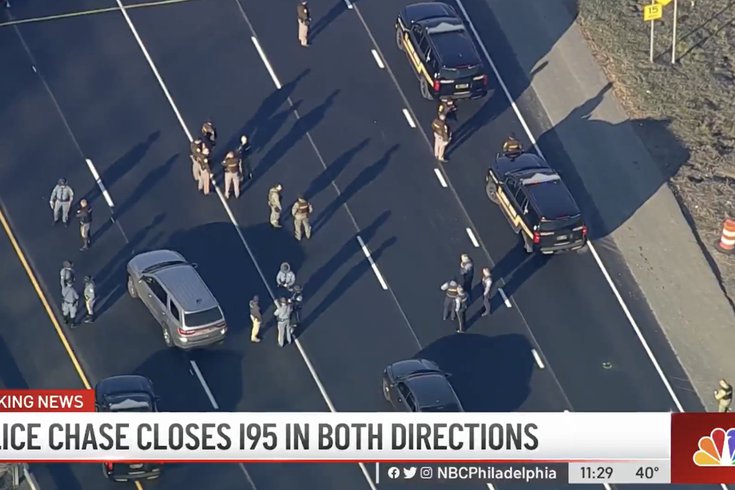 Police in Delaware shut down a stretch of I-95 due to the pursuit of an armed suspect that began Friday morning. The suspect, who exchanged gunfire with police, died in the area of I-95 South near Delaware Route 896 in Newark.

The suspect who led police in Delaware on a lengthy chase on Friday, carjacking two vehicles along the way has been confirmed to be dead by Delaware State Police.

The chase and investigation began Friday morning in Newport, New Castle County, which is about 6 miles south on I-95 from Wilmington. The pursuit resulted in the closure of a stretch of I-95 before it ultimately came to an end in Newark, and during the incident gunfire struck an occupied school bus.

At around 7:30 a.m., troopers responded to a report of a male with a gun on the 100 block of Ayre Street in Newport, authorities said. When police arrived, the suspect fled on foot and gunshots were fired, Senior Cpl. Jason Hatchell said during a press briefing on Friday afternoon.

This is the full statement from police, taken by our @BrennaWeickTV.

Three bullets struck a New Castle County Vocational Technical School District bus traveling in the area, but no one was injured, the school district said on Facebook. The bus had been occupied by students and the driver at the time. After the bus was struck, the bus driver pulled off to the side of the road and notified her supervisor before taking the students to Delcastle Technical High School. Investigators do not know yet whether the bullets that hit the bus were fired by the suspect or by police.

After the exchange of shots, the suspect fled on foot to the area of Route 141 and Route 4, where he carjacked a driver and sped away.

For a time, the police chase continued in Newark, ending up in a cul-de-sac near Old Cooch's Bridge Road, behind the Red Roof Inn & Suites on Route 896, Hatchell said. There the suspect got out of the stolen vehicle and ran towards the I-95 South and Route 896 interchange, carjacking a second person while firing more shots along the way.

It was around this area that the chase ended.

"Upon contact with police, the suspect was pronounced deceased from injuries sustained," Hatchell said. State police tweeted at 11:15 a.m. that there was no longer a threat to public safety.

Police have not yet said if troopers shot and killed the suspect, whose identity has not been released.

Numerous roadways in Delaware were closed for hours during the chase and investigation, including a stretch of I-95 in both directions in the area of Route 896, which is the main road leading to and from the University of Delaware. The southbound lanes of I-95 remained closed near Delaware Route 273 until about 5 p.m., state police said.

Residual traffic delays should be expected on I-95 in Delaware.

Real time updates will be provided by the Delaware Department of Transportation. Delaware State Police are providing updates on Twitter

Updates going forward will be under this feed #95Chase

"The incident is contained at this time, there is no threat to public safety, and police are advising the public to please avoid the area," Delaware State Police said Friday afternoon.