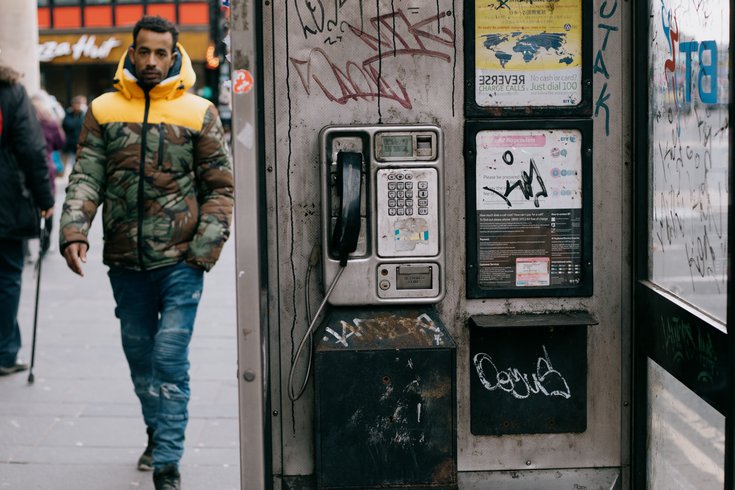 PhilTel is a new project in Philadelphia aims to create a network of free 'pay phones' that are run using VoIP. The prototype will debut at Iffy Books in December, but founder and software engineer Mike Dank hopes to grow the collective to other locations and unused outdoor pay phone stands.

No piece of public infrastructure appears more forlorn and obsolete than a pay phone. When's the last time you used one? 1999? Did your mom hang up on you for calling with 1-800-Collect, just to let her know you're not dead and that you'll be late for dinner?

In cities across the United States, working pay phones are disappearing at a rapid rate. From a peak of about 2.6 million in the mid-1990s, that number had fallen to about 100,000 by 2018, according to the FCC. In an age when roughly 97% of Americans own cellphones, there isn't much utility or appeal in plunking a couple of quarters into a grimy machine and picking up an ancient-looking receiver to make a call.

But there is more than a little bit of throwback romanticism in the history of the pay phone, which is a common plot device for anonymity in movies and TV shows. Much like the enthusiasm behind vinyl records and retro video game consoles, nostalgia always finds a way to recapture the art and function of dated technology.

"There's a whole pay phone subculture across the country, and there are a lot of payphone aficionados on the East Coast," said Mike Dank, a Philadelphia-based software engineer whose passion project, PhilTel, seeks to revive a network of free-to-use pay phones that will rely on modern technology.

And yes, the concept is an oxymoron, but you get the idea.

"If you want to get into the nomenclature of it, we've had tons of discussions about whether it's a 'free' pay phone," Dank said. "Is it a 'pay-less phone?' It is it a 'pay fauxne?'

On Dec. 17, PhilTel will install its prototype at Iffy Books, a small shop just north of the Vine Street Expressway at 319 N. 11th St. The free phone will operate using Voice Over Internet Protocol (VoIP).

"We run open source software on a Linux-based server up in the cloud, which basically acts as a phone exchange," Dank said. "You could think of it as a baby phone company, where you have different lines that can just go to a computer, so that all of those lines can talk to one another."

That's not exactly what comes to mind when talking about pay phones, but the partnership with the bookshop is a first step for PhilTel to see how the idea works.

"You could call it our flagship phone or proof-of-concept trial run," Dank said. "We put it out there. We see how people use it. We're in ideal conditions. It's indoors. We have electricity supplied by the building. It's the best case scenario. For future pay phones, the idea is we would either work with businesses who are okay with us installing them, or work with maker spaces, community centers and bars."

Dank's dream scenario is to build a network of dozens of phones, some inside and some outside, that will offer accessible phone service to vulnerable populations and also provide a fun experiment to those who appreciate a lost form of communication.

Free-standing, outdoor pay phones that actually work have become so rare in Philadelphia that people who find them sometimes share the news with excitement. In May, one Reddit user was ecstatic to have found a working pay phone across from Pat's King of Steaks in South Philly.

"Within Philadelphia, I think there are probably about 50 working pay phones as of right now," Dank said. "That number is shrinking. It was probably a lot higher at the beginning of this year, closer to 100."

As recently as 2015, BillyPenn had reported that there were still more than 1,000 working pay phones in Philadelphia. A community-maintained map of pay phones in the U.S. shows just how few remain in the city, and even the map can quickly fall out of date.

In Philadelphia, there are two primary pay phone service providers — Pacific Telemangement Services and NewTel. The latter has lately been encountering technical issues that have compelled the company to shut down service on some of the last working pay phones in the city, Dank said.

If PhilTel can build momentum and obtain funding to expand, Dank hopes to bring free, VoIP phones to some of the non-working pay phone pedestals that still dot the urban landscape.

"Essentially, we like pay phones because we think they're cool. We think they're relics of this bygone era that are slowly disappearing," Dank said. "In a city like Philadelphia, which is so history-centric, where a lot of stuff is being preserved, we have all sorts of infrastructure that's going away. You could make the argument that that's for the better or for the worse."

Though Dank acknowledges his amateur, self-funded project faces steep hurdles to becoming widespread in Philadelphia, he points to other promising models that have emerged in other cities.

In Portland, a project called Futel has repurposed defunct pay phones as part of a social mission.

"Denial of telephony services has long been a tactic used against undesirable populations, and our devices will counteract that," Futel's website says. "But more importantly, we will help to establish a new era of communication, one in which reaching out is not only desirable, but mandatory."

The project in Portland has generated mixed reactions, including complaints that Futel has had to address about people using the phones to arrange drug deals, or other uses of the phones that fall under the "tragedy of the commons" umbrella.

"There are many illegal and many immoral activities which we would not like our phones to be used for," Futel's organizers wrote in a Tumblr post in September. "It is also clear that the positive uses greatly outweigh the negative uses."

Making anything free to the public comes with a set of considerations about how the resource might be used and abused.

Dank said he's spoken with the people behind Futel for guidance on getting PhilTel up and running. He's also communicated with a New York City-based project called Talk To Me, a network of five public pay phones in each of the city's five boroughs. The phones can only connect to one another. Every time someone picks up a phone, the others ring.

"It's like you enter the Matrix into finding some stranger in New York City who just happens to be walking by to talk to," Dank said.

New York ceremoniously removed its last free-standing, public pay phones in Times Square in May. The FCC's 2018 report of about 100,000 remaining pay phones in the U.S. had estimated about one-fifth of them were in New York City. As the industry has whittled away, there isn't much reliable data anymore.

END OF AN ERA.

No more fishing in your pocket for quarters.pic.twitter.com/ZtRhzWPp4G

What Dank finds most encouraging about Talk To Me is that the grant-funded project went directly through an existing pay phone provider to arrange for the use of non-working booths, which were retrofitted with technology similar to PhilTel's. Talk To Me is even working on a solar-powered solution to keep the electronics running.

Dank has not yet reached out to the pay phone providers in Philadelphia about making inroads to use their infrastructure. As outdated as pay phones have become to most people, it's still a niche business model that generated $286 million in revenue as recently as 2015, according to the Federal Communications Commission.

"We still don't know what they would think of this project, considering we could be seen as something of a novelty or a competitor," Dank said. "There's a lot of outstanding questions for how the best way to handle that would be. We are considering what we can do to try to revitalize old phones and go through the proper channels to do that."

The phone that will debut at Iffy Books was an old model that Dank picked up years ago at a flea market. Decommissioned pay phones frequently find their way onto websites like eBay and Facebook Marketplace, where they are surprisingly pricey. A used pay phone typically goes for around $300, while new models can sell for anywhere from $600 to $1,000.

Most "dead" pay phones in Philadelphia are difficult to repurpose for a project like PhilTel because it's difficult to obtain the keys that would allow someone to toy around with the hardware. But once a used pay phone has been purchased, it's not that hard for someone with know-how to set up a working VoIP rig.

"You're presented with a backing board where you can pretty securely mount a pay phone," Dank said.

In the immediate future, the greatest barrier to PhilTel's growth is obtaining funding — whether it's through grants, crowdfunded donations or sponsorships.

"There are expenses for getting pay phones and doing installations, and maintaining cost to use our providers and run our servers," Dank said. "The pie in the sky idea is as many phones as possible. We want to see how the first one goes and we would like to expand to more than that. The issue is going to be finding places that are willing to host a pay phone."

Dank does not foresee pursuing PhilTel as a business idea. He wants it to remain a free network, no matter how small or big it becomes. He welcomes hackers, artists and engineers — especially those with backgrounds in sound and telephony — to reach out through the project's website if they want to contribute their knowledge or get involved. Locations interested in hosting a PhilTel phone also are encouraged to connect.

"You could think of this as half art project, half community service project, in a sense," Dank said. "We like tinkering with these phones. We like the idea of providing interesting experiences and having people play with them. At the same time, there are people out there who can benefit from having free phones available."