Thousands of users have posted their sometimes embarrassing, frighteningly accurate Instafest concert bills to social media; here's how to find yours 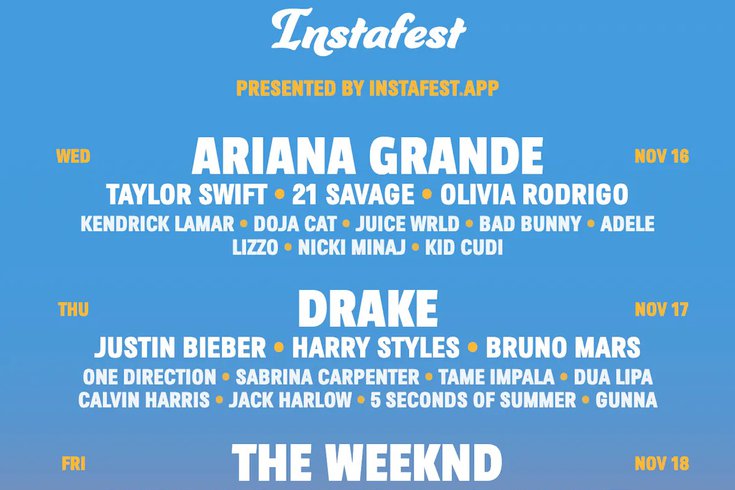 Instafest, an app that takes users' Spotify listening history and creates a personalized music festival lineup, has taken the internet by storm.

If you spent any time on social media this holiday weekend, chances are you saw at least a few colorful graphics from friends and celebrities of what looks like a new music festival lineup.

Instafest — an app that takes users' Spotify listening history and transforms it into a personalized concert bill — has gone viral on social media after University of Southern California student Anshay Saboo coded the website earlier this year. Not to be confused with a similar trend involving edited Coachella Music & Arts Festival lineups that have circulated over the last few years, Instafest uses Spotify's listening data to create a three-day concert featuring your most frequently played artists.

It's easy to use: just log onto the website with your Spotify account, and watch as the algorithm creates a weekend festival lineup before your eyes. You can customize the lineup to include your top artists over the last four weeks, six months or from when you first opened your Spotify account. You can also change the background of the poster and create a unique name for your festival — otherwise, it will default to a shortened version of your username.

The internet is just days away from the end-of-year release of Spotify Wrapped, one of the platform's most beloved attractions that provides each user with a close look at their listening habits throughout the year — or at least through Oct. 31. With a click-through musical slideshow, users can discover their top artists and songs of the year, frequently played genres and moods and a full soundtrack to the year.

Instafest uses the same data as Spotify Wrapped, but is not sponsored by the company in any way.

The app went viral over Thanksgiving weekend, with celebrities like Questlove taking part in the fun. The hip-hop artist shared his concert lineup, which included appearances by Prince, Michael Jackson, Sade, Fiona Apple, Sly & The Family Stone and Radiohead, just to name a few.

No two lineups are exactly the same, though superfans of artists like Taylor Swift and Nicki Minaj took to Twitter to share their personalized concert bills with their friends and fellow fans. Check out a few highlights below.

Anyone at this festival should be given therapy for free #instafest pic.twitter.com/woR6FU4srY

only music festival where the most prevalent drugs are mood stabilizers pic.twitter.com/ggwWRpKvgG

Instafest is unavailable on other streaming platforms, including Apple Music and TIDAL, much to the chagrin of its users, who took to Twitter to voice their envy over the newest user-generated trend.

Me as an Apple Music user seeing everybody on my tl doing that instafest thing pic.twitter.com/zw2ErqTo2Q

Instafest is just one of many third-party apps and websites that use listener data to provide user-generated graphics made for social media. Receiptify turns listening data from Spotify or Apple Music users into a digital receipt based on frequent listens.

The Pudding, an AI project from Mike Lacher and Matt Daniels, connects listening data with reviews from music journalists to create a bot that will make fun of your music taste.