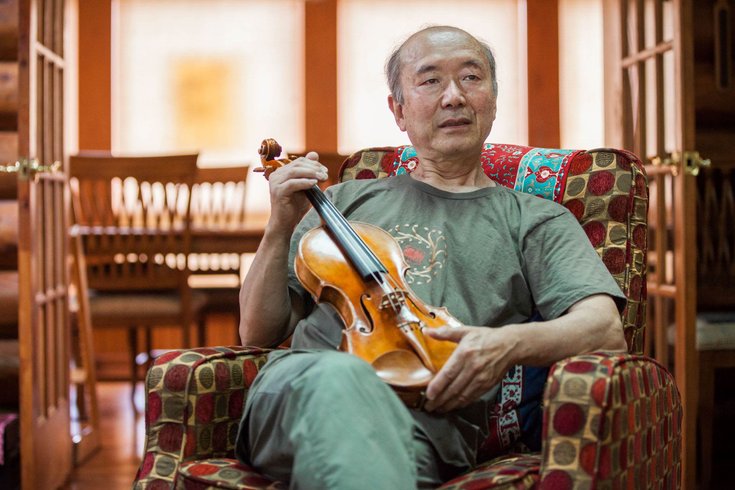 Hiroshi Iizuka interest in making musical instruments started with guitar. Then heard a violin for the first time. Near 70 now, he's not thinking retirement. “I can’t....Because this is wonderful."

On more than five acres of verdant woodland in Delaware County toils one of the world’s most accomplished luthiers.

Since arriving in the Philadelphia area in the late 1970s, Hiroshi Iizuka has outfitted hundreds of musicians with his handcrafted violas and violins. In an industry obsessed by expensive Italian relics, he has managed to carve a niche for himself — without advertising or a website — through immense skill and word of mouth.

Iizuka’s house resembles an enormous log cabin, and it is surrounded by an assortment of magnolia, conifers, weeping cherry trees, and a large bamboo grove. On the shaded back porch, rows of violin shells sit in the open air. Each one will “breathe” in the outdoors for eight months before Iizuka can finish them; the newest have the pale light look of balsa wood, while the aged sport a healthy brown tan. In the workshop below, the tapping of a tiny hammer echoes as his apprentice works on their latest instrument.

It takes about a year to finish one of the instruments, Iizuka makes about 10 of them a year. Musicians wait as long as two years to get one. 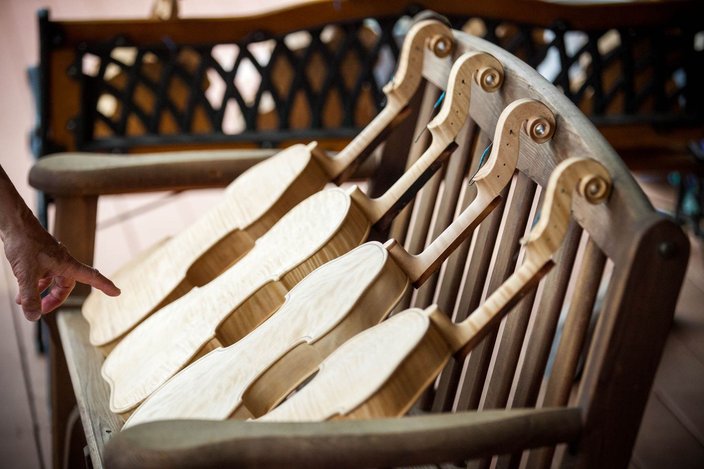 These nascent violins will sit in the outdoors for about eight months for seasoning, giving the wood a darker look without using stain. (Thom Carroll / PhillyVoice)

To date, Iizuka has crafted more than 350 violins and violas since 1977 and made a name, and a substantial living, for himself in the process. He has customers in “most states where classical music is played,” and in a long list of foreign nations: Germany, Japan, Costa Rica, Sweden, Hong Kong, and South Africa—to name a few. These days Iizuka, almost 70, devotes more time to hobbies new (beekeeping) and old (bird watching), but he has no plans to give up his profession.

“I can’t. I won’t retire,” says Iizuka, standing on his back porch surrounded by instruments in various states of readiness. “Because this is wonderful.”

That’s excellent news for the classical musicians of the world, especially those who don’t want to spend hundreds of thousands of dollars on antique instruments made by long-dead Italian craftsmen. Iizuka’s instruments, by contrast, sell for about $25,000 apiece for comparable, if not superior, quality. His custom-designed large violas, crafted in unusual shapes, may be his hallmark.

“I tried numerous violas all across Europe for two-and-a-half years…[but] a lot of the really expensive old instruments that I’ve tried out paled in comparison with this one,” says Vincent Peters, a violist in the world-renowned Royal Concertgebouw Orchestra in Amsterdam. While studying in Rome he met Philip Cooke, a Philadelphia-area composer and pianist, who brought Peters home for a visit– with a side trip to Iizuka’s house.

“After I played on this viola for about 10 seconds I asked if I could buy it," says Peters, who took the viola back to Europe the day he purchased it. "When I got Mr. Iizuka’s viola I was also trying out a $300,000 18th Century viola by a famous Italian maker. I compared Mr. Iizuka’s viola with the old expensive Italian one in our concert hall. The Iizuka won hands down.” 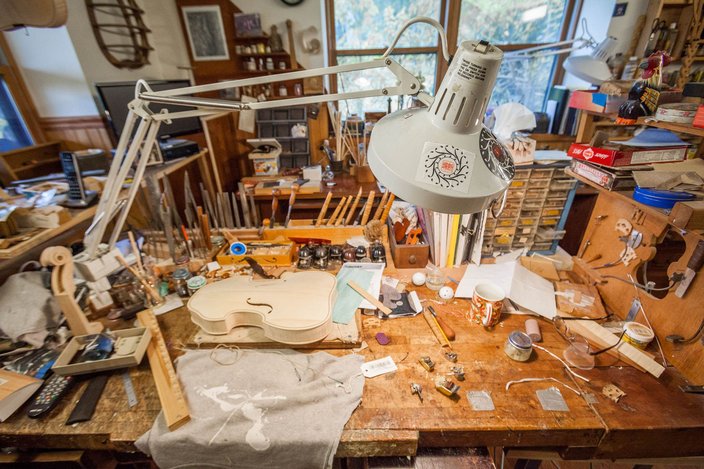 Such soaring praise wasn’t a guaranteed outcome. The way the modest Iizuka tells it, skill and a great deal of luck got him where he is today.

After graduating from college in 1968, Iizuka drifted around Tokyo working odd jobs, unsure of what to do with his life. He drove new Nissans from the factory to the showroom, worked for the YMCA, and grew his hair long, hippie-style. He also played guitar, although not in any professional capacity. (He was in no way a classical music enthusiast.)

“One day it dawned on me that there must be someone who makes these guitars and I started to think, maybe I can be a guitar maker,” he recalls.

But at age 24 Iizuka was too old for traditional apprentice programs and was turned down again and again until he found a man willing to take him into his kitchen-sized workshop. Two years later, his interest turned to violins after he heard one played for the first time at a small concert in the mountain town of Ina. He was so enchanted with the performance that he went backstage afterwards and asked the musicians if he could inspect their instruments.

At 26, the hunt for a new apprenticeship proved even more difficult. He finally found Soroku Murata, whose eldest apprentice had just quit in a huff and agreed to take Iizuka on—as long as he shaved his beard and cut his hair short. Two years later, his skill grown, he moved to Germany, where he had to learn Bavarian to win his license from the Chamber of Handwork. There he met his future wife, Daniela Stern of Bala Cynwyd, Montgomery County. 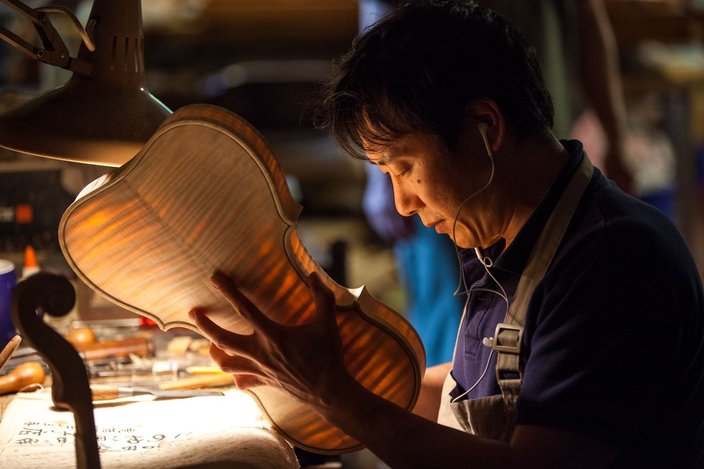 Yosuke Osawa, who is Hiroshi Iizuka's nephew and long-time apprentice, works on an instrument in the Delaware County workshop. (Thom Carroll / PhillyVoice)

“People who study violin making mostly want to make instruments and make a name for themselves, but the reality is that almost no one can do that,” says Stern, who is accomplished at violin repair. “The chances of that happening would have been even less in Japan and not terribly good in Germany. Everyone there was looking for something old, and preferably old and Italian. Here it was much easier to establish yourself in new making.”

Still, it wasn’t easy in America either. After they arrived in 1977, Iizuka had almost no income for three years. The young couple survived in a rent-free carriage house across from the old Barnes Foundation location while Stern worked at the (recently closed) Moennig & Son violin shop in Rittenhouse Square. Iizuka’s big break came in 1982, when accomplished viola player and champion Emanuel Vardi purchased one of his pieces. After that, as his renown spread, the couple’s Philadelphia base in the midst of five of the nation’s large cities – each with their own orchestra – became a real advantage.

Iizuka and Stern moved from their home in Narberth, Montgomery County, to this wooded estate in 2012. And still the orders come flooding in.

But when asked if he can play a tune on one of his instruments, Iizuka laughs.

“I can produce sound [to test his work], but not music," he says. "Music is my customers’ job.”

American composer and violist Scott Slapin, who met his wife while on tour with the Philadelphia Virtuosi Chamber Orchestra, plays a "viola d'amore style" viola made by Hiroshi Iizuka: