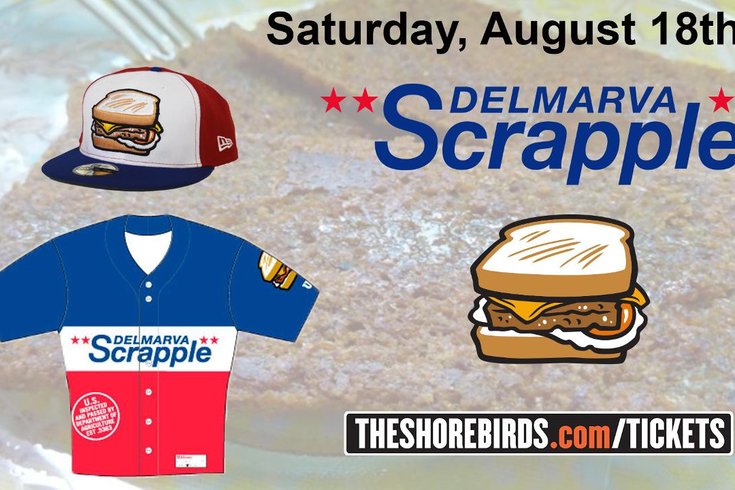 Promotional hat and jersey for the Delmarva Scrapple.

Scrapple's popularity extends beyond the Greater Philadelphia Area and South Jersey. The delicious breakfast meat is served across the Mid-Atlantic Region in Delaware and even Virginia.

It's also popular in Maryland, and one minor league baseball team in the state will be changing it's name for one game to honor scrapple, complete with scrapple jerseys and scrapple-themed giveaways.

On Aug. 18, the Delmarva Shorebirds — Single A affiliate of the Baltimore Orioles — will become the Delmarva Scrapple. Per a Thursday press release:

"We know how much our fans and the people of Delmarva love their scrapple. We are tired of bacon and sausage getting all of the attention, when in reality the Delmarva Peninsula knows that scrapple is the epitome of the perfect breakfast meat and far more superior than bacon or sausage," said Shorebirds General Manager, Chris Bitters. "This promotion will finally give scrapple the national attention it deserves. While some people have strong feelings about scrapple, if scrapple is wrong, we don't want to be right."

I would like to point out that, just a few months ago, I said it was time for a minor league team to do an extensive scrapple promotion when a New Jersey team became the "Pork Roll" for one game. Of course, I thought it might be the already meat-centric Lehigh Valley IronPigs, and not a team three hours south of Philadelphia.

The IronPigs did almost pay tribute to scrapple recently. They held a fan vote to decide which new meat should be added to their Pork Race, an event held at each game that features people in hot dog, bacon, BBQ and ham costumes racing against each other. "Ribbie," BBQ ribs personified, beat out "Scrappy."

Of course, if you don't feel like making the trek to just past the southern tip of Delaware, you can order some of Delmarva Scrapple gear online.