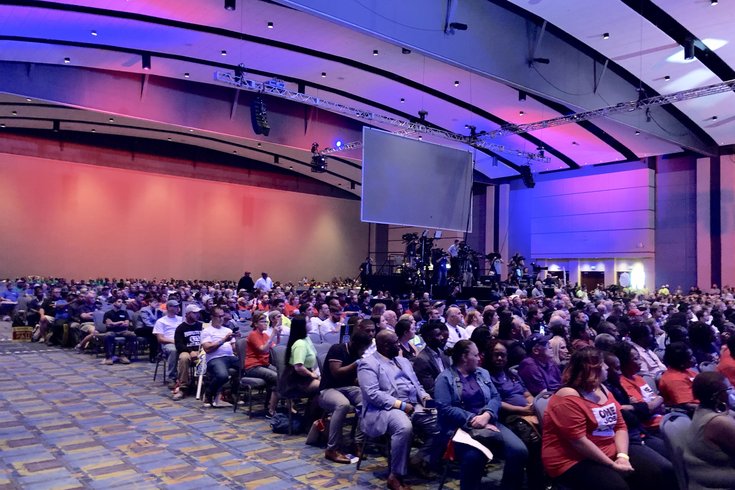 Union members from across the region packed the Convention Center for the inaugural "Workers’ Presidential Summit."

The Philadelphia Council AFL-CIO in partnership with the Philadelphia Building and Construction Trades Council, led by Business Manager John J. Dougherty, welcomed six Democratic 2020 presidential hopefuls to Philadelphia on Tuesday, September 17 for the inaugural "Worker's Presidential Summit" at the PA Convention Center. The candidates were asked for their positions on the labor movement's priorities by former 6ABC "Action News" reporter Vernon Odom and also fielded questions from rank and file union members in the audience of 2,000 attendees.

The event kicked off with AFL-CIO president Pat Eiding discussing the importance of unions in modern American society, and how desperately the U.S. needs a president who values labor's contributions to the nation and who will protect the labor union movement once they take office. He pointed out that the road to the presidency leads through Pennsylvania, and then thanked the people, unions and sponsors that helped make the event happen.

Vernon Odom laid the ground rules for the discussion before inviting Former Vice President Joe Biden on the stage to talk about his connection to unions. After laying out his upbringing in a working-class household and the moves his family had to make as a result of slashed jobs and benefits, Biden pointed to his record of supporting organized labor and asserted that the largest problem unions face is corporate greed and how that’s led to anti-union laws and the erosion of the middle class, which he then promised to reverse.

Following the former Vice President was the entrepreneur-turned-presidential candidate, Andrew Yang, who admitted that he lacked experience in union work, but focused instead on the story of how connecting with an organized labor leader led him to run for president. Yang then turned to policy, where he talked about his vision of a new kind of economy that didn’t depend on GDP or corporate profits, but focused instead on prioritizing the humanity of individual workers in the form of his much talked about “Freedom Dividend” as payment for the value organized labor adds to the nation.

Later in the evening, Senator Bernie Sanders took the stage to much applause, and then told his story of working jobs when he was younger that paid well and had protections that amazed him, and only existed as a result of the labor movement. His answers focused on the impact policies have on workers, but when he talked about his famous “Medicare for All” bill, another standing ovation filled the room.

The event was also attended by New York City Mayor Bill De Blasio, Senator Amy Klobuchar, and Tom Steyer, all of whom told stories about their connections to labor and what their presidency would mean for organized labor when it came time for each of them to make their case.

Every candidate was asked about some of the core problems that face organized labor, including the Trump administration's attacks on unions' rights, Trump's failed promise to invest in the nation's crumbling infrastructure, the fight for a $15 minimum wage, protecting unions' rights to organize and how each candidate would protect union jobs in traditional fossil fuel industries while leading the U.S. to a green energy future. The discussion also included how each candidates' presidency would affect the availability of healthcare to workers, and how they will combat climate change.

The evening closed out with remarks from President Eiding, who expressed gratitude for all in attendance and reaffirmed the important role organized labor will have in the upcoming election.