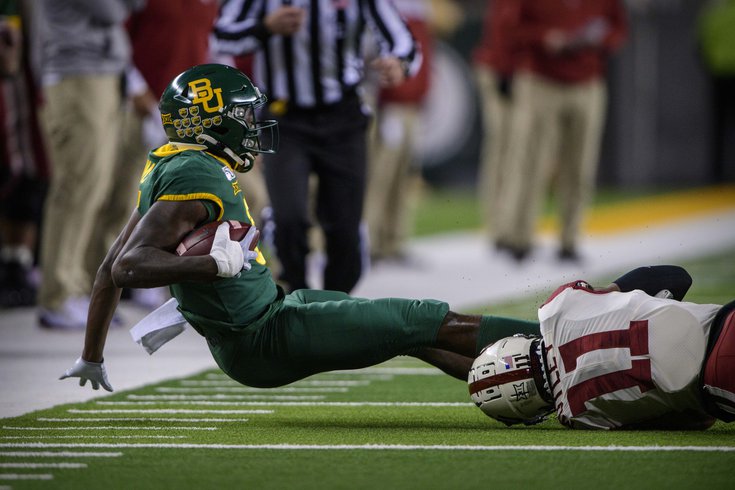 The Philadelphia Eagles passed on Baylor wide receiver Denzel Mims, pictured above, in favor of TCU's Jalen Reagor in the 2020 NFL Draft. Prior to the draft, Mims said he was "scared" of Philly.

In the 2020 NFL Draft, the Philadelphia Eagles passed twice on Baylor University wide receiver Denzel Mims, who was eventually selected by the New York Jets with the 59th overall pick in the second round.

During the pre-draft process, the Eagles were closely linked to Mims. He was considered among the best players likely to be available to Howie Roseman in a talented class of receivers.

Then Mims appeared in an interview with Adam Caplan and Geoff Mosher on the "Inside the Birds" podcast, where he essentially said he was afraid of Philadelphia. He and some of his teammates had visited the city with former Baylor and Temple head coach Matt Rhule, who's now coaching the Carolina Panthers.

We went up there and just spent a lot of time together. And the experience I had, I was very scared. I wasn’t familiar with the whole city and it was a lot going on. You see a lot of people that look scary. And, you know, I’m not part of that, I don’t like that. I mean, I had a bad experience, you could say, going up there that first time. But I feel like if I go there more and if I get familiar with it, I’ll have a great time.

At the time, the quote was interpreted as Mims lacking the grit and intensity of a prototypical Philadelphia athlete. On one hand, it made him sound like a humble and nice guy, if a little sheltered. Philadelphia is a large city with a high rate of violence and poverty, so Mims' upbringing in Daingerfield, Texas (name aside) probably didn't expose him much to urban life.

On the other hand, it was just an unusual thing to hear a football player say.

Flash forward to this past weekend, and Mims apparently elaborated on his feelings for Philly. While playing "Call of Duty," Mims was asked about the pre-draft comments, and had a much different tone.

#Jets rookie WR Denzel Mims on his pre-draft interview with the #Eagles : “I didn’t like that dirty a**, trash a** city.” (Video : phillybirdsonly IG) pic.twitter.com/Cws1KUtMk1

Granted, we don't know if Mims had anything else to say after this sound bite. Taken on its own, it's kind of an immature contrast to be "scared" of Philly and act upstanding, yet veg out on a combat video game and casually curse the city a couple months later. Mims probably didn't like the reaction Eagles fans had to his initial comments, so he decided to dish it back.

It is interesting that former Eagles front office executive Joe Douglas, who's now the Jets general manager, decided to pick Mims for what figures to be a big role in that offense. Robbie Anderson left New York to reunite with Rhule, his former Temple coach, in Carolina.

The New York Jets have never defeated the Philadelphia Eagles in a regular season game, ever. Apart from a customary awful preseason game, or a wildly unlikely Super Bowl matchup, the Eagles won't face the Jets again until 2023.

Until then, Mims can enjoy East Rutherford, home of the gigantic American Dream mall that took forever to build and now looks to be a financial nightmare.