Details on Jimmy Butler's groin injury, which appears to be a minor issue 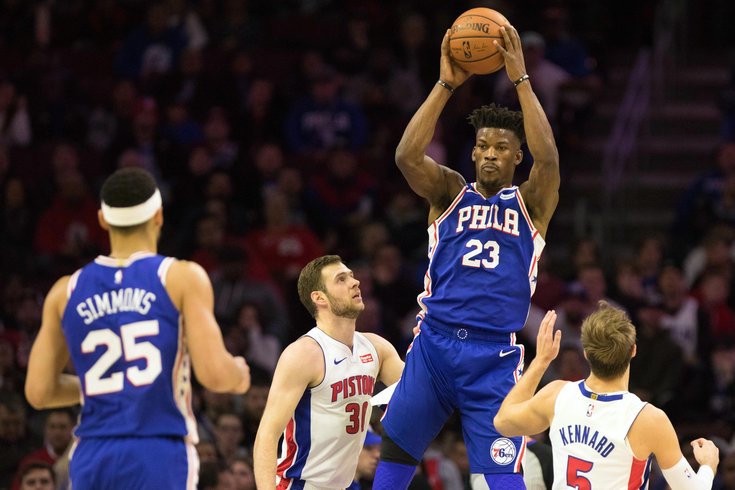 When Jimmy Butler was ruled out of Monday's game against the Detroit Pistons midway through the second quarter, it was natural to fear the worst. After a Sixers representative gave me a non-update during Tuesday's mid-morning hours, that thought began to crystallize.

But fortunately for the Sixers, it appears they have dodged a major injury on the Butler front. While he is doubtful for tomorrow's game against Brooklyn and did not participate in today's practice, the Sixers say he is not dealing with a mjor issue.

"The MRI came back favorable," said Brown. "In regards to what are we guessing or what are we thinking going forward, we really can't make that prediction. What we can say is that the MRI revealed nothing significant, but we deem him to be doubtful for tomorrow night."

Just reading between the lines, that's a good thing. The Sixers did not turn to indefinite timelines or "to be evaluated" periods, and instead focused on the immediate impact on the team. That says as much as any formal update, and suggests he will be back sooner rather than later.

Team representatives spoke with PhillyVoice about the specifics on Tuesday. Philadelphia's medical staff, after examination and conversations with Butler, determined there was not a specific moment (at least that anyone is aware of) in Monday's game vs. Detroit that triggered the issue.

Butler returned to the Sixers' bench with 2:20 to play in the first quarter, and complained about the pain to staffers on the bench. From there, Butler was taken back to the locker room and the determination was made to shut him down for the night as a precautionary measure.

From my understanding, Butler came to the practice facility on Tuesday for further examination and expressed to Sixers staffers that much of the pain from the night before had subsided overnight.

If Butler isn't able to go on Wednesday night, it will leave the Sixers painfully thin against a Brooklyn Nets team that comes at you in waves.

Given the checkered history of the Sixers' medical staff over the last decade-plus, it's worth treating this "good news" with a little skepticism. Still, Philadelphia ultimately appears to have caught a break on this one.