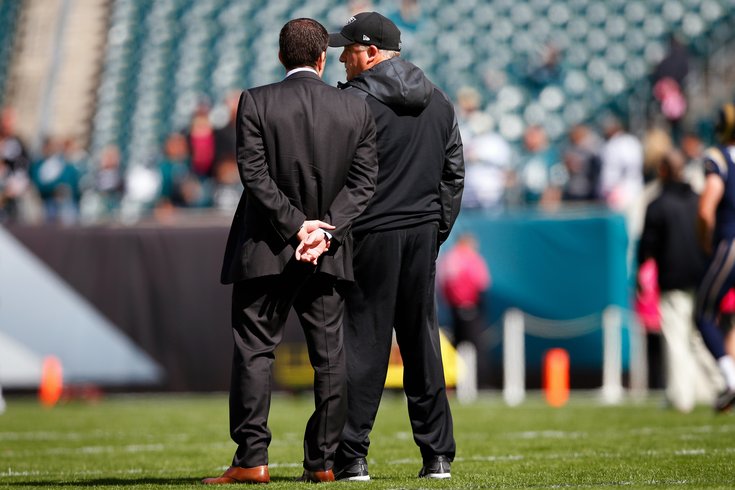 "Lol, you gave Miles Austin how much money?"

When the Eagles signed Miles Austin last offseason, it made no sense whatsoever. He was an old, declining, injury-prone receiver, who lacked special teams experience. I'll expand:

• Special teams experience: Austin hadn't played special teams since 2009. Typically, you're playing special teams if you're a No. 4 or No. 5 receiver in the NFL, especially for a coach in Chip Kelly who put such a heavy emphasis on special teams.

Somehow, the Eagles gave Austin a one-year deal worth $2,225,000, $1 million of which was guaranteed, that effectively guaranteed him a roster spot in the process. And not only that, Kelly signed him 18 days into free agency, when players who are still on the market are typically happy to find whatever new home they can. Austin should have been given nothing more than the league minimum with a chance to earn a roster spot in training camp.

Austin predictably stunk out loud in 2015, and he was cut before the season ended.

Yesterday, the Eagles signed former Rams and Ravens wide receiver Chris Givens, who has also been ineffective the last two seasons after showing promise early in his career. Givens was still available eight days into free agency, and he signed a deal more commensurate with the level of interest the rest of the league was showing. According to Adam Caplan of ESPN, Givens' deal was for a measly $840,000, of which just $180,000 is guaranteed.

Both Givens and Austin should have been given extremely low level deals. Roseman landed Givens on one, while Kelly inexplicably gave Austin a deal that made him the 64th highest paid WR in the league. That is essentially low-end number two or high-end number three receiver money.

Kelly had little understanding of football economics, highlighted by the deals given to Austin and DeMarco Murray. That is an area where Roseman is an asset.

As for player evaluation...