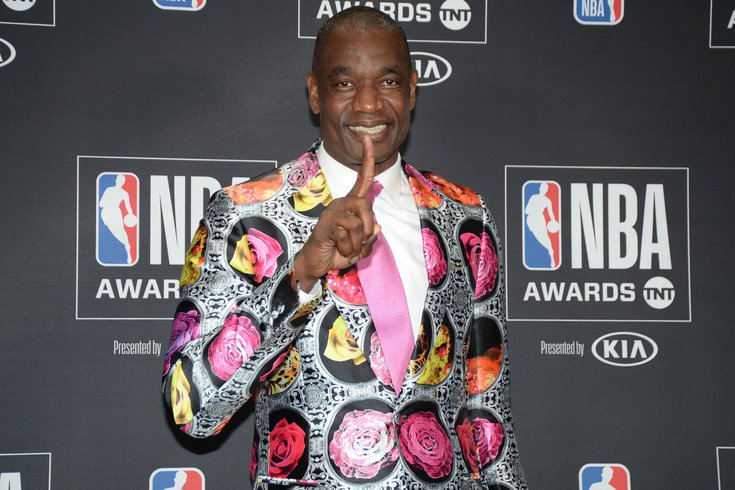 At 7 feet 2 inches, Dikembe Mutombo makes even one of the NFL's most imposing stars, Seattle Seahawks wide receiver D.K. Metcalf, look like a regular guy.

Few NBA big men are as beloved as the towering Dikembe Mutombo, whose dominance as a shot blocker and rebounder made him one of the league's most feared court generals over a career that spanned 18 seasons.

The Congolese-American is remembered fondly in Philadelphia for his role on the magical 2000-2001 Sixers team that reached the NBA Finals behind the grit of Allen Iverson in his MVP prime. On a team comprised mostly of role players, Mutombo gave the Sixers some imposing size in the post and a pretty mean, signature hook shot to boot.

Mutombo's time with the Sixers was short-lived and he's best-known for his years with the Atlanta Hawks, but his finger-wagging stint in Philly helped define a peak in franchise history.

Mutombo has remained an ambassador for the NBA and is a respected figure in the wider world of professional sports. He recently posed for a photo with Seattle Seahawks wide receiver D.K. Metcalf and put in perspective just how massive he is next to even the most impressive athletes of the present (h/t BroBible).

Mutombo was officially listed at 7 feet 2 inches and 260 pounds during his playing career. Metcalf, whose insanely muscular build raised eyebrows ahead of the 2019 NFL Draft, stands 6 feet 4 inches and 235 pounds. For comparison, Joel Embiid is about 7 feet even and 280 pounds.

If you were to encounter Metcalf on his own, you'd be floored by his otherworldly fitness, but Mutombo makes him appear like a regular guy.

Next to Allen Iverson, who had a slight 6 foot frame, Mutombo's size always seemed pretty consistent with expectations. Beside Metcalf, even another four inches doesn't put much of a dent in Mutombo's perch.

A couple legends, Dikembe Mutombo and Allen Iverson are hanging out courtside at the Sixers game. pic.twitter.com/f4OVzkflNx

Granted, football and basketball are sports with very different skill sets. You wouldn't see a 7-footer on an NFL field. Former Eagles wide receiver Harold Carmichael is 6 feet 8 inches, making him one of the tallest NFL players in league history behind former Ravens lineman Jonathan Ogden, who's 6 feet 9 inches.

Mutombo made it into the Naismith Memorial Basketball Hall of Fame in 2015, cementing him as a generational NBA player. Metcalf has been stuck in the heads of Philly fans since the 2019 NFL playoffs, when he threw up a peace sign to the stadium after a game-sealing midfield catch at Lincoln Financial Field. Maybe if he's not keen on the Seahawks' rebuild and hits free agency next year, Mutombo will put in a good word for the city.