Batch will be called "Ain't Nothin' to Funk With" 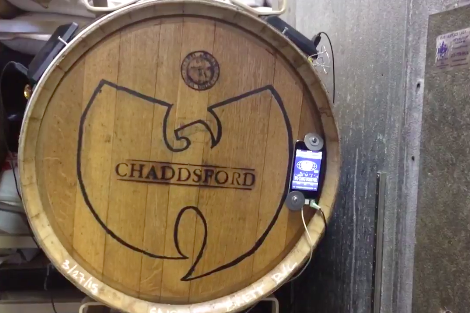 Gardeners have long speculated about a positive link between playing music and plant growth. The science of vibration may come across as wishful thinking, but even if a relationship is only indirect, it's still a great excuse to put on some tunes in the company of your plants.

The music lovers at Philadelphia's own Dock Street Brewing Company have another idea: they'll be taking this logic and applying it to the yeast in a barrel of aging Saison, which is considered the beer equivalent of sourdough bread. For six months, 24/7, the Dock Street team will be pumping Wu Tang Clan into batch dubbed, "Ain't Nothin' to Funk With," according to Popular Science.

What do they expect to happen?

“We’re not quite sure to be totally honest," says Aleksandr Certo-Ware, a member of the Dock Street team. "Yeast is a living organism and it reacts to the environment around it. Certainly I think there’s sound science in vibration and the experiment here—I think it will absolutely have an effect on the organism.”

To complete the experiment, the team has rigged a pair of USB-powered computer speakers to the barrel, which gets its own iPod touch loaded with Spotify and a 500 song Wu Tang Clan playlist.

This isn't the first time that alcohol has been fermented to music, according to the report. In 2012's 'The Art of Fermentation,' author Sandor Katz describes centuries of fermentation rituals including drumming and other noisy events. On the other hand, Chris Powell, a lecturer in yeast and fermentation at the University of Nottingham, tells Popular Science that the Dock Street team's time table and apparatus probably won't have much if any effect on the beer.

Whatever comes of this method remains to be seen, but Old Dirty Barrel shouldn't come out any worse for the wear.