'Dog Joy' details how adopting a canine can be an 'eye-opening, life-changing experience' 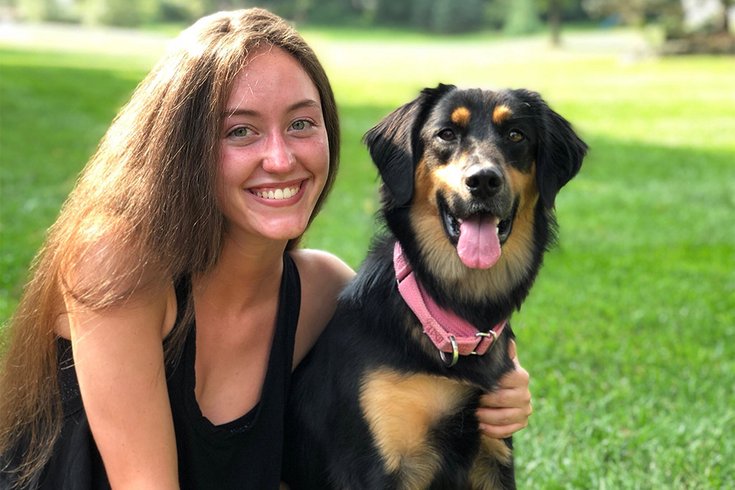 Caroline Capuzzi, seen posing with her rescue dog, Stella, has written a book featuring a collection of rescue stories from her family and 25 others. The 17-year-old student describes Stella as her “other teenage sister.”

October is the American Humane Society’s Adopt a Dog Month, so high school senior Caroline Capuzzi could not have chosen a better time to publish her new book, “Dog Joy: Amazing Stories of the Indescribable Love Only a Rescued Dog Can Give.”

Capuzzi and her father, Mike, intend the self-published compilation to be shared by readers and donated to rescue organizations and vets.

It consists of 26 stories from rescue dog owners, detailing the joyous and sometimes heartbreaking ways they saved their four-legged best friends. Caroline Capuzzi includes her own story about her family’s rescue dog, Stella, whom she describes as her “other teenage sister.” Stella was rescued from the Greenmore Farm Animal Rescue in West Grove, Chester County.

RELATED READ: Why losing a dog can be harder than losing a relative or friend

All money from book sales goes to rescue organizations and shelters selected by each contributor. The two-dozen-plus featured canines were rescued from organizations across the country as well as the Philadelphia area, including Don’t Bully Us Rescue, a pit bull rescue in Philadelphia, the Dog Town Rescue in Colmar, Montgomery County, and the Berks Animal Rescue League in Birdsboro, Berks County.

Capuzzi, 17, a student at B. Reed Henderson High School in West Chester with plans to study journalism in college, has always had a passion for dogs. She began working at the West Chester Animal Hospital last year, helping to care for rescues in their kennel.

According to the American Society for the Prevention of Cruelty to Animals, about 6.5 million companion animals enter U.S. shelters every year, with dogs numbering about 3.3 million. About 670,000 of those dogs are euthanized annually.

Through their collection of stories, the Capuzzis sought to break down preconceived notions that animal-lovers may have about adopting a rescue dog.

“Once you start reading stories about them and even going to meet them, you just realize it could be one of the most eye-opening, life-changing experiences you can have,” Caroline Capuzzi said.

She and her father initially came up with the idea for “Dog Joy” while discussing their own rescue dog, Stella, and how she made such a beloved addition to the family.

At first, Mike Capuzzi was a little hesitant to bring home a rescue dog because he knew so little about this kind of dog adoption. “I was concerned about the history and background of a rescue dog and how well behaved he/she would be,” he said.

“Being able to bring them into your home and show them what it’s really like to be loved and cared for. I think that is the best part about it.” – Caroline Capuzzi

But he quickly came around to his daughter’s way of thinking.

“Fortunately, we got a great dog, Stella, and I am a complete convert now,” he said.

He figured there must be others with this kind of initial trepidation toward rescue dogs, and wanted to share his family’s story of adopting Stella to illustrate that the pros of rescuing a dog by far outweigh the cons.

ADOPT A RESCUE DOG, SAVE A LIFE

As father and daughter tossed around ideas for how to get their story into the world, Mike Capuzzi remembered a project he did with a local program dedicated to helping high school students get into college. He asked the students to write about the ways the organization changed their lives, compiled them into a short book, and raised a lot of money through book sales for the non-profit.

As a marketing professional, Capuzzi reached out to some of his clients in hopes of finding people who wanted to share their rescue dog stories, and was pleased to discover that 25 dog owners were keen to contribute their experiences.

After lots of writing, compiling and proofreading, “Dog Joy” was born. For Caroline Capuzzi, the best part about adopting a rescue dog is the canine life saved by each owner. 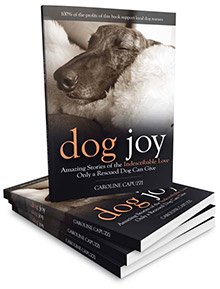 “Dog Joy” is a celebration of rescue dog adoption. Proceeds from sales are going back to rescue organizations selected by each contributor.

“You don’t know where they would have gone if you hadn’t rescued them,” she said. “You’re almost rehabilitating them because so many of them came from such hard backgrounds and went through so much.”

Some of the stories in the book will elicit laughter, others tears. One of the pieces that she considers the most touching is Sandra McGuckin’s story about how she rescued her dog Soli, who had been seriously neglected and thrown out of a moving truck. After rescuing Soli, McGuckin started her own animal rescue facility, Stray Network Animal Rescue in Memphis, Tenn.

“Being able to bring them into your home and show them what it’s really like to be loved and cared for,” Caroline Capuzzi said. “I think that is the best part about it.”

The authors have a couple ideas for future editions of “Dog Joy,” one of which would take the form of a volume with new contributors highlighting a bunch of rescue organizations, each to receive a cut of the profits. Another version would consist of dog adoption stories from one shelter or organization, which would receive all of the proceeds from that particular volume.

“Dog Joy” can be purchased online for $12.95 at www.dogjoybook.com.