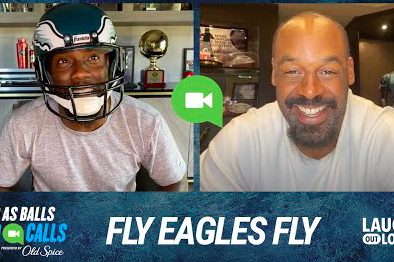 McNabb appeared Thursday in a new installment of Hart's improvised "Cold As Balls" web series, which usually features the comedian and a special guest in a pair of ice baths. It's part of the comedian's Laugh Out Loud network.

Thanks to the coronavirus pandemic, the series has been converted into "Cold Calls," which began this week with 49ers cornerback Richard Sherman. McNabb conducted his interview from a memorabilia lair in his home.

Topics covered in the conversation include McNabb's basketball aspirations at Syracuse, the Campbell's Chunky Soup commercials, the never-ending drama with past "Cold As Balls" guest Terrell Owens, and McNabb's Pro Bowl appearances.

The real head shaker here is Hart's atrocious attempt to sing the Eagles fight song at the end of the interview. The amount of stammering and lyrical amnesia would put any inebriated Eagles fan to shame. The only thing to conclude is that Hart has been drunk for more than two years since he tried to lift the Lombardi Trophy with the Eagles in Minneapolis.