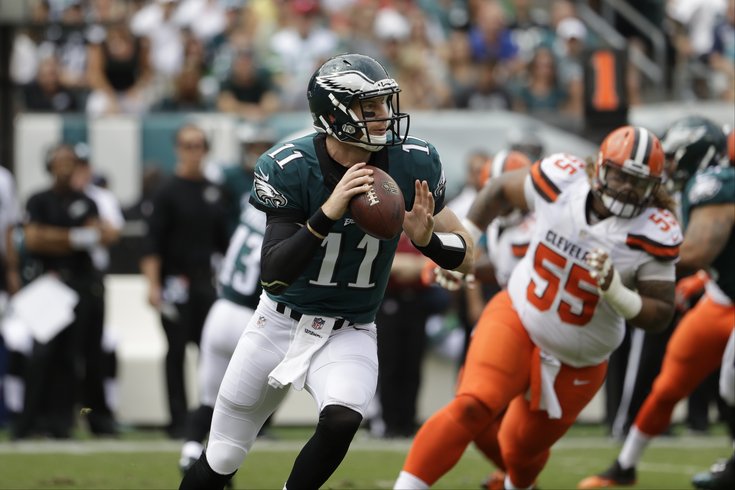 Carson Wentz was perfect against the blitz last Sunday.

As you might expect for a defense facing a rookie quarterback making his NFL debut, the Cleveland Browns tried to blitz Carson Wentz last Sunday, especially early in the game, and in key situations. That did not work out so well for them, as Wentz completed all eight of his attempts against five or more pass-rushers, according to Tim McManus of ESPN.

As we showed in our breakdown of Wentz's debut performance, one of the biggest plays in the game was a quick-reaction, quick-release throw by Wentz to Zach Ertz in a 4th and 4, shown here.

Or how about this beauty?

In a press conference with reporters Thursday morning, Doug Pederson explained why Wentz was successful when facing added pressure.

"It comes back to him being here at 5:30 in the morning on Wednesday and Thursday last week," said Pederson, "and starting to dive into the film, and preparing himself that way.

"And I think that two, I look at Chase Daniel and what he did with Alex Smith and how he was sort of that backbone for Alex, which he is for Carson. They're studying together, and I think that's important because I've been in Chase's role before as a backup quarterback, and I know what it means to be able to dive into the tape and then have answers for the guy that's playing. They prepared themselves last week for it, and again, credit too to the offensive line and backs for picking up these blitzes. It's something that we work every day, so exposing your guys to it also helps."