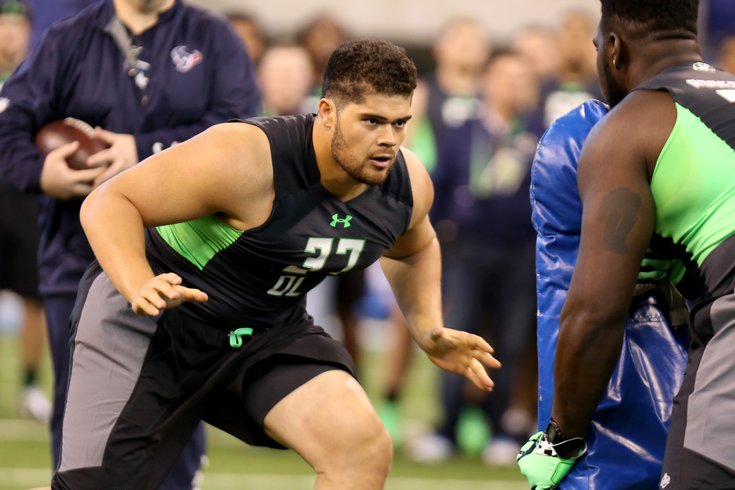 Throughout OTAs and minicamp, rookie third-round pick Isaac Seumalo was a no-show to Eagles practices because his college (Oregon State) runs on the quarters systems.

During his absence, offensive line coach Jeff Stoutland would often Skype with Seumalo, coaching him from afar to keep him from falling behind. According to Doug Pederson, Seumalo's time away did not hurt very much.

"I thought he came out here in a great frame of mind, in shape, ready to go," Pederson said. "He’s so smart and intelligent. I give coach Stoutland a lot of credit for spending time with him this offseason, Skyping with him during the ‘regulated hours' that he could talk with him and did a great job and caught him up, and he looked good today."

Back in May, Pederson named incumbent Allen Barbre the starter at LG.

"Right now it is Allen Barbre's job," he said, "and I think again that's something we did through the draft and a little bit of free agency is to kind of shore up that spot. I really like where we're at. I like the depth at that position right now. But yeah, Allen Barbre is my guy and he's our starter."

Barbre did not play well a season ago, and he's now 32-years old. He also counts for $1,950,000 on the cap in 2016, $1,650,000 of which the Eagles could save if he were to be cut or traded. It would be a significant benefit if one of the Eagles' younger and cheaper options were to outperform Barbre and win that job outright in camp.

Pederson previously said that Seumalo will be working specifically at LG, which is the lone spot seemingly up for grabs along the offensive line. That's a good sign for Seumalo to have a legitimate chance to win that job.

As we've noted, rookie offensive linemen started for Pederson's Kansas City Chiefs in each of the last three years:

While the starting LG job is Barbre's to lose, Seumalo will likely be given every opportunity to beat him out.