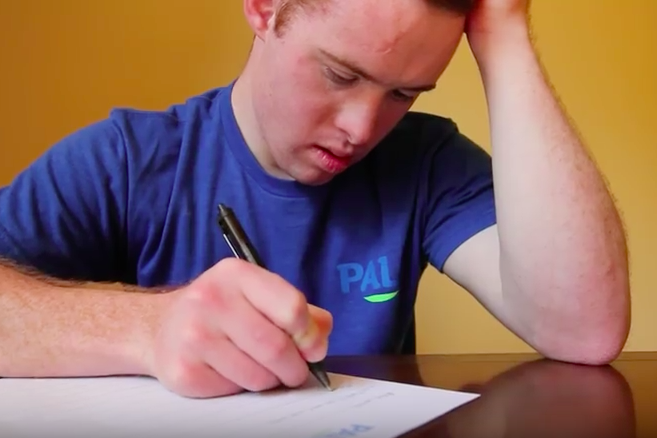 Jason Newbury writes his letter of congratulations to new parents.

When a child is born with Down syndrome, the experience can become even more challenging, especially when doctors often respond with an “I’m sorry.”

But Camp PALS, a camp for young adults with Down syndrome, is aiming to change that.

Instead of statistics and coping strategies, PALS is sending new parents a simple, encouraging message: Congratulations.

"Throughout my life I have heard the story of how my parents received the news that Jason had Down syndrome," PALS co-founder Jenni Newbury Ross said.

"They were given condolences, told all the things that Jason would never achieve, and then simply informed that they did not have to take him home if they didn't want to. Days later a nurse came in that had heard the news about Jason and began showing my mom photos of her young boy with Down syndrome playing baseball. For the first time, someone pointed out the potential and ability in Jason, instead of a diagnosis."

As part of Down Syndrome Awareness Month, the Congratulations Project is an "initiative in which members of the PALS family write letters to new members of the Down syndrome community. These letters are designed to inspire, encourage, welcome and, most importantly, congratulate new parents and siblings of a child with Down syndrome."

Ross' brother Jason Newbury is featured in the video above, which PALS released this month.

"My name is Jason, and yes, I have Down Syndrome. Just like your baby," Newbury says in the video above as he reads his letter.

"I want you to know that my mom was scared at first. She worried about me. People said that I was not perfect. I understand what it feels like to be left out. But now I'm proud to be an advocate and have friends like Nathan. Your child will be beautiful and wonderful and a blessing. This gift of your child will help you discover your own truth. I love my life because all things I do help me to prove that your child will be amazing."

Read some of the featured letters here.

The Congratulations Project began in 2012 and has grown every year, with campers delivering letters to almost 300 new families over the past 10 months, Ross said.

"Our goal is that every time a family receives a letter, they are given a glimmer of hope, a chance to see the possibilities, and an opportunity to dream about the future of their child."

Learn more about Camp PALS and its initiatives here.