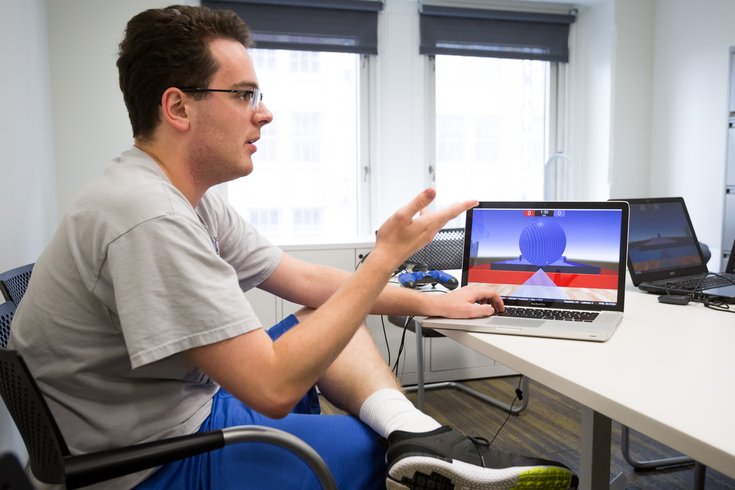 Video games are traditionally driven by their graphics and visual style, but a team of nine senior Drexel University computer science students is looking to challenge that.

"We ... wanted to do something with video games, and we wanted to do one for our senior design project. So we looked at the technology available, like Oculus Rift, and came to the conclusion we didn't want to do another 'Call of Duty'; we wanted to give back, do good — something that had a purpose," TJ Heiney, project manager and lead designer of "Goal Ball," a game for people with low vision and blindness, told PhillyVoice. "Listening to all the projects getting announced, there was a list of projects available, [a game for people with low vision] came up and we looked at each other like ‘This is really what we want to do.’”

The intrigue, Heiney explained, was that video game developers — small and large — seldom tap into the accessibility market because, in truth, it either takes too long to understand or is perceived as too niche an audience. Considering they were making the game for academic and not commercial purposes, however, they felt the time was right to explore what a video game for those with low vision could look like.

What they discovered: People with vision loss and blindness were already playing video games. The simple truth was they just found ways to adapt.

"They’re playing 'Call of Duty'; they’re playing 'Madden.' And they might not be playing it to the full extent of other people but they are learning how to use what we can use but with limits," Heiney said. "So, to have something they can do, and to maybe have other companies start using things so they can start adapting, would be awesome.”

Heaney and his team ultimately decided to tackle goalball as their gameplay mechanic, after receiving feedback from an Overbrook School for the Blind student who took an interest in the sport. In that soccer-like game, two teams of three wear black eyeshades to block vision and shoot a rattling ball into one of three nets. The volleyball-sized court includes tactile material so players can feel their way around boundaries.

Goalball was ideal from a design standpoint because of its simplicity, as well as the array of options technology afforded them. After toying with using motion-sensor controllers from Nintendo and Microsoft, they received overwhelming feedback that people with low vision are more comfortable using a standard controller. They settled on using rumble and dynamic sound to simulate goalball. 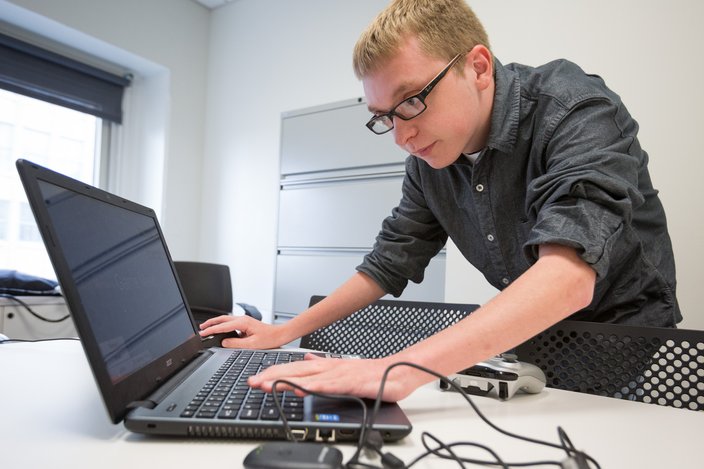 TJ Heiney, project manager and lead designer, sets up the game's interface during a recent interview with PhillyVoice.

In short: Rumble — technology that has been around since Nintendo's N64 — allows players to feel where the ball is, where the goal boxes are and how forcefully a ball is thrown. The sound, meanwhile, is recorded and implemented (using Unity) in a way that allows players to hear in a 3-D space. What direction a ball may be flying at a player, for example, will affect what they hear, allowing them to use heightened hearing to stay oriented.

Gratefully, the approach seemed to go over well after testing with approximately 20 students at Overbrook.

“Our [senior design] professor was always like, ‘I want the game to elicit an emotional response.' And we came back from testing that night like, ‘Someone rage-quit,'" Heiney said, laughing. "They were so passionate about playing, that one student rage-quit when they lost.”

After a quick test run-through of the game using an Xbox controller and a pair of headphones, I decided it was a bit like playing "Pong" — only stripped of the sense of sight. For those playing who have impaired vision, the graphics are fairly blocky and straightforward, but it's easy to see how the simulated rattling of the ball and varied intensity of the rumble could allow someone with no picture to stare at to have a certain ease of use. 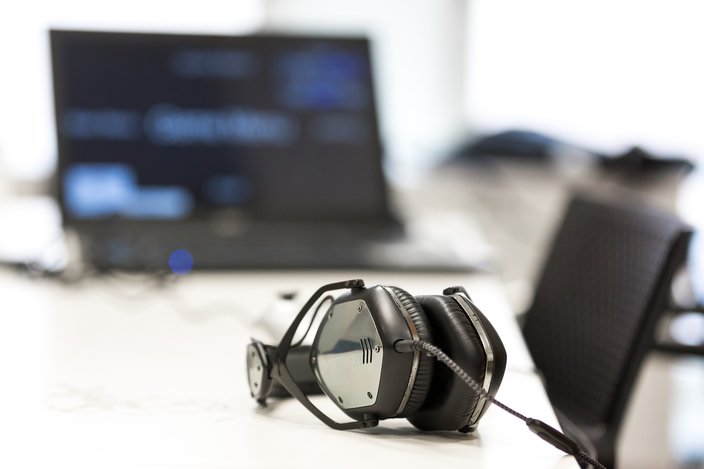 Audible elements in the game play a large role in accessibility for the visually-impaired players.

Better yet, the video game is made with local and web-based gameplay in mind — the online-enabled feature being especially important in a community that, though consisting of more than seven million people across the U.S., is still relatively small.

"I think the overall hope is this product will be able to get to someone who maybe doesn’t go to a school for the visually impaired, but goes to public school and maybe there aren’t enough people there who play that game," Heiney said. "Now she can play it and meet with other people with visual impairment and enjoy an activity they enjoy.”

So, what's next for the game? Jeff Salvage, the adviser for senior design projects, told PhillyVoice it will be handed off to a new class of Drexel students who will polish and eventually release the game. Drexel hopes to sponsor the first-ever digital goalball competition — and, moreover, push through more accessibility projects like it. He said they're currently exploring how they can use technology to allow ALS patients, who often are unable to speak or even move, to communicate through social media.

Those interested in contributing to the development of "Goal Ball" and future accessibility projects are encouraged to pitch in through the Drexel University Department of Computer Science fundraiser page.