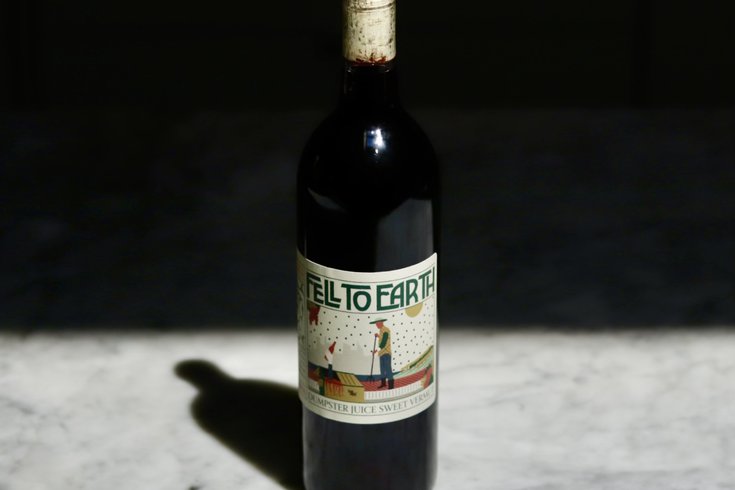 'Dumpster Juice,' a brand of craft vermouth created by Bloomsday Cafe founder Zach Morris and manager Tim Kweeder is set to get its own production space in South Philadelphia. The vermouth was popularized during the early days of the pandemic, and would sell out within hours. Fell to Earth, the production space, is set to open in 2023.

Dumpster Juice, a vermouth brand created by the team at Society Hill's Bloomsday Cafe, is set to open its own production space in South Philadelphia next year.

Owner Zach Morris and general manager Tim Kweeder spilled the news in a series of Instagram posts last week, promising more of the wildly popular beverage they created during the dark early months of the pandemic. A location for the upcoming facility hasn't been revealed, but the duo said a lease has been signed for a warehouse that will be fully dedicated to Dumpster Juice.

The name of the new micro-winery, Fell to Earth, is a spin on a David Bowie classic that Morris and Kweeder bonded over when they first met, prior to Morris opening Bloomsday in 2019. Rather than continuing the brand's current set-up, which involves producing, bottling, and selling the fortified wine from a winery in Lancaster County, Dumpster Juice will be produced and sold in its own limited-production winery, which Kweedar called Philadelphia's first "vermouthery."

Americans typically think of vermouth and other apéritif wines as "the thing that goes in their Manhattan or their martini," Morris said, but they're well-known and appreciated in other parts of the world for their special tastes.

Morris always respected Kweeder's skills as a beverage pro in the city, but once Kweeder came to work as general manager at Bloomsday, the two immediately realized they had a shared interest in vermouth.

Though Morris has made a hobby out of homemade vermouth for more than a decade, the silly Dumpster Juice name and concept originated at a class he was teaching at the Philadelphia Wine School in 2010.

"A student wanted to make a classic French spritz from scratch as a side project, and I said that we needed to make tonic and we needed to make vermouth," Morris said. "We came up with a recipe and the whole class is sitting there watching us. Someone asked me how to make vermouth. I said it's wine fortified in a neutral spirit, like vodka. I made a joke — you could make it out of dumpster juice, you could make it out of anything."

The vermouth recipe wasn't finalized until more than a decade later, when Kweeder and Morris were looking for a way to make it at Bloomsday Cafe at the start of the pandemic.

The first batch of Dumpster Juice was advertised on Instagram in May 2020, selling directly from Bloomsday Cafe during the statewide COVID-19 disaster declaration. At the time, restaurants and bars were allowed to sell cocktails-to-go.

Morris and Kweeder began posting about new batches of their fortified wine every few months — and with the direct-to consumer model, they would sell out within hours.

"They're small batches, but there was a genuine fervor to try something that was a bit weird but at the same time, completely conventional," Morris said. "Vermouth is age-old in that you're waste-streaming things to preserve something with one other thing you might have on hand."

The temporary cocktails-to-go law allowed Morris and Kweeder to sell their vermouth right up until the state's General Assembly voted to end Gov. Tom Wolf's emergency declaration in June 2021, which suddenly made to-go drinks illegal.

"It meant that we had just finished a batch of vermouth on site that a day ago was legal to sell to willing customers who were supporting a pandemic-afflicted business, and all of a sudden we had all this inventory that we couldn't sell to-go," Morris said. "It had a massive impact for a fun little project that had actually become a viable business. Frustrating would be putting it lightly."

Currently, Dumpster Juice is produced, bottled, and sold directly from Vox Vineti Winery in Christiana, Lancaster County. The vermouth is derived from wines and other products that Vox Vineti and other wineries do not intend to use or sell.

Until Fell to Earth opens its doors in 2023, customers can still buy new batches of vermouth from the suburban winery. Once the business gets up and running, it will focus on filling wholesale orders for restaurants, wine shops and other businesses.

Morris believes that drinking Dumpster Juice — disgusting name aside — has helped people realize that vermouth goes a long way on its own. He and Kweeder hope that the dedicated space will expand the business, though it will be small at the outset.

Those who are interested in updates can check out Bloomsday Cafe and Dumpster Juice's Instagram accounts for new batch drops before the Fell to Earth production space officially opens.