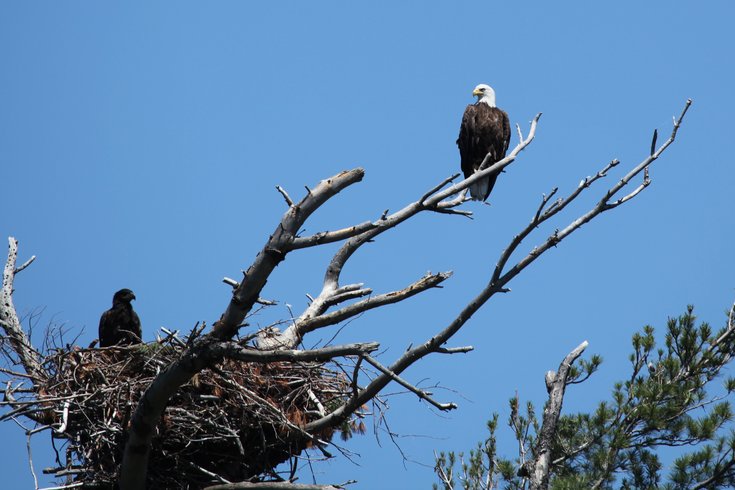 Someone illegally cutdown a tree holding an eagle's nest in Salem County in early February, destroying at least one egg. Officials hope the eagle pair nest again. A fine of up to $5,000 and a jail term of as much as a year is possible.

A South Jersey tree topped by a bald eagle nest was illegally cut down in early February, smashing one or more eggs inside, according to Larry Hajna, a spokesman for the New Jersey Department of Environmental Protection.

The adult eagle pair were not injured, Hajna said. Destroying an eagle nest intentionally carries a fine of up to $5,000 and one year in prison.

The tree was located on a private property in the Elmer-Daretown area of Salem County, though state officials declined to provide an exact location.

Officials believe it was cut down around Feb. 9.

Since it is still early in the nesting season, Hajna said there are hopes the eagle pair will build a new nest and produce additional eggs.

Eagles had greatly declined due to habitat issues and a pesticide which thinned eggshells, but there numbers have come back with preservation efforts and the banning of DDT.

Eagles, while no longer considered endangered across the United States, are still protected by state and federal laws. In New Jersey, the bird is classed as endangered during their nesting season.

A 2015 state survey found there are about 191 bald eagle nests in New Jersey. About 150 of them were classified as active because they produced eggs.