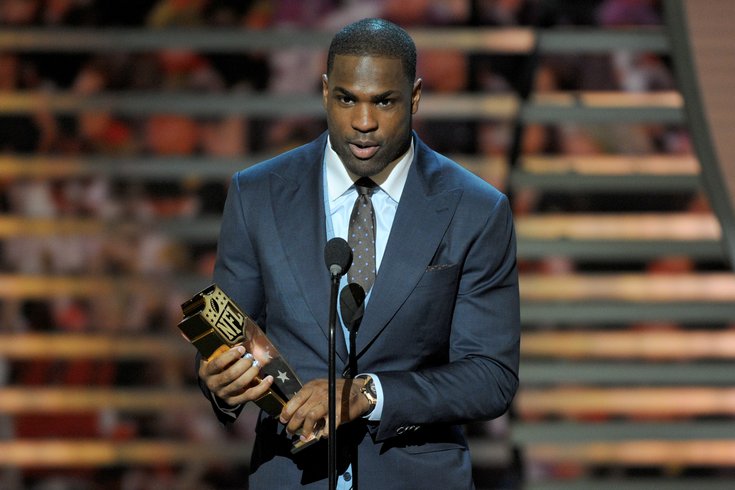 AP offensive player of the year DeMarco Murray is the 5th highest paid RB in the NFL, which is too much, apparently.

According to Mike Sando of ESPN, two of the players the Eagles signed in free agency were among the top 10 worst value deals in the NFL. They were CB Byron Maxwell, who Sando thinks received the second worst contract, and RB DeMarco Murray, who checked in as the sixth worst contract. Former Eagles LeSean McCoy and Jeremy Maclin also made the list, checking in at seventh and eighth, respectively. Sando does a great job, but I disagree strongly with one of his selections.

Maxwell signed a deal with $25 million fully guaranteed at signing even though he has played more than 13 games in a regular season just once since entering the league as a sixth-round pick in 2011. Teammate Richard Sherman has a higher annual average, but his deal carried $12.4 million fully guaranteed (Sherman had time remaining on his deal, whereas Maxwell benefited from a wild cornerback market). How will Maxwell fare in a defense without the cast of playmakers he lined up with in Seattle?

Was Maxwell overpaid by the Eagles? In my opinion, unquestionably yes. So I do agree with Sando here. However, the Eagles didn't have much of a choice. They had the 32nd ranked pass defense in 2013, and the 31st ranked pass D in 2014. They also gave up the 3rd most pass plays of 20+ yards in NFL history a year ago. Maxwell fits the profile of corner the Eagles like, in that he's 6'1 and physical. He also doesn't gave up many big plays.

The concerns that Maxwell benefited from good players around him in the secondary are fair, and one that we broached back in January with the help of Seahawks writer Danny Kelly.

The main tenet for Pete Carroll’s system is to not get beat over the top, and Maxwell is fundamentally sound in that area. In fact, the only time off the top of my head that I can remember him getting beat deep was in last year’s Arizona matchup in Week 16, where Michael Floyd made a miraculous catch in the back corner of the end zone even after Maxwell had gotten a hand on the pass and deflected it. So, he does his job well, and that’s evidenced by Seattle’s second straight season giving up the fewest passing yards in the NFL. Obviously, Kam Chancellor, Earl Thomas, and Richard Sherman had a big part in that, but at the same time, because those three players are so dominant, Maxwell does get a lot of action coming his way, and it doesn’t seem to faze him. He only gave up one touchdown this season, is generally very good at closing and tackling quickly (the Seahawks play everything deep, so underneath routes are often conceded), and is fast, and tough.

In Dallas, Murray essentially had one highly productive season running behind arguably the NFL's best offensive line. He missed 11 games over the previous three seasons. Murray gets a $5 million signing bonus and another $13 million in fully guaranteed salary stretching into the third year of the deal.

This is where I disagree with Sando. While the Cowboys' offensive line was great in the run game a year ago, Murray produced behind other Cowboys offensive lines that weren't anywhere near as good:

The popular notion that Murray's great season was solely the product of a great Cowboys' offensive line is flawed.

Murray didn't just have "one highly productive season." In 2013, he carried the ball 217 times for 1121 yards (5.2 yards per carry), and 9 TDs. Additionally, in that one highly productive season in 2014, Murray led the NFL in rushing by a margin of almost 500 yards. Therefore, I object to the number of "highly's" attributed to Murray's 2014 season. There should be at least two. Maybe three.

According to OverTheCap.com, Murray is the 5th highest paid running back in the NFL. That's not out-of-control spending. Considering Murray was a huge factor in the Cowboys' 12 win season, it hardly feels like his contract was the sixth worst in the NFL during the free agency period.