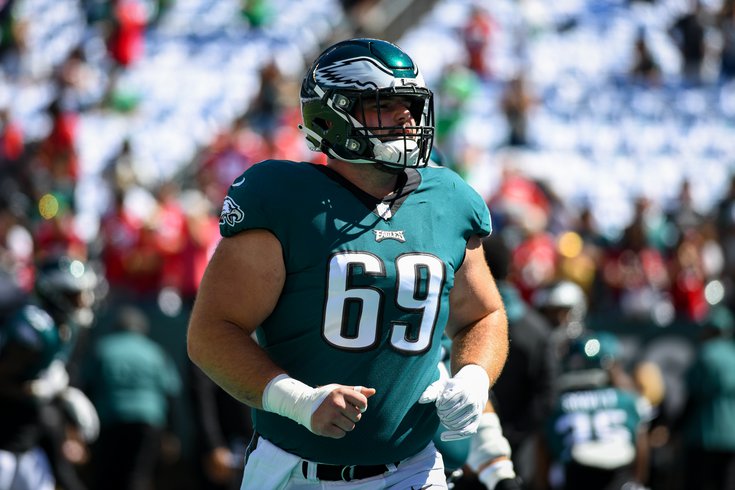 Over the next three or so weeks (basically whenever there isn't other news to cover), we'll take a look at every player on the Philadelphia Eagles' roster, and how they fit with the team heading into training camp. Today we'll look at the guards.

Dickerson tore an ACL in the SEC Championship Game in December of 2020, and he missed the entirety of 2021 Eagles training camp as a rookie. He wasn't activated from the PUP/NFI list until August 30, fewer than two weeks before the start of the regular season.

He was thrown to the wolves Week 2 against a tough San Francisco 49ers defense after Brandon Brooks went down with a pectoral injury. Dickerson had some early struggles, as should have been expected, but as the season continued he became a good starter, playing both at RG and LG.

In the back half of the season, Dickerson combined with Jordan Mailata on the left side to form a bulldozing duo that helped make the Eagles the No. 1 rushing offense in the NFL.

Had Dickerson not been saddled with a laundry list of injuries, he very likely would have been a first-round pick in the 2021 NFL Draft. He has that kind of ability, when healthy. Heading into his second season in the NFL, Dickerson has been on the field instead of in the trainer's room. During the 2022 season, he will be thinking more about dominating than he was as a rookie, when he was really just trying to recover from injury and survive on the field.

Dickerson will still have to prove that he can remain healthy for multiple seasons, but he got out to a great start in 2021, and the early returns on his selection are good as he is already the top guard on the roster.

Seumalo suffered a Lisfranc injury and was carted off against the Cowboys Week 3. He had surgery, and his season was over.

Seumalo is a solid starting guard, but he has added value as a lineman who can play all three interior line spots. However, he has been unable to consistently stay on the field over the last two seasons, as he also missed seven games in 2020 on injured reserve with a knee injury, and a large chunk of training camp in 2021 with a hamstring injury.

Heading into 2022, if Seumalo is to retain a starting job, he will be flipping to the right side of the line so the Eagles can keep the Mailata-Dickerson tandem in place. It's maybe not a given that Seumalo will start at RG in 2022, with Jack Driscoll having also shown legitimate starting ability, though Driscoll has also been injury prone.

Seumalo has six years of NFL experience and he is in the final year of his second NFL contract, but he is still relatively young at 28 years of age (he turns 29 in October). It will be interesting to see if the team has interest in doing a third contract with him, or if they're ready to give some of the younger guys listed below starting opportunities in 2023 and beyond. It's a sneaky important camp for him.

Like Seumalo, Driscoll has proven to be a competent and versatile starter, but he has not been able to stay healthy. In 2021, he suffered a high ankle sprain in November against the Giants, went on IR for the second time in one season, and his year was over. His 2020 season was cut short by an MCL injury.

Driscoll showed promise as a rookie in 2020, and in 2021 he was a valuable player for the Eagles until he got hurt, initially filling in for Lane Johnson at RT, and later at RG in relief of Brandon Brooks.

Driscoll will eventually have to prove that he can stay on the field before the Eagles can reasonably trust him to be a starter, but for now he's a valuable backup who can play multiple positions.

Over the last two seasons, Opeta has started five games, including a start in the Eagles' playoff loss to the Buccaneers. In those games, Opeta has had difficult blocking assignments. In his two starts in 2020, both against the Giants, he mainly saw Leonard Williams, who had 11.5 sacks that year.

We did a deep dive on Opeta for the second straight offseason a few weeks ago, and once again, I really liked what I saw from him.

Opeta could be an important player for the Eagles in 2022 because he could be in line to move up into Nate Herbig's role as an interior lineman off the bench who can play both sides. Herbig has been a third stringer in each of the last two seasons, but he has played a lot of snaps. In fact, in 2020 and 2021 combined, Herbig played 1,493 snaps, third-most among Eagles offensive linemen. Opeta, even further down the depth chart, has played 394 snaps the last two seasons:

In my opinion, Opeta is better than Herbig. He is highly likely to make the team and play meaningful snaps once again in 2022.

Awosika was a 2021 undrafted free agent who showed some ability in camp, but did not crack the initial 53-man roster. He spent the season on the practice squad, getting activations for the Eagles' Week 17 and 18 games. When Brett Toth got injured in the Week 18 game against the Cowboys, Awosika filled in at RG. I did not watch him specifically in that game, but in watching Le'Raven Clark, Jack Anderson, and Andre Dillard in that game, I peripherally noticed Awosika struggling a bit in pass pro.

Awosika has four players ahead of him at guard, plus some backup centers who can also play guard, so it will be an uphill climb for him to make the roster. He'll also have to fend off 2022 UDFAs Josh Sills and Bill Dunkle (below) for further development on the practice squad.

Sills has been a starter since 2017, initially with West Virginia before transferring to Oklahoma State. While he mostly played guard in college (both at LG and RG), it's easy to see why the Eagles had interest, via Dane Brugler:

Sills is one of the few players in this draft class with college starting experience at all five offensive line spots, but he must play with better control to counterbalance his aggression.

The Eagles love them some OL versatility. Sills is thought of as a physical, body-moving run blocker who needs work in pass pro.

My apologies, but I cannot claim to have gotten my fill of Billy Dunks tape, so we'll let Lance Zierlein of NFL.com do the heavy lifting here:

Aggressive guard with broad, powerful frame but limited upside. Dunkle lacks the desired range as a run blocker and in his pass sets. He has decent knock-back pop in the early stages of the block but struggles to close the distance and consistently stay connected as a man blocker. Pass protection might be a bigger concern due to imbalance when asked to mirror counters and control the air space from gap to gap. Athletic opponents will cause him to struggle, but his size, strength and toughness give him a shot to find future starting reps even though his grade and tape is more in line with a backup role.

Top 5 name on the roster.