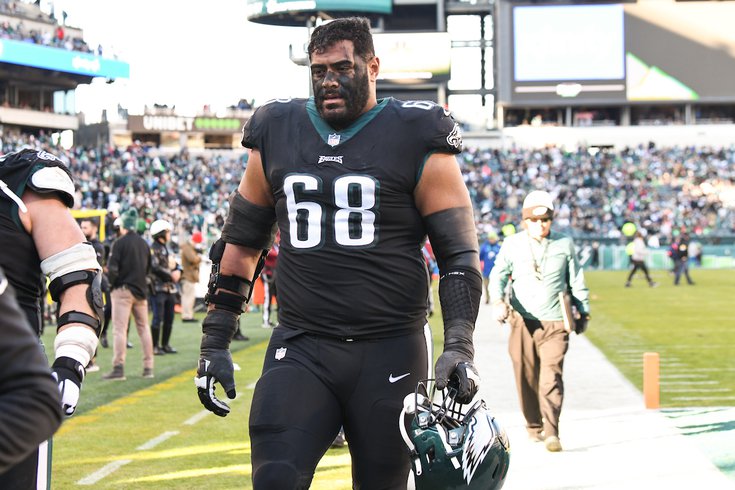 Over the next couple of weeks (basically whenever there isn't other news to cover), we'll take a look at every player on the Philadelphia Eagles' roster, and how they fit with the team heading into training camp. Today we'll look at the offensive tackles.

In 2020, Mailata got his first ever playing time in real NFL games, playing in 13 games, starting 10. It was fun to watch his improvement throughout the season as his confidence grew.

Mailata entered 2021 training camp in a competition with Andre Dillard for the starting LT job, but it was crystal clear after only a small handful of practices that Mailata was going to run away with the job. He was so good in camp, in fact, that the Eagles gave him a four-year contract extension worth $64 million. That contract now looks like a major bargain.

During the regular season, Mailata became one of the best left tackles in the NFL, and probably should have made the Pro Bowl, but was snubbed. On the season, we had Mailata down for 3.5 sacks allowed after he allowed 7 in 2020. He was always an aggressive mauler in the run game, but his pass protection has also come a long way. Mailata continues to get better, and he probably hasn't even come close to reaching his full potential, which is a scary thought for NFC East edge rushers.

Oh, and he's also one of the more fun personalities on the team, and already a near-unanimous fan favorite.

Johnson missed three games early in the season with a personal matter later revealed to be a battle with anxiety. He rebounded and had a dominant All-Pro season at RT.

Back in May, we assigned blame for each of the 32 Eagles sacks allowed in 2021. Johnson indeed had a stellar season, only allowing (by our judgment) 0.5 sacks, just as he did a year ago. Technically, we dinged both Johnson and Mailata for a half sack each on one play in which both players got beaten soundly. The defender who beat Mailata just happened to get to Hurts first, so if you were to let Johnson off the hook on that technicality, he gave up zero sacks.

The concern with Johnson entering the 2021 season was his ankle, which has hampered him since he injured it in London against the Jaguars way back in 2018. He had offseason surgery on it, and it seemed to hold up for him throughout the 2021 season, though it will likely continue to be a nuisance for him the rest of his career.

Dillard started five games at LT in 2021 (two in relief of an injured Mailata, two when Lane Johnson was out with his personal issue, and the meaningless Week 18 game against the Cowboys). It has just sort of been accepted as truth that Dillard played well whenever he was called upon to fill in. I was curious to take a closer look, however, so I took a comprehensive look at Dillard's 2021 season in June.

He got out to a great start, filling in for an injured Mailata against the Cowboys Week 3. We reviewed this game by Dillard during the 2021 season, and gave him high marks. It remains the best game of his career. I also thought he had a solid game Week 5 against the Panthers, working against speed rushers like Brian Burns and Haason Reddick.

However, he had poor performances against the Chiefs, Buccaneers, and Raiders, and he was up and down against the Cowboys in the meaningless Week 18 game against Dallas.

In summary, Dillard did not play as well in 2021 as I had originally perceived. It's also worth noting that in the Eagles' playoff game against the Buccaneers, Johnson went down with an injury and Le'Raven Clark filled in, not Dillard.

There isn't really a good fit for Dillard as a starter with the Eagles going forward. Mailata will be the starting LT for the foreseeable future, and Johnson is coming off an All-Pro season at RT. Dillard has shown so far in his career that he can only play LT, so he doesn't really even have value to the Eagles as a swing tackle.

Offensive line depth is kind of a big deal in the NFL, though, as we have seen with this Eagles team, and who knows — the 2022 Eagles could maybe be contenders. If they almost certainly weren't, it would be an easy decision to take something like a fourth-round pick for Dillard. But the 2022 season has value, and thus, so does Dillard to this team, and the Eagles shouldn't be quick to trade him, even with his many glaring flaws. After all, it's not as if the Eagles have an obviously good answer at tackle on their bench otherwise.

Dillard had an absolutely brutal training camp in 2021, when he had a chance to win a starting job over Mailata. He received 12 "stock down" votes in our yearly media poll. The next closest player, Jalen Reagor, got four votes. Dillard cannot go out and have another camp like the one he had a year ago.

Clark was a third-round pick of the Colts in the 2016 NFL Draft. He appeared in 47 games in Indy, starting 15. Clark has guard-tackle versatility, as he started games for the Colts at LT, RT, and RG. He has average athletic testing measurables, but excellent length, notably his 36-plus inch arms.

Clark tore his Achilles in early December 2020. He missed a chunk of 2021 training camp but was activated from the PUP list in mid-August. He was released at 53-man cutdowns, but signed back to the practice squad, where he remained for most of the season.

In December, the Eagles elevated Clark to the 53-man roster and signed him to a one-year contract extension. He started in the practice squad game against the Cowboys Week 18, and as noted above he filled in for an injured Johnson instead of Dillard against the Bucs in garbage time in the playoffs.

I was curious watch Clark's 2021 game tape to see if the Eagles could feel comfortable trading Dillard if the right offer came along. And so we took a deep dive look at Clark's season. The Cliff's Notes:

• Pass protection: Clark can anchor against power, however, he had major issues with speed rushers. If he has to play on the edge against a premium speed rusher, you have to give him help. You do not want him on an island against anyone with speed or quickness.

• Run blocking: Generally speaking, Clark is a good run blocker. He has some power to move opposing defenders against their will, and when he knows where he is going pre-snap, he exhibits a little explosiveness to beat defenders to a spot and then seal them off. It's when he has to be reactive to defenders — and this applies to pass protection as well — when he looks slow, oftentimes with clunky feet.

• Screen game: Clark won't remind anyone of Jason Peters in his prime running out in front of screens, but he is effective enough and seems willing to lay out defenders if given the opportunity.

In other words, he is pretty much Bizarro Dillard.

Clark has some guard/tackle versatility, but I like him better as a guard, as I would not want him playing on the edge against anyone with speed. Given that major deficiency in his game, I would not feel comfortable trading Dillard at a discount on the premise that Clark can do just as good a job in a backup tackle role. I do think he showed enough positives that he is likely to make the team out of training camp as a backup lineman.

Toth has mostly played at offensive tackle for the Eagles, but interestingly, he played center in the Eagles' meaningless Week 18 game against Dallas last season. One might conclude that he got plenty of work at center during the season in practice, or they wouldn't have played him there. Maybe Jeff Stoutland sees something in Toth as a center?

Toth has appeared in nine games in the Eagles' regular offense over the last two years, despite being a fringe roster guy who has ping-ponged back and forth between the Eagles and Cardinals. In the meaningless game against the Cowboys noted above, Toth tore an ACL. We reported on Monday that he will begin camp on the PUP list.

I cannot claim to have ever seen Williams play. Tommy watched him, and he seems to think Williams is a player worth developing.

Williams began his career at Houston and then transferred to Miami. He started at RT for both schools. Williams is an agile, athletic blocker. He ran 5.16 in the 40 and had a vertical of 31 inches. That shows up on tape, not just workouts. The Eagles aren’t set at RT behind Lane Johnson. Williams has a chance to earn a roster spot if he plays well. He could also be a good developmental prospect, spending 2022 on the practice squad and then competing for a spot in 2023. Williams must learn to use his hands more consistently. His pad level can also be an issue at times. He has good tools to work with, but definitely needs work.