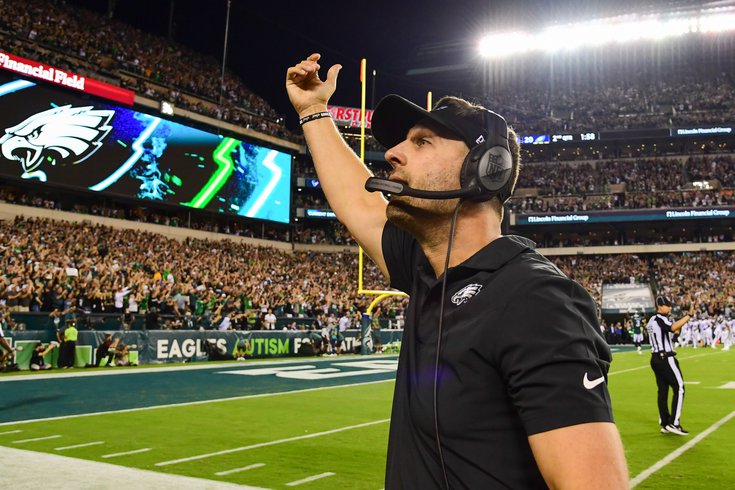 Recently the surviving members of the 1972 Miami Dolphins, the NFL’s only “perfect team” did their annual get-together with the South Florida media to reminisce about a standard that has not been matched in the subsequent 50 years of the league.

The Eagles are the last left on that unbeaten island of relevancy in 2022 with seven and counting after an impressive 35-13 drubbing over the Pittsburgh Steelers on Sunday.

Wait a few days and you’ll likely see 8-0 after Philadelphia disposes of the moribund Houston Texans on “Thursday Night Football.”

From there, many hurdles will remain.

Things are tougher in the modern era with 14 games those Dolphins had in the regular season turning to 17, meaning the Miami standard of 17-0 half a century ago would need to be 20-0 for Philadelphia to reach the Curt Hennig level of this video game (that’s Mr. Perfect for the non-pro wrestling audience).

The Eagles, of course, particularly Nick Sirianni and Jalen Hurts, often bring up their own nebulous standard that has never been defined other than to say the team hasn’t reached it.

The self-scout of the bye week allowed the coaching staff to step back a bit and nitpick. For me, it would be about sustaining but for a profession defined by competitiveness and optimism, Sirianni and his coaches came up with eight areas that could use improvement.

Some are obvious to the most casual of observers like tightening up the special teams' hiccups (Pittsburgh converted a fake punt on Sunday), generating more offense in the second half (14 points vs. the Steelers so some improvement there), and cleaning up the tackling issues that have been far too prevalent (57 misses, nearly 10 per game coming in). At first glance, that seemed better against the 2-6 Steelers.

According to multiple team sources, the self-evaluation included some things that don't seem like concerns at all like getting Dallas Goedert more involved in third-down situations or further focusing on ball security.

The latter seems unlikely to get better because the Eagles haven’t lost a fumble in seven games now and Hurts has thrown two interceptions with only one of those being deemed as his mistake, the pick-six in terrible weather against Jacksonville.

Before Friday’s practice, assistant head coach/running backs Jemal Singleton was shaking his hands like a heavyweight boxer that just went the distance in the slugfest.

For those who don’t know Singleton, a tough-minded Air Force product, often punches at the football wearing boxing gloves during ball-security drills with wild abandon. And he’s been doing it since training camp so he’s feeling it.

There is a certain randomness to turnovers in the NFL and, as one of the more analytically-driven organizations, the Eagles realize a regression to the mean lays around the bend but that doesn’t mean you can’t stay ahead of the competition contextually with more attention to detail.

Against the Steelers, it was one pick and one fumble recovery with a clean sheet that would make the Philadelphia Union blush for the offense, moving the Eagles to plus-14 on the season in the most important double-positive of them all.

Few believe the Eagles can make a run at those 1972 Dolphins just yet and Sirianni doesn’t want to hear about it, always preaching to stay in the moment.

Perhaps, if Philadelphia can reach its lofty standard of winning every day during every week, perfection may be the end game with an even bigger carrot will be at the end of the stick, the Lombardi Trophy.

The next step would be winning another.

And ultimately, that’s the secret of “the standard.” The goal isn’t the accomplishment.

John McMullen is a contributor to PhillyVoice.com and covers the Eagles and the NFL for Sports Illustrated and JAKIB Sports. He’s also the co-host of “Birds 365,” a daily streaming show covering the Eagles and the NFL, and the host of “Extending the Play” on AM1490 in South Jersey. You can reach him at jmcmullen44@gmail.com. Follow John on Twitter: @JFMcMullen