Brown was scheduled to hold a youth camp in Nashville, but canceled his appearance after the Eagles trade 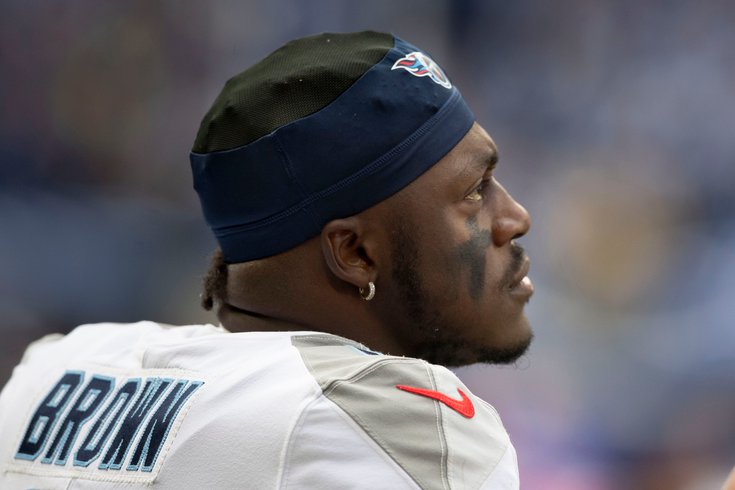 Eagles receiver A.J. Brown when he was still with the Titans.

This one falls on the uglier side of football in the social media age.

New Eagle A.J. Brown pulled out of a youth football camp he was scheduled to hold in his former home of Nashville on June 18, citing harassment concerns he feared would carry over from Instagram and Twitter into real life.

Wrote Brown in a statement he posted Friday afternoon:

"I'm so sorry I let down your kids and many others but I will not put myself in a place where my peace is going to be threatened by adults who feel a way because I was traded. I'm every bad word it is for taking care of MY FAMILY! If you're not aware, just look on social media.

"I would love to make everyone's children's day, but not if I'm putting my own at risk. Please say 'nothing is going to happen' because nobody knows that. I'm sure someone will still have a problem with this and that's fine as well. If you can't understand that then it's because you don't want to." [A.J. Brown / Twitter]

Brown's youth camp was launched while he was still a member of the Tennessee Titans, and was set to host boys and girls from grades 1-8 from around the area. His appearance was canceled after the draft night trade to the Eagles, though it isn't clear if the camp itself was outright canceled too.

Suspicion is that Titans star running back Derrick Henry will take his place, based on a tweet from Brown that he deleted earlier in the month and correspondence from Montgomery Bell Academy — the camp's site — with Nashville's local news.

I spoke to MBA's AD Mark Tipps this afternoon (where AJ Brown's camp was going to be held on June 18th) & they have not been told by anyone that the camp has been canceled, so like @1kalwaysopen_ said it sounds like a #Titans replacement should be announced soon, possibly Henry.

As Bleacher Report notes, Brown's 7-on-7 camp in his hometown of Starkville, Miss. still appears to be on for June 11. So it's shame that Tennessee appears to be off-limits after he made a name for himself as a pro with the Titans.

Free your calendar, you’re not going to want to miss this 🔥 pic.twitter.com/fSMhb0lo46

Just bitter feelings and the uglier side of football, unfortunately.