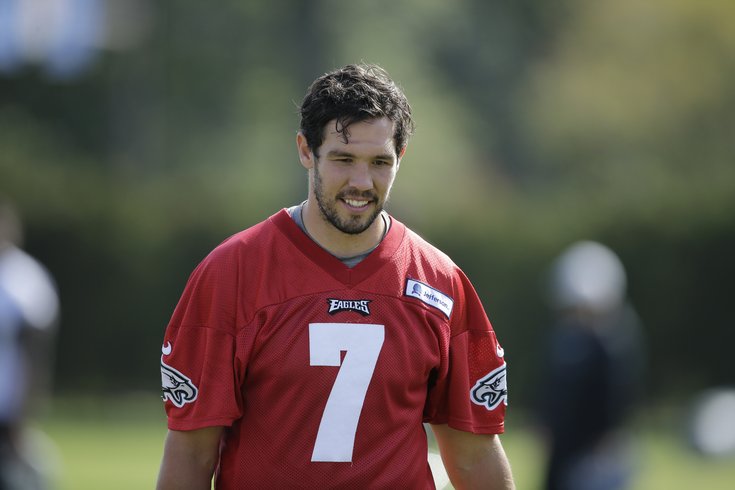 UPDATE [1:40 p.m.] -- Eagles tackle Lane Johnson told reporters in the locker room after practice on Monday that injured quarterback Sam Bradford (concussion, shoulder) was limited to individual drills and did not participate in any of the team drills.

That likely means Bradford is still in Phase 4 of the NFL's concussion protocol, although we still have no way of being certain, since Chip Kelly didn't give an update on his status. Furthermore, the team has not disclosed the severity of the left shoulder injury Bradford suffered against the Dolphins, so there's a chance that could be a factor as well -- however, it seemed to be fine during the portion of practice open to the media.

Whether or not he starts against the Lions on Thursday still remains very much up in the air, as Johnson went on to say that he believes backup Mark Sanchez will make his second-straight start for the Eagles on Thursday.

Lane Johnson, when asked if he had to guess who would start at QB on Thursday, said Mark Sanchez. #Eagles

Philadelphia Eagles head coach Chip Kelly has been steadfast all season long in his refusal to give injury updates at his weekly day-after-game press conferences.

That continued Monday, as Kelly refused to offer up whether starting quarterback Sam Bradford (concussion, shoulder) had been cleared to return to practice.

Typically, Kelly is asked about injuries sustained on the field a day earlier, and his excuse has always been that he doesn't talk to the trainers until after he meets with the media.

This time, however, his reasoning was different.

"We'll see what happens when [Bradford] goes out on the field," Kelly said when asked if Bradford, who missed Sunday's loss after suffering a concussion and shoulder injury a week earlier against the Dolphins. "I'm done with the updates. You'll see him on the field and you guys can get it done. I gave you an update last week, and I was wrong. I don't want to be wrong again."

Kelly was pressed on the question -- and rightfully so -- but he didn't budge.

"We'll see what he can do on the field today," the coach added.

When practice began, Bradford was out there with his teammates and didn't look limited as he took part in both individual drills and working with the running backs during the sessions that were open to the media.

Sam Bradford has a helmet on and is warming up... pic.twitter.com/vOtGVsjMk5

The fact that Bradford had a helmet on was a good sign, although because the head coach didn't give us an injury update, we have no way of knowing just how far along he is in the NFL's concussion protocol. At the very least, he must be in at least Phase 4, which is the first time a player is allowed to resume football activities, including catching and throwing.

And on Monday, he was doing just that for the first time since his injury.

What isn't clear, however, is whether or not the Eagles quarterback has moved on passed that. Once you pass Phase 4, you're allowed to return to all football activities and are considered "cleared" to return to contact drills and, ultimately, game action. But because quarterbacks where those bright red jerseys at practice, Bradford isn't likely to experience any contact anyway, so he could potentially still be going through the protocol.

The good news is, we shouldn't have to wait too long to find out his status for the upcoming game against the Detroit Lions. The short week means we'll be getting an injury report earlier than usual -- the first one isn't typically sent out until Wednesday.

Through eight-plus games this season, the former Heisman winner has completed 63.9 percent of his passes for 2,297 yards, 11 TDs and 10 INTs (82.4 passer rating). And while his team is just 4-5 in the games he's started, Bradford had been playing much better recently after getting off to a rough start. Backup Mark Sanchez threw three interceptions while starting in his place, so a return to the lineup can't come soon enough -- even if Bradford has been underwhelming, for the most part, this season.