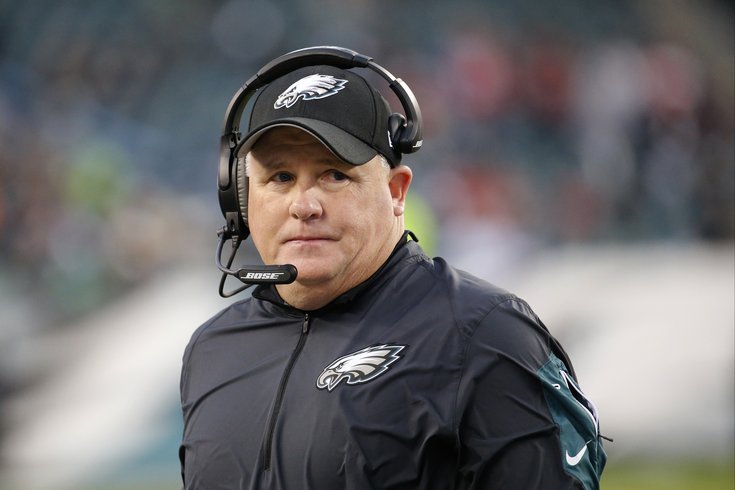 That was the word safety Malcolm Jenkins used to describe the mood in the Philadelphia Eagles locker room following their 45-17 loss to the Tampa Bay Buccaneers.

"I think that after this game, it’s just embarrassment," he added. "Guys are always upset when we’re losing, but to come out and play in the fashion that we did is just unacceptable.”

It was a sentiment echoed by several players, and that shouldn’t come as a surprise after seeing Jenkins lay into his teammates on the field and Mark Sanchez get into it with Darren Sproles following the quarterback’s third interception of the day.

"There are a lot of frustrated guys in here," tackle Lane Johnson said in the locker room. "I am one of them. I think I speak for the team, I am just very frustrated right now.”

Apparently, it wasn't lost on the coaching staff.

Defensive coordinator Bill Davis said he didn't see the specific argument between Jenkins and some of the other defensive players, but he wasn't surprised.

"Everyone was fighting at the end," he said. "They’re a bunch of prideful men and they were embarrassed.”

For the second week in a row -- albeit with a different quarterback under center -- the Eagles got out to an early lead. Unlike in their Week 10 loss to the Miami Dolphins, however, they didn't wait until the second half to let this one slip away.

Another difference was the final score; losing by 28 points and losing by one point are hardly the same thing.

“I think everybody understands how bad that was," linebacker Connor Barwin said. "Just look at the score. We played them at home and they beat us by 30. It was bad all around. It was very disappointing and very embarrassing."

And as the game began to get out of hand in the second half, it looked as though Chip Kelly was beginning to lose control of his team. After all, this is the type of loss that can leave a team second-guessing its leader.

Kelly, however, said the loss to the Bucs had little to do with players losing faith in his system.

"I don't think anybody played well today, and I don't think we're talking about beliefs," he said. "We just didn't play well as a football team in any facet of the game and there's no excuse for that."

When asked to explain his team's poor performance, the third year coach said what you would expect him to say -- I won’t know until I see the film, but "we didn't make plays when we had to make plays" -- and then went on to talk about the third-and-long conversions and the fact that Doug Martin ran for 235 yards while rookie Jameis Winston threw for five touchdowns.

In short, Kelly didn't know why his team looked so outmatched Sunday. But he did have a message for his players.

"So we all take ownership; we all take responsibility. Every single person in that room contributed to that loss and contributed to the outcome of that football game. [So I told the guys], ‘Go get some sleep, turn around and we'll see you guys tomorrow morning at eight.’”

The question now is this: Will Kelly’s players heed his message or, after falling to 4-6 in humiliating fashion, will his words fall on deaf ears?

Judging by what the players had to say in the locker room after the game, they know who is at fault for the loss.

It was a particular bad day for the defense. They allowed the Bucs to rush for 283 yards, the most surrendered by an Eagles defense since the Cowboys ran for 286 yards back in 1973 - and the most they've allowed at home since 1962 (Packers, 294 yards). Running back Doug Martin briefly broke the record for most rushing yards against the Eagles in a game (237 — Emmitt Smith, Jim Brown), only to see it slip away after a pair of negative plays late in the game. He finished with 235 yards, the 14th-best single-game performance in NFL history, and just 16 yards shy of his career high of 251 yards.

Through the air, they allowed five passing touchdowns for the first time since 2012 (Eli Manning) and just the third time since 1972. In doing so, they allowed Jameis Winston to tie Matthew Stafford (2009) for the most passing TDs by a rookie in a game.

"Everyone is looking at themselves," said Barwin. "No one is pointing any fingers. Everyone made mistakes and didn’t make plays when there were plays to be made. This is what happens when you don’t do that.”

As for their coach, they still have his back.

“With games like this, I never look at Chip," Jenkins said when asked how much blame Kelly should get for the defense's poor performance. "He never steps into a defensive meeting and he has nothing to do with stopping the run. We’ll never put Chip Kelly in pull technique and ask him to two-gap.

"This is completely on us as a defense. When it comes down to the offense, Chip is the face of that so we can let him wear that hat. As far as what we did defensively today, he’s the head coach so he’ll get blamed, but he has nothing to do with that."

That's precisely what you want to hear out of a veteran leader, especially one who was seen yelling at his teammates on the sideline late in the game. But Jenkins wasn't alone in his endorsement of Kelly; one of the leaders on offense went to bat for his coach as well.

“Of course [we still believe in Kelly]," said veteran tackle Jason Peters, who was lifted late in the blowout loss as a precaution while he continues to recover from a back injury. "He’s the head coach. There isn’t any quit in us around here. We’re going to fight until the end whether it’s a win or a loss.”

For the second straight week, however, it was a loss. And now, the Eagles are two games under .500 for the first time since they fell to 1-3 following their Week 4 loss at Washington.

“We are what our record says we are," Jenkins added. "Let’s not get that twisted now; who we believe we are -- as individuals and as a team -- is yet to be defined until the season is over. But you are what you put on tape every week.

"A lot of us are going to have to turn on the tape and watch that and swallow that pill. The good thing is that we can always change that next week and obviously we get a game that is a lot closer than next Sunday.

"I think we’ll look forward to putting something different out there.”

They had better because another loss on Thursday to the Detroit Lions and Kelly could find himself without any supporters outside the NovaCare Complex, even if the players still believe.