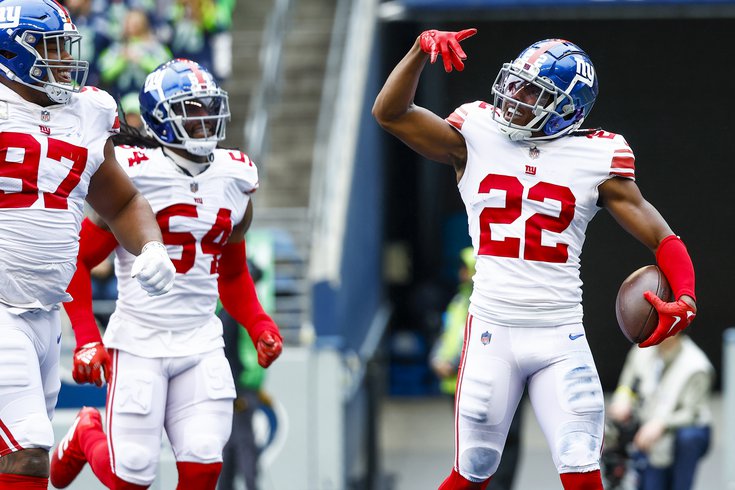 Adoree Jackson (22) is the Giants' best cornerback. His status for Sunday is uncertain.

The Philadelphia Eagles have recently gotten two important players back in CB Avonte Maddox and DT Jordan Davis. TE Dallas Goedert is on deck. Relative to other teams around the league at this point in the season, the Birds are a healthy team. The Giants... not so much. They have major injury concerns at wide receiver, in their secondary, and along their defensive line.

• Watkins suffered an AC joint sprain against the Titans. His limited participation is a good sign for his availability for Sunday.

• Bradley is out. Everyone else is good to go.

• TE Dallas Goedert (IR - Week 11): Goedert has 43 receptions for 533 yards and 3 TDs, and has been one of the most efficient pass catchers in the NFL the last two seasons, in addition to his above average blocking skills. He is a top five type of tight end with no obvious flaws in his game who rarely comes off the field. The Eagles have missed Goedert in their three games without him, as there has been a pretty obvious dropoff from him to the trio of Jack Stoll, Grant Calcaterra, and Tyree Jackson, as expected, though Stoll and Calcaterra contributed to the win over the Titans on Sunday. Goedert is eligible for return next week.

• S Chauncey Gardner-Johnson (Week 13): Gardner-Johnson lacerated a kidney in the Eagles' win over the Green Bay Packers. He will miss a minimum of three more games (at Giants, at Bears, at Cowboys), after missing the Eagles' win over the Titans last Sunday. Last week we spoke with a urologist, who explained the unpredictability in pinning down precise timelines for recovery from kidney injuries. The Eagles evidently felt that Gardner-Johnson would not be healed in time for the team's trip to Dallas on Christmas Eve.

Undrafted rookie Reed Blankenship filled in for Gardner-Johnson against the Packers. He showed some good, and some bad (more good than bad) in that game, in case you missed our breakdown of him last week. He also had a solid game against the Titans.

• DE Robert Quinn (IR - Week 14): The Eagles traded a fourth-round pick for Quinn at the trade deadline, hoping that he could add some juice to their pass rush in a role reminiscent of Chris Long's in 2017, or Ryan Kerrigan's in 2021. So far he's been more like Kerrigan than Long, as he has just 2 tackles and 2 QB hits with no sacks in five games.

• Jackson is the Giants' best cornerback, and he has missed the Giants' last two games. Starting out with a DNP is a bad sign for the Giants. Add in that Holmes and McCloud are also banged up, and that Week 1 starter Aaron Robinson is on IR, and the Giants could struggle stopping A.J. Brown and DeVonta Smith.

• Williams' neck issue landed him on the injury report a week ago, but he was at least a limited participant every day. His DNP should be concerning.

• There were no improvements to any of the players on the Giants' injury report, and Saquon Barkley was added as a limited participant with a neck injury.

• Jackson is out, as expected. The Giants are paper thin at cornerback.

• The Giants are also super thin along their defensive line, with Williams likely out.

• Barkley's status will be worth watching over the next couple of days.

• OG Ben Bredeson (IR - DFR): Bredeson started the first seven games for the Giants at LG. The Giants activated his 21-day window for return last week, but he has not yet been elevated from IR.

• DT D.J. Davidson (IR): Rotational DT. Only noteworthy because of the other Giants defensive line injuries.

• S Xavier McKinney (NFI): McKinney is one of the Giants' starting safeties. He injured his hand in Cabo during the Giants' bye week, and has missed the last four games. He is currently on the non-football injury list.