Five over/unders for Eagles vs. Giants 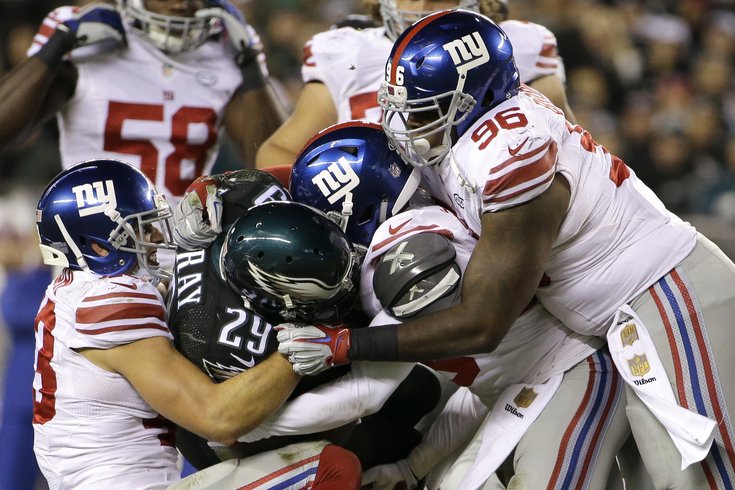 As you all know -- because you lived through it for 365 long days -- 2015 was a historically bad year for Philly sports. When all was said and done, the average winning percentage of the four major pro teams in this city came out to a whopping .350, making it the worst calendar year since 1972 and the second-worst in the 48 years since the Flyers arrived on scene.

Furthermore, three of the four teams replaced their coaches/managers this year. Gone are Craig Berube, Ryne Sandberg and, most recently, Chip Kelly. There have also been big changes made in the various front offices as well, from Andy MacPhail and Matt Klentak to Jerry Colangelo to the return of Howie Roseman from wherever he had been hiding out in NovaCare for the last year.

Currently, it may not feel this way, but it wasn’t that long ago that Philly was on top — or at least near the top — of the sports world.

In January of 2009, the Eagles played for an NFC title — a game they lost to the Cardinals — just a few months after the Phillies won the World Series. The Flyers were still perennial contenders and were a year away from making an improbable run to the Stanley Cup Final. The Sixers were in a stretch of four playoff appearances in five years, which concluded with them falling one win short of the Eastern Conference Finals in 2012.

But at some point along the way, the sports gods decided they had enough fun with our city. Instead of the winning ways they had suddenly become accustomed to during that span, Philly fans were left with a 102-win Phillies team that failed to get out of the first round of the playoffs, the Andrew Bynum signing that ultimately paved the way for “The Process,” the Eagles’ Dream Team debacle, and, of course, the Ilya Bryzgalov experiment. And that’s only our starting point; it gets much worse from here.

It's gotten so strange, in fact, that we've arrived at Week 17 of the NFL season with the Eagles playing a game in which fans should be rooting for the Giants to come away victorious. And despite the fact the both teams have very little to play for and, in fact, could improve their chances next season by losing on Sunday, they're still going to play the game.

Here are some things to keep an eye on, in the form of five over/unders:

That's the current total being offered by topbet.eu. It's also the second-highest total in the league, behind only the Saints-Falcons game. That's somewhat surprising considering the Giants have averaged just 23.4 PPG over their last five and the Eagles have managed just 22.8 PPG over that span. And that's being generous to the Birds. If you take away the 21 points they scored on defense/special teams against the Patriots, their average drops to 18.6 PPG over their last five.

But then you look at their defenses. The Eagles have surrounded 36 PPG dating back to their Week 11 loss to the Bucs. In their five games since their bye, the Giants have allowed 30.8 PPG.

Suddenly, that 51.5 doesn't seem so unrealistic.

Murray led the team in carries last week against Washington, which came as a surprise to many after he seemed like a non-factor in Chip Kelly's offense the previous two weeks. And while Kelly is no longer here, his offense will likely remain for at least one more week, as will the guy who Kelly has told us actually decides which back is on the field at any given time -- running back coach Duce Staley.

It's hard to tell whether or not Shurmur's play-calling will be similar to what Kelly did prior to his ouster earlier this week, but since there's only one game left, it wouldn't be a surprise to see something that looks very similar to what we've seen from the Eagles to this point in the season. Still, I think you see a fairly balanced attack from the Eagles offense, one that looked similar to splits against Washington.

The main wildcard here is just how many plays the Eagles will run -- and how many of them will be rushing plays. Over their last four games, they have run the ball just 39 percent of the time, and that numbers been dropping each week since their win over New England, the last time they ran the ball more than they passed it.

In those four games, Murray has totaled just 26 carries (4.5/game) and has only hit double digits once. However, the last time the Eagles played the Giants, Murray had by far his best game of the season. He finished with 21 carries for 112 yards (5.33/carry) and a touchdown. It was also his only game of 100 yards or more all season; last year he ran for at least 100 yards in 12 of 16 games -- including in both matchups against the Giants.

I'm not sure he'll hit the century mark this time around, but he should finish with more carries than he's seen in recent weeks.

To be fair, Beckham was far from 100 percent that game and the Eagles defense had arguably their best showing of the season. This time around, the Eagles will be trotting out a patchwork secondary and facing Beckham at arguably the worst possible time -- coming off a suspension following an embarrassing performance against Josh Norman and the Panthers in Week 15.

The chip on his shoulder will probably be hard to miss.

Neither team runs the ball particularly well -- and both greatly struggle in pass coverage -- so it wouldn't be out of the question to see both wideouts targeted early and often. That being said, I just don't see them scoring more than once each. But I've been wrong before.

Neither team has anything left to play for, but considering that it may be Tom Couglin's last game coaching for the Giants.  You better believe he wants to end it on a high note, and god forbid someone who kicks a football for a living come between the coach's ruby red face and a meaningless win.

As you may have noticed, the Eagles are in a need of a new head coach. And by the time Monday rolls around, the Giants could be in the same boat. And since the actual outcome of the game means very little, expect a large portion of the broadcast to be dedicated to who the Eagles will tap to replace Chip Kelly.

If you're lucky, you may even get a graphic with names and resumes of potential replacements. Let the speculation begin!