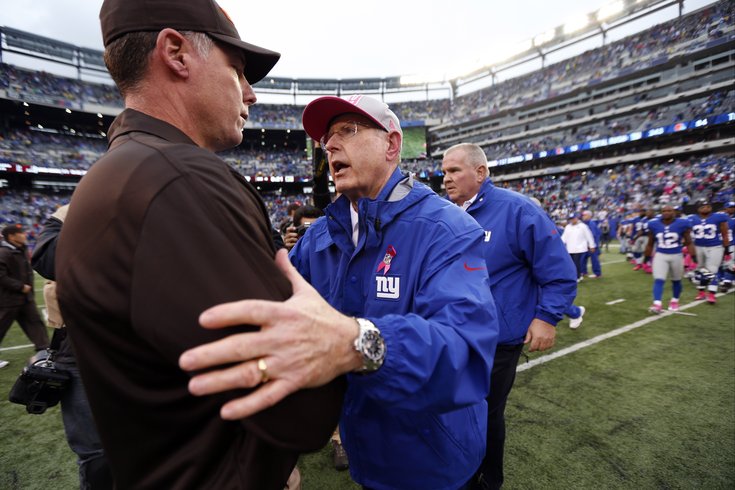 Pat Shurmur and Tom Coughlin have no incentive to tank.

Friends with any Giants fans? Maybe you should switch jerseys with them this week, because the winner of the Eagles-Giants game this Sunday will very much be the overall loser.

Before Chip Kelly was fired, we noted that the Eagles should take a page out of the Sixers' book and tank their final game. If the Eagles lose on Sunday, they will clinch a draft spot of 11th overall or better. They can draft as high as ninth overall depending on the outcomes of the Buccaneers and Saints games. If they win, however, they will draft no higher than 13th, and could draft as low as 17th.

After this dumpster fire of a season, if the Eagles wind up with just the 17th overall pick, that would be one more colossal disappointment.

Additionally, while Sam Bradford's future with the team is an uncertainty, if he, say, tears his ACL again, that could essentially eliminate him as an option in 2016. And then there's the schedule. If the Eagles win, they'd have to play on the road next season in Seattle against the powerhouse Seahawks. If they lose, they'd secure the third place schedule, which would mean a "road game" on a neutral field against the Rams in London.

And yet, both teams are going to try to win.

"We're going to do what we have to do to win the game," said Pat Shurmur in his first press conference as interim head coach. "Basically I just told the team that we're all very proud, competitive guys, men making a living. We're just coaching and playing a game that we've been playing since we were kids. It's very important to show respect for ourselves, for our teammates, for our organization, and for the game itself to go out and fight tooth and nail to beat the Giants.

Of course, no coach is ever going to say, "We're going to tank this game for a better draft pick."

However, Shurmur meant what he said. As an interim head coach who has almost no chance of landing the job full-time, Shurmur has no incentive whatsoever to lose for the benefits noted above.

"Let's win the last game of the 2015 season against a division foe." - Coach Coughlin

Coughlin is likely to be fired this offseason. You can be 100% sure he wants to end his tenure in New York with a W.