Five over/unders for the Eagles' preseason finale vs. Jets 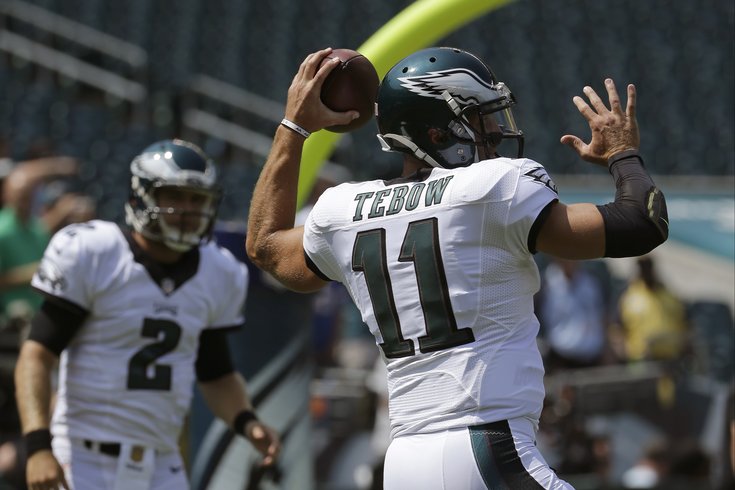 Tim Tebow, right, warms up as Matt Barkley looks on.

Welcome back to another (less exciting) week of Eagles' preseason over/unders! With several players, including most starters, likely to sit out in the final game, it's a slightly trimmed down version, but that doesn't mean there isn't plenty to keep an eye on.

We'll be doing this before every game this season, and even though it's the final game of the preseason -- and most starters won't play -- we're not going to be taking the week off. Remember, these aren't actual prop bets taken from a Vegas sportsbook; they're just my best guess on what will happen on the game based on what I've seen at practice and heard from coaches and players.

It's basically a what-to-watch-for post, but since Jimmy Kempski already has those on lock, think of this as the stick-figureless complement to his fine artwork.

As always, feel free to leave your predictions -- especially if you disagree with me -- in the comments (as well as post your own O/U prop bet ideas down there). Each week (of the regular season) when I post my new lines, I'll also give a shout out to the winner* from the previous week.

*You don't actually win anything. Sorry.

Here's a look at what to expect in Thursday night's Eagles-Jets game:

Will he play? Won't he play?

That's basically what this one comes down to. Alonso said Tuesday that he wants to play, but Chip Kelly wasn't ready to confirm that. The former defensive rookie of the year was also expected to play last week against the Packers, but was a late scratch due to tendinitis in his surgically repaired left knee. I'd like to see him out there, as he could use some reps before the season starts -- he hasn't played a game since December 2013 -- but I won't believe it 'til I see it.

Kelly admitted that a lot is riding on this game when it comes to his decision between Tebow and Matt Barkley for the No. 3 QB spot. Barkley will get the start, but Tebow will still likely play a half. Unfortunately for him, it will most likely be the second half, meaning Barkley will have the better skill players surrounding him.

So far this preseason, Tebow's completion percentage is 52.6, an improvement over his career percentage of 47.9. And with his job on the line, I actually have faith -- see what I did there? -- in Tebow completing 50 percent of passes against the Jets.

Basically, if you take the over, you're betting that Barkley will have more TDs than INTs. Take the under and you're betting against Barkley, that he will have as many INTs (or more) than TDs. So far this preseason, Barkley's yet to throw a touchdown, but did toss a pick in the team's first preseason game against the Colts, which was his best performance yet despite the INT.

One of the reasons I think he was most successful in that game was because of the players surrounding him. Because Sam Bradford didn't play -- both he and Mark Sanchez will sit out vs. the Jets -- Barkley was in with some of the No. 1s and mostly the twos. Sure, he was facing better competition on the other side of the ball, but with better skill guys, he was able to move the ball down the field, and finished the game 12-of-20 for 192 yards. And since he's likely going to play the entire first half, I want to take the over.

Kelly got Tebow fans all excited last week by trotting him out there twice to attempt a two-point conversion while the starters were still in the game. Neither, however, was successful.

But if Cody Parkey sits against Thursday night, there's no reason the coach won't give it another shot. After all, he didn't place the blame on Tebow for those two botched attempts, but rather pointed to missed blocks by the offensive line. And considering this is the last chance for Kelly to try this before finals cuts are made and the games actually count, I think he tries it at least once tonight, possibly while Tebow is already in a quarterback. Of course, that also assumes Tebow will lead the Eagles on a TD drive at some point.

Will it be successful? Who knows, but all he has to do is try.

I had this same line out there last week, and took the under. As it turned out, I was right. But that almost wasn't the case, as Raheem Mostert returned the opening kick 67-yards before being pushed out of bounds by kicker Mason Crosby.

Kenjon Barner had just one punt return last week -- for -2 yards -- and is also still trying to make the team after two return TDs in the first two games. It's always hard to bet on there actually being a return TD, but if there's one team you want lay your money on, it's the Eagles.