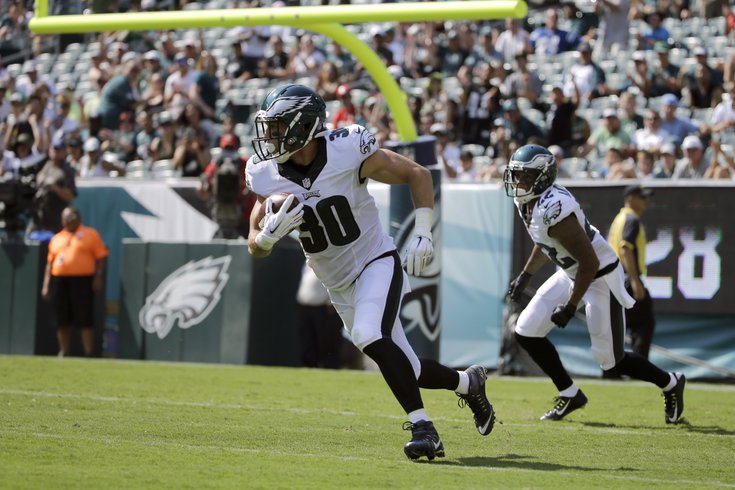 Ed Reynolds will battle it out to the finish with Jerome Couplin to see if either, or potentially neither guy will make the final 53 man roster. Week 4 preseason action!

The fourth and final preseason game is the least important of the preseason games, as it's really little more than one last look at potential back of the roster players. As usual, the Eagles will face the Jets in the Super-Meaningless Bowl. Still, there are a few things to watch tonight. Here are five things I'll be watching.

We saw Mychal Kendricks and DeMeco Ryans suit up against the Packers last week, but new Eagles ILB Kiko Alonso has yet to play this preseason. He has been battling tendinitis in the same knee where he tore his ACL a year ago. Alonso told reporters on Tuesday that he was going to play. We'll see. Even if Alonso plays, I would imagine he won't be in there very long.

No matter how much the Eagles try to say that Andrew Gardner has not locked up the starting job at RG, all indications say that he did weeks ago. The starting five along the OL is set. As for the backups, David Molk will almost certainly be the reserve center and Matt Tobin the primary backup at the four other spots along the offensive line. The final one or two spots are up for grabs. It will be a big night for players like Dennis Kelly, John Moffitt, Julian Vandervelde, Malcolm Bunche and others.

Can a 'non-special teams ace' safety win a job?

The Eagles have a pair of very good special teamers in Chris Maragos and Chris Prosinski at safety, but ideally, you would not want them playing safety in the regular defense. Maragos is a lock to make the final 53, while Prosinski's job is not assured. The two players to watch are Ed Reynolds and Jerome Couplin, who are more traditional safeties, as opposed to "special teams guys." Reynolds had a pair of picks in the first preseason game against the Colts, and Couplin has done some nice things as well. Can any of them stand out tonight?

The Eagles play the Jets Week 3 of the regular season, sooooo... even though the Jets are going to show nothing scheme-wise and their starters are going to sit, the Eagles will get an up close look at them? OK, I'm reaching.

I think this "battle" is already over. Personally, I think the Eagles should just keep two quarterbacks, but the Eagles seem to be set on keeping Tebow, and they're going to hang onto hope that they can get something in return in a trade for Matt Barkley until the bitter end. Barkley is likely not going to be on the team in a couple days from now, which makes this an extremely important game for him, as he'll essentially be auditioning for 31 other teams.