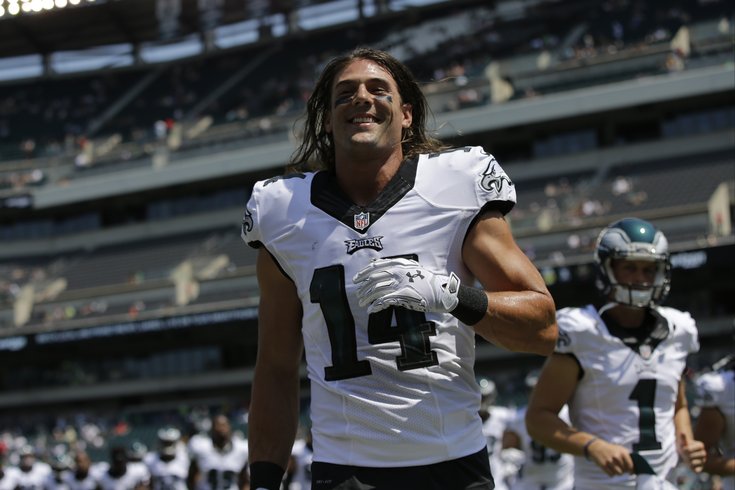 Like it or not, Riley Cooper isn't going anywhere.

With final cuts four days away, the futures of a number of high-profile Eagles remain unclear. Let's take a quick look at five of them, and projected whether they'll make the team or not.

Cooper is perhaps the most unpopular player on the team among the fan base, partly because of his racist rant two years ago, but maybe more so because he stunk last season. If you're counting down the days until Cooper is a goner, save yourself some time. He's not going anywhere. The coaching staff still likes Cooper, who is the best blocker in the history of blocking.

Smith was playing better than he played in camp a year ago, and then he got hurt, leaving the Eagles even thinner at OLB than they already were after they lost Travis Long for the season with a torn ACL. Smith has undoubtedly frustrated the Eagles' staff with his disappointing play for a guy they drafted in the first round. However, it would be a tough pill to swallow to cut a first round pick before he even entered his second year with the team, and the reality is that they actually need him.

Barner isn't as big a name as the rest of the guys on this list, but he was a star running back for Chip Kelly at Oregon who has stood out in the preseason games, taking two punt returns to the house. Can the Eagles keep four running backs? If they cut Barner, they have little chance of keeping him on the practice squad, as there will be a number of teams who will view him as a better punt returner than what they have.

On the flip side, what exactly does Barner do for the Eagles? They already have one of the best punt returners in the game in Darren Sproles, and Barner is never seeing the field as a running back unless a couple guys get hurt. So the question becomes, do you keep a guy who really can't help you much just because some other team may value him more? That seems like cutting off your nose to spite your face.

I wonder if Barner could potentially be flipped for another "back of the roster" type of player, perhaps at OLB, S, or OL.

Barkley just hasn't done enough to stick. He will always have a below-average NFL arm, and his other attributes do not make up for that deficiency.

Personally, I feel like the Eagles should release both Tebow and Barkley, as neither quarterback has looked good. Perhaps the move going forward is to just roll with two quarterbacks. However, as we noted back in the beginning of August, I got the strong sense talking with people with knowledge of the Eagles' thinking they intended to not only keep Tebow, but use him. Of course, they've had the chance to evaluate him over the last month, so there's always a chance they could change their minds. Still, I'm of the believe they will keep him, right or wrong.