Eagles' Jordan Matthews: I can be 'one of the greatest' receivers in the league 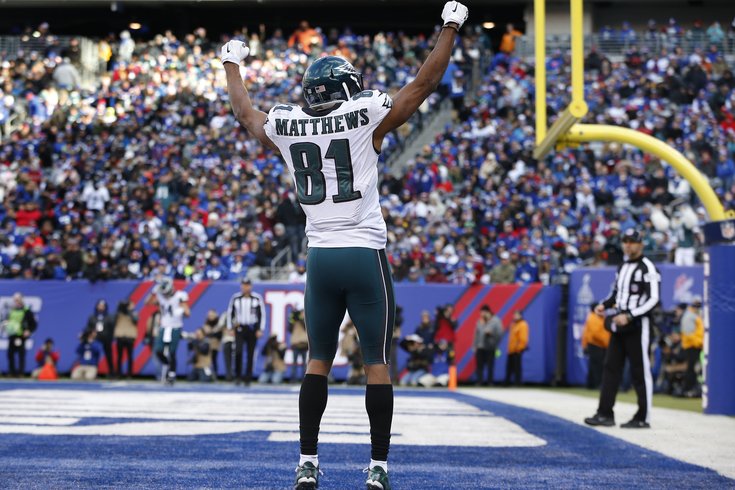 After a rookie season that proved he was one of the top talents in a 2014 draft loaded with talent at receiver, Philadelphia Eagles wideout Jordan Matthews -- much like the rest of his team's offense -- got off to a slow start this season.

Some of that was to be expected, even after he caught 10 passes for 102 yards in Week 1. He then went on a stretch of six games in which he failed to catch more than six passes in any game and only once had 60-plus receiving yards.

Matthews was now the top wide receiver, no longer drawing opponents' secondary attention while Jeremy Maclin demanded their main focus. Instead, he was surrounded by Josh Huff, Nelson Agholor, Riley Cooper and Miles Austin. He was also working with his third -- technically fourth when you consider that his rookie year was split between Nick Foles and Mark Sanchez -- quarterback in Sam Bradford.

What wasn't expected, however, was his sudden inability to hold on to the ball. Like many other Eagles players, Matthews' drops were a problem throughout the season. Even in Sunday's regular season finale against the Giants, Matthews dropped a perfectly thrown ball from Bradford that may have gone for a 80-plus-yard touchdown.

Through the first seven games of the season, the Vanderbilt product caught just 39 of the 63 balls (61.9 percent) thrown his way for 398 yards and just one touchdown. Over his final nine games, however, Matthews looked like a completely different player. He even looked better than in his breakout rookie season.

On Monday, while the Eagles were cleaning out their lockers, Matthews spoke about what he's learned about himself and his team through his first two seasons. And he wasn't shy about just how good he thinks he can be.

"People come to me with stats that I've had over my first two years, and I'm like, 'Dude, I haven't even touched what I can be as far as a receiver. I'm not even close to it.'"

"I think coming in as a rookie, there's a lot of things you go through," Matthews said. "There's a lot of great players around you, so you feel like, 'OK, if I just do this, I can just be in this kind of role right here and then I'll be fine.' But then, when you're in that role and you're just doing it over and over again, that's average. So you're like, 'If I just do better at this; if I cut out these mistakes and these missed opportunities; if I take advantage of this opportunity that my quarterback may give me or this thing or that -- I can be one of the greatest in the league.

"I think that's easily an attainable goal. People come to me with stats that I've had over my first two years, and I'm like, 'Dude, I haven't even touched what I can be as far as a receiver. I'm not even close to it.' So I guess those things [are what I've learned so far about myself]. This game's not too big for me. I know what type of player I can be."

He isn't wrong about just how good of a player he can be moving forward.

The turning point for Matthews this year seemed to come during the team's Week 9 win over the Cowboys, when he caught nine passes for 133 yards, including the game-winning touchdown in overtime. And then, over the final six games, he scored six times, including four in the last three games.

"My confidence over the last part of the season started to shoot through the roof," Matthews added. "And now -- I used to always go in and watch other guys on film to see what they were doing -- now I'm kind of like just watching myself. I'm like, 'Man, if I do this, I can get better in this area. If I do this, man, I'm not even worried about these other guys. I'm going to be just as good as anybody in the league..."

Unfortunately for Matthews, he won't just be adjusting to life under a new regime next season -- he may also have to get used to catching passes from yet another quarterback, as Bradford's return is anything but guaranteed at this point.