Eagles mini-camp observations: A bunch of the big dogs return to the field 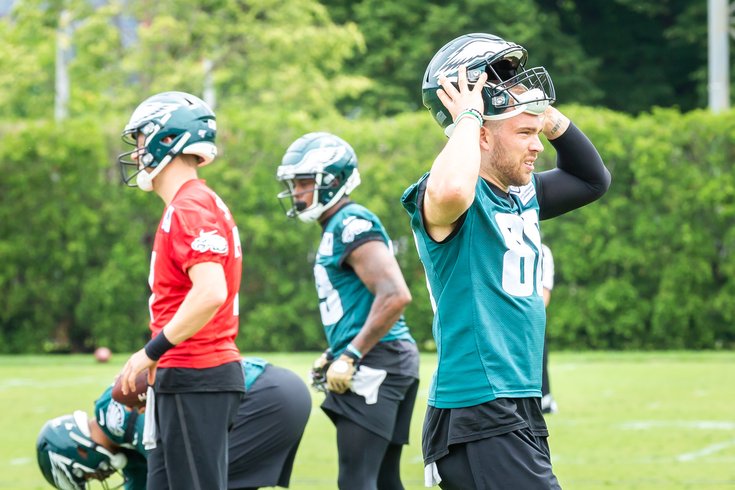 The Philadelphia Eagles will soon break for about a month and a half during the summer, but before they do, they have to get through a mandatory three-day minicamp, which kicked off on Tuesday. Even with guys like Lane Johnson, Jason Peters, Malcolm Jenkins, and Alshon Jeffery returning to the field, it wasn't a particularly exciting practice. Still, as always, we have notes.

• In his first practice, post-contract extension, Carson Wentz was good, as usual. Nothing flashy. Just good throws all over the field, and I didn't notice any obvious misfires. He had a quick day, as Nate Sudfeld and Clayton Thorson got the lion's share of the work. It's early, and he's just a rookie, but Thorson struggled again badly today after a rough end to OTAs a week ago.

• The highlight of the day was a simple out route by Alshon Jeffery. Sidney Jones had close coverage, but Jeffery violently threw Jones to the ground at the top of his route, getting wide open for the sideline throw. Of course, it was an obvious offensive pass interference call, but it was eye-opening physical domination.

On the one hand, it's good that Jones had close coverage. On the other hand, it was emblematic of his lack of strength.

• While he won't start this season unless Jason Peters goes down, Andre Dillard is going to get a ton of reps with the first-team offense this offseason. He got all the first-team reps in OTAs, and the majority of them in the first mini-camp practice today, as Peters got plenty of rest. The team will likely manage Peters' reps during camp to an extreme degree, which will help Dillard's development.

• Miles Sanders didn't practice today, and Doug Pederson said that he'll be held out for the entirety of this mini-camp, as (presumably) his hamstring continues to heal. In regard to concerns over Sanders' hamstring and the potential for him having an injury-plagued career, would I say it's time to crack each others' heads open and feast on the goo inside? Yes, I would, Kent.

• J.J. Arcega-Whiteside continues to impress. He caught the ball well today, and went down low for a red zone TD pass from Wentz. He also made a grab 30 yards down the field, again from Wentz, on a flea-flicker. With Wentz locked up for the next six years, and Arcega-Whiteside for the next four, it's important that they begin to build chemistry, which they have so far.

• Josh Sweat's speed and hustle was on display today as he chased down Donnel Pumphrey about 40-50 yards down the field. Sweat can move in the open field.

• There's usually one unknown receiver who manages to stand out in these early practices. This year that guy has been Marken Michel, who happens to be Patriots RB Sony Michel's brother. Michel caught a deep ball from Wentz, and several other passes at every level of the field. It's noteworthy that special teams coordinator Dave Fipp mentioned Michel as a player who has flashed early this spring.

The question for guys like Michel is whether or not they can consistently sustain their promising play through training camp and into the preseason games. They usually can't. We'll see.

• The worst drop of the day goes toooooo... Zach Ertz! A rare sight. L.J. Fort also had a bad drop on what should have been a gift INT. That's the second one of those that he has had during spring practices.

• During OTAs, we hadn't yet seen who the third safety in the pecking order is at this point in time, as both Malcolm Jenkins and Rodney McLeod were missing. With Jenkins back, Andrew Sendejo got the first-team safety reps over Tre Sullivan.

• For the first time this offseason, we have kicker notes! Jake Elliott missed a couple kicks during warmups (we don't count those), but he was 6/6 on the kicks during the special teams period. As always, we'll track all of Elliott's kicks throughout camp, because, well, I'm a nerd.