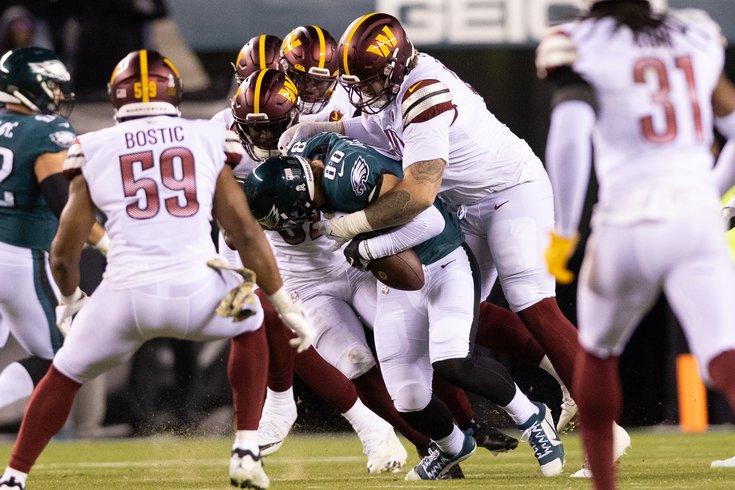 The Eagles had been getting more production out of the tight end position more than almost every other team in the NFL this season. Dallas Goedert was a beast, going for 48 catches, 551 yards and three touchdowns through the first nine games of the season.

Goedert's current IR stint with a shoulder injury sustained during the team's Monday Night Football loss to the Commanders is coming at a rough time with the Eagles' schedule progressively getting harder as the season goes on.

He was noticeably absent in the Eagles' comeback win over the Colts on Sunday, as the offense stalled until late in the fourth quarter with a backup tight end crew of block-first TE Jack Stoll, rookie sixth-rounder Grant Calcaterra and raw converted quarterback Tyree Jackson. The trio managed a whopping one reception for seven yards on one target (Stoll made the catch). Calcaterra, not known for his skill in the run game in the slightest, was called for a holding penalty that negated a first down on the team's first offensive drive. The Birds were forced to punt shortly after.

This isn't to deride these guys, who have well-defined roles: Stoll's a TE2 in the run game, Calcaterra offers some upside as a pass-catcher and Jackson is a developmental player the organization foresees playing a part in the future of the position in Philly. None of them, however, can match what Goedert does and are unfortunately being thrust into bigger situations they're not quite ready for.

Taking into consideration both production and the depth behind them, I'd say these are the Eagles' most indispensable players:

Lane is not just the best right tackle in football, but one of the best players in the NFL full stop. The Eagles do not have a true RT backup. Hurts is an MVP candidate and while Gardner Minshew may be the game's top QB2, Hurts' connection to these pass-catchers and running ability are huge for the Birds. Kelce is a Hall of Famer, but there is a promising backup with rookie center Cam Jurgens, so that's why I drop him to No. 4. Gardner-Johnson isn't a a top-five player on the team, but the safety depth is so, so shaky on this defense. He's been a Pro Bowler 10 games into the season too.

The Eagles had some of the best tight end depth in the game for more than a half-dozen years between the cast of Zach Ertz, Brent Celek and Trey Burton coming and going, plus Goedert's arrival as a second-round pick in 2018. In his first year as the franchise's unquestioned TE1 in 2022, Goedert has played like the best tight end in the league who doesn't have the last name Kelce. Calling a tight end a QB's security blanket is about as clichéd as saying that defense wins championship, but in the case of the Goedert-Hurts pairing, it's true.

Goedert's 31 first downs this season are third among tight ends this season behind Baltimore's Mark Andrews (32) and Kansas City's Travis Kelce (53). Few tight ends (if any) in league history can match what Kelce has done in his career, but Goedert had a legitimate shot at a Second-Team All-Pro nod before this injury squashed his chances. It would've been much deserved.

The Goedert injury stings even more so for Eagles fans because it came on the most infamous play of the season so far. Just as Washington linebacker Jamin Davis attempted to rip Goedert's head off with the most egregious face mask no call in the history of the sport, defensive lineman John Ridgeway also fell on him, causing the ball to pop loose with Washington recovering. The ensuing collision injured Goedert's shoulder. I can think of no greater example of insult literally being added to injury in Philly sports between that unfathomable "ref ball" no call and then a potential All-Pro missing at least a handful of games.

I'm of the belief that the Eagles should be running more four-wide receiver sets with Goedert out. A.J. Brown, DeVonta Smith, Quez Watkins and Zach Pascal are a damn good WR core. If Sunday in Indianapolis is any indication, however, tight ends are still going to see the field with frequency. Stoll played 81 percent of the offensive snaps against the Colts. Calcaterra played 28 percent. Jackson played 13 percent. That's heavy reliance on three unproven guys during a fight for a No. 1 seed and a first-round bye in the NFC.

I'm of the mindset that the player who should be seeing an increase in target share with Goedert on IR is Smith. He's the clear No. 2 target for Hurts now. Smith's nine targets in Indy were his most since the Birds win in Arizona in Week 5. He's certainly up for the task too. More balls going Smith's way, plus some new schematic wrinkles from Nick Sirianni and Shane Steichen, are a requirement, not merely a suggestion, if the Eagles want to keep pace at the top of the conference with Goedert missing this much time.

There is the expectation that Goedert will return before the end of the regular season. It can't come soon enough for the Eagles.