DeVonta Smith is becoming one of the NFL's best route-runners 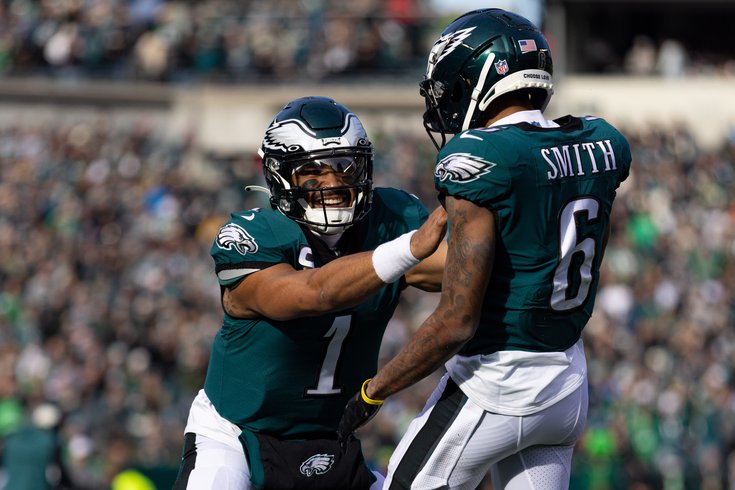 DeVonta Smith possesses the ability to make hard plays routine. On the Eagles' first drive of the game against the Titans on Sunday, the tandem of Smith and Jalen Hurts methodically carved up the Tennessee defense. Smith's precision may have looked effortless, but that speaks to his technique as a wide receiver, as he's quickly becoming one of the game's best route-runners.

Something as simple as a third down pitch and catch illustrates that the Eagles nailed it when they traded up to draft the Heisman Trophy winner last April. Smith makes Titans cornerback Trey Avery look foolish, planting his foot and cutting on a out route that had him open as anything for an easy completion.

Here's a glimpse of the play:

Third down, Jalen Hurts to DeVonta Smith for a first down. pic.twitter.com/kI5TVL78oa

While Smith is certainly a dynamic athlete and playmaker, he's not going to always create separation like a prototypical speedster deep threat. He creates separation with his route running, a skill that becomes a necessity the deeper you play into the winter as teams face more talented secondaries on the way to a potential Super Bowl run.

"I think DeVonta has been going the whole year," head coach Nick Sirianni said about Smith in his postgame press conference. "This guy is a phenomenal route runner."

Speaking about that above play, Sirianni remarked, "That first third down, the thing he did on that route shows you just what — go back and look at that. I mean, someone will send me that this week zeroed in on that and someone writing an article about that because it was beautiful."

"He's clean out of the break," Sirianni continued. "He does everything well."

Smith's target share has been a little uneven this year. There was hysteria after he had a zero-catch performance in Week 1 only for Smith to put up a seven-catch, 80-yard performance in a Monday Night Football win over the Vikings the next game. Right after that was his bonkers 169-yard game against the Commanders down in Landover. Smith's number isn't always called upon because of how multifaceted this Eagles offensive attack is, but when it is, Smith is up for the task.

During the middle chunk of the season, Smith seemed to be the No. 3 target in the Eagles' passing offense behind A.J. Brown and Dallas Goedert. That says less about Smith and more about Brown showcasing himself as an elite wideout and Goedert established himself as a top-two tight end in the NFL. With Goedert missing time due to injury, I recently wrote that the coaching staff must make Smith a larger part of the offense to compensate for losing a pass-catcher of Goedert's caliber. Run-heavy game plans against Indianapolis and Green Bay suppressed his numbers, but when the occasion called for the Eagles to air it out like it did against Tennessee, Smith was right there to bust things open with the first touchdown of the game:

.@JalenHurts to @DeVontaSmith_6 for the 34-yard TD!

While Hurts turned in a hell of a game on Sunday, this touchdown throw wasn't one of his best passes of the day, really. Smith adjusted his route, came back for the ball and forced his way into the end zone. Bang.

The Eagles organization has done everything possible to put Hurts in a position to succeed, maximizing his rookie contract timeline in the hopes of winning another Super Bowl. Brown was the splashy acquisition this offseason (for good reason!), but the 2021 Smith pick set a foundation and baseline to help QB1. Don't be surprised to see the Brown and Smith both top 100 receiving yards in a game come January (or February). I'm sure Smith will have defensive backs on skates if that happens.
Follow Shamus & PhillyVoice on Twitter: @shamus_clancy | @thePhillyVoice