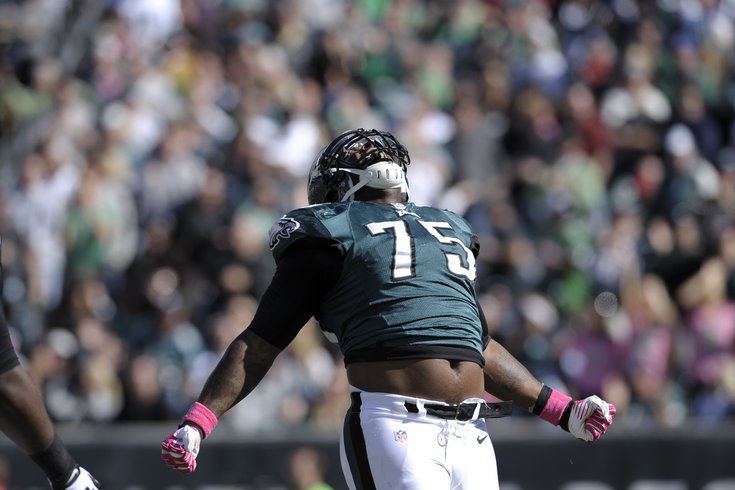 This shouldn't come as a big surprise, but Vinny Curry is the Eagles' top immediate priority to get signed to a new contract among their free agent crop, per a source.

Curry's chances of being wanted back by the Eagles went up considerably when Chip Kelly was fired, as the Eagles are certain to have a defensive scheme that will better suit Curry's skill set in 2016 under Jim Schwartz. Curry is arguably the Eagles' best pure pass rusher, and he needs to see the field more. The Eagles want to lock up Curry to a long-term deal before they have competition in March if Curry hits the open market.

Our Joe Santoloquito had a long talk with Lane Johnson about the Eagles' "season from hell," during which Johnson revealed that he and the Eagles are working out a long-term deal:

“I’m talking to the Eagles (about a contract extension) and I want to stay here and retire an Eagle,” said Johnson.

That jibes with what Ed Kracz of Calkins Media is hearing:

Sources have indicated offensive lineman Lane Johnson could have a contract extension in place by the end of the week.

What about Fletcher Cox?

In Kracz's piece, Kracz noted that the Eagles are speaking with Cox.

Utilizing the team option after four years is something the Eagles did with Fletcher Cox, a first-round pick in 2012. Cox’s team option was picked up heading into last year and he is now under contract for 2016. At the end of the season, Cox will be a free agent. The Eagles are negotiating with their Pro Bowl defensive lineman, according to a source, to prevent Cox from hitting the open market.

Cox is obviously an outstanding impact player around whom the Eagles should build their defense. However, the Eagles have Cox under contract in 2016 at around $8 million, and they can use the franchise tag on him if they need it next offseason. Cox's contract, if and when it eventually gets done, is going to be massive. Therefore, because the Eagles can have Cox under their control through 2017, they really have little incentive to rush into a new deal, and should be angling for a team-friendly one.

Cox is already a star player. Everyone recognizes that. If he puts up huge numbers in a 4-3 under Jim Schwartz, his value may only increase marginally over what it already is. Conversely, from Cox's perspective, if he suffers a devastating injury in 2016, his value could take an enormous hit.

Cox and his agent Todd France will want to maximize Cox's worth, as they should, but the Eagles have more leverage here. I wouldn't hold your breath on this one.

Could the Eagles look to deal Connor Barwin?

Connor Barwin was a perfect fit as a "Jack" linebacker in the Eagles' previous 3-4 defense. He is an imperfect fit in a 4-3 defense. Is he a DE? Is he a SAM linebacker? Do you try to use him creatively in some kind of hybrid role?

Barwin is a very athletic player, and I believe that he can still be a quality starter in a 4-3 scheme. However, if the Eagles can work out a deal with Curry, they will have two capable starters in place at DE in Curry and Brandon Graham. If there's another team that is willing to give up something worthwhile for Barwin, trading him would be a savings of $6.15 million on the Eagles' cap.

Tom Brady has 22 playoff wins. The Eagles have 19 in the entire history of their franchise:

Brady was unable to extend his playoff win lead to four over the Eagles against the Broncos last Sunday. Take THAT, Tom.

Today begins the week of Senior Bowl practices. All week long down in Mobile, Ala., quality college football prospects will be evaluated on and off the field by scouts and front office people at the Senior Bowl, which should be of particular interest to Eagles fans. Since 2010, the Eagles have drafted more players competing at the Senior Bowl than any other team in the NFL.

In case you missed it, we took a look at 10 players on offense and defense who should interest the Eagles:

• 10 players who could interest the Eagles at the Senior Bowl: Offense edition

• 10 players who could interest the Eagles at the Senior Bowl: Defense edition

We'll be in Mobile, Ala. all week.