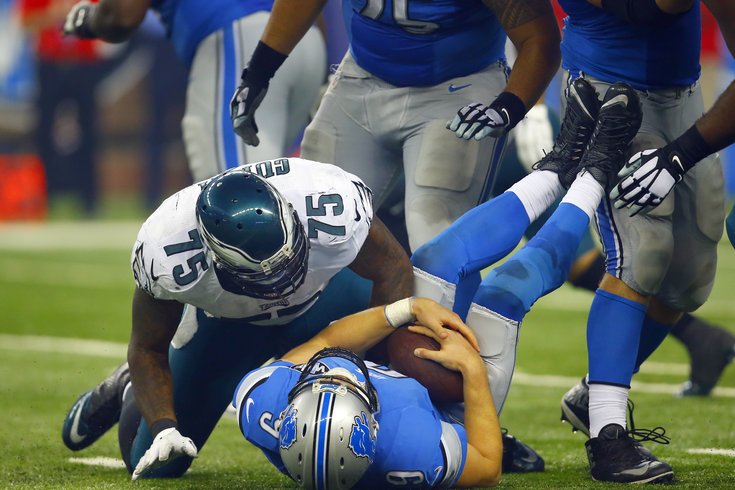 Maybe Vinny will get to play now.

As with any re-organization, whether it be in sports or any other profession, a lot of employees are affected by top-level change. In the case of the Eagles' roster, some players were valued more highly by Chip Kelly and his staff than other coaches might value them. Other players were not valued nearly enough, or used in a way that would maximize their effectiveness.

Here are five players who have the most gain and five with the most to lose by Chip Kelly's firing.

1) Vinny Curry: There's an argument to be made that Vinny Curry is the Eagles' best edge pass rusher, but he never got to play as many snaps as he (and the rest of the fan base) would have preferred. With a likely move away from a two-gapping 3-4 scheme, Curry should have more chances to (A) play more, and (B) attack up the field, assuming the Eagles try to bring him back.

2) Fletcher Cox: Even though he played at an All-Pro level this season in the Eagles' 3-4 front, I can't help but imagine what Cox's numbers would have been as a three-technique in a 4-3. Attention, next Eagles defensive coordinator -- Get Fletch lined up one-on-one against opposing guards as much as humanly possible. They can't block him.

3) Marcus Smith: Even if the Eagles move to a 4-3, Smith could be a decent fit as a SAM linebacker, and he could be rejuvenated (or perhaps just juvenated) by a new staff.

4) DeMarco Murray: While a big part of the blame for Murray's disappointing season falls on Murray himself, there's little question Kelly did not use him properly. Theoretically, a new staff will let Murray be the "north-south" runner Kelly promised he would be.

5) Trey Burton: Burton was a valued core special teams player, but he should have gotten more playing time in the regular offense, in my opinion. Ideally, the new staff will recognize his skill set.

1) Riley Cooper: For coaches who prioritize blocking from their wide receivers, Riley Cooper was basically Michael Jordan. For the rest of the population who prefer their receivers be able to do wide receivers things like catch the ball and then run with it, Cooper has had very little value the last two years. Cooper will almost certainly be cut by the next Eagles' head coach.

2) Brent Celek: Chip Kelly loved Brent Celek. A new coach may see the numbers Zach Ertz amassed at the end of the season (35 catches, 450 yards the last four games), and deem him ready to be his starting TE. Celek is scheduled to make $5 million next season, will no penalty if the Eagles cut him. A new coach is unlikely to want to allocate $5 million to a backup TE.

3) Mark Sanchez: Sanchez has the eighth-highest salary cap number on the team this season. The Eagles can save $3.5 million if they get rid of him. Kelly liked Sanchez; a new staff may not want to pay him that kind of money to be an average backup with no ceiling.

4) DeMeco Ryans: Mufasa was the poster-child for #culture, which the new staff may not need to rely on as heavily. Ryans is an outstanding leader, but his play is in decline. The Eagles' new staff will have to decide if Ryans' leadership is worth the $3.5 million they'll save if they release him.

5) Taylor Hart and Brandon Bair: Whether the Eagles switch back to a 4-3 from their 3-4 or not, there's a good bet they will not employ the same two-gapping techniques from the guys up front. In more of an attacking-style of scheme, Hart and Bair will not be good fits.